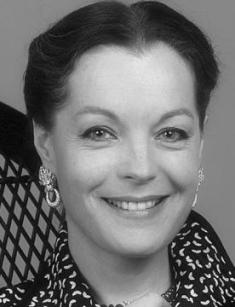 Rosemarie Magdalena Albach known as Romy Schneider was born at the end of September 1938 in Vienna. She was destined to become an actress: her mother, Magda Schneider, was the star of the German cinematography, and her father of the Austrian origin, Wolf Albach-Retty, descended from an actor’s family and continued followed in the footsteps of his predecessors.

The parents spend all the time at movie sets. Romy and her brother Wolf-Dieter’s grandparents took care of the children. When Romy turned four, Magda and Wolf divorced, and the kids were sent to a Bavarian village to their grandparents. Soon, the mother married a Cologne restaurant keeper Hans Herbert Blatzheim, and the actress Trude Marlen became the father’s new wife. The children, who had not been the priority, were left with no parental attention.

In the fall 1944, Rosemarie entered an elementary school. Five years later, she continued her education at a girls’ boarding school at the Augustinian Canonesses near Salzburg. As one of the nuns confessed in an interview, the mother rarely visited her daughter; the father and grandmother never did.

The girl was artistic and could not bear Sciences; she was good at painting and singing and loved History. Romy lived in the boarding school until 14. Nuns complained to the teenager’s mother that she was naughty and difficult to deal with; besides, Romy played truant. As the young woman left the school, she was going to enroll at Cologne Academy of Fine and Applied Arts, but life turned out to be different from the plans.

The beauty began her cinematographic career at 15. Her mother was offered a lead part in the melodrama When the White Lilacs Bloom Again; the actress asked the director to audition Romy for the role of her character’s daughter, and he agreed.

When the girl learned the news, she was on cloud nine: it was her cherished dream. Young Rosemarie looked brilliant at the auditions, and her first movie came out in November 1953.

The next year, Schneider appeared in the second project, Fireworks, where she personified Anna Oberholzer. Her character left her house to work at a circus. It was the actress’s first appearance as “Romy Schneider” in the credits.

The director Ernst Marischka noticed the young talent; he was so fascinated that gave Romy the lead part in Victoria in Dover and rejected Sonja Ziemann who had gained it before. The movie was a tremendous success, and underaged Romy Schneider became a greater star than her mother.

In 1955, the artist collaborated with Magda Schneider for the third time. The whole family gathered together at the movie set of Die Deutschmeister: Romy’s father played the lead character. Once again, it was a success. Within two or three years, young Schneider turned into the German celebrity.

The international fame came with the historical movie Sissi about the youth of Empress Elisabeth of Austria; Romy was 16. The audience loved the project so much that two more parts were filmed immediately. Six million people watched the trilogy in two years.

Schneider’s stepfather Hans Herbert Blatzheim was her manager; he worked with her finances and controlled role offers. However, he was not particularly interested in Romy’s abilities. When she refused to appear in the fourth movie about Sissi so that she would not become a one-role actress, their relationship deteriorated. The man insisted his stepdaughter should participate there, but Romy stood against his will.

In 1958, the artist joined the cast of the fateful movie: Christine not only brought her DEM500 000 but also let her meet Alain Delon, then little-known French actor. The sudden romance made the German celebrity leave her country and follow her lover. The beauty moved to Paris, but France was pretty indifferent to the actress.

The breakthrough took place when Schneider met Luchino Visconti. The director offered Romy collaborate with her husband in the play ‘Tis Pity She's a Whore. It was a new page in the artist’s career.

The director introduced Romy to Coco Chanel, who instilled sophisticated manners in the young woman and taught her to understand fashion. Diets, exercises, and swimming pool visits became an integral part of Romy’s life. As the actress said later, three people changed her: Delon, Visconti, and Chanel.

The play was premiered in March 1961. Ingrid Bergman, Shirley MacLaine, and Jean Cocteau visited it. From that time, Romy enjoyed numerous offers from French directors.

In 1961, the woman participated in new Visconti’s movie Boccaccio ‘70 and the screen adaptation of Franz Kafka’s The Trial. In the latter project, Schneider played Leni; she believed it was the best part in her career. Romy received the prestigious French prize, Étoile de cristal.

The 1963 movies Victors and The Cardinal were welcomed by critics; The Cardinal gave her the nomination for the Golden Globe. However, the woman’s personal life was a disaster, and she had depression for a year. Romy came back only in 1965 in the comedy What's New Pussycat? Woody Allen created the script. The same year, Schneider came back to her home country.

In the late 1960s-1970s, the actress worked a lot. She had brilliant roles in Ludwig and César et Rosalie starring Yves Montand. It was Romy’s career peak; she could choose projects and directors to collaborate: Richard Burton, Jean-Louis Trintignant, Klaus Kinski, Jane Birkin.

Romy met her ex-husband in the movies The Swimming Pool and The Assassination of Trotsky; the media watched every movement of the former couple. The woman worked hard and appeared in several movies each year as if she felt it was the last decade of her career and life.

In 1973-1974, within ten months, she took part in five movies. Le Train, Un amour de pluie, Love at the Top, The Old Gun, Mado, and That Most Important Thing: Love (L'important c'est d'aimer) were the most notable projects in the 1970s. The latter brought her the first César Award. In the early 1980s, the woman appeared in La Banquière, Fantasma d'amore, and La Passante du Sans-Souci.

Alain Delon was the most significant man in Romy Schneider’s life. Their painful love lasted for several years only, but the echoes of the fateful passion reflected for the rest of her life. When the actress was touring in the United States, she learned about Delon’s romance with Nathalie Barthelemy. She hoped it was just another journalists’ rumor. However, when she came back to Paris, she found only an empty apartment: Delon married Barthelemy.

The actress’s suffering was unbearable; she tried to commit suicide. Later, she threw herself at work and came back to Germany. Soon, she married the director Harry Meyen and gave birth to the son David. Everything seemed to have come to normal; Romy felt happy.

In the 1960s, Alain Delon returned to her life: his call was out of the blue. The actor divorced his wife and got involved in some problems. He also asked Romy to co-star with him in the movie The Swimming Pool. Tabloids expected something spicy, although both artists claimed their love was the matter of the past.

In fact, Romy could not choose between her husband and Delon; her life was chaotic. Soon, newspapers published the photo of Alain and Romy kissing at an airport; Meyen could not tolerate that and divorced. Two years later, he hanged himself and used Romy’s scarf. The actress accused herself of the director’s death.

Finally, the woman got another chance to feel happy: she fell in love with her personal secretary, Daniel Biasini, and married him. In 1977, the daughter Sarah was born, but the child together could not save the family: the couple split up three years later.

They filed for divorce in 1980. The next year brought the tragedy that killed her: 14-year-old David tried to hop across a steel fence and died. It was the last drop for the woman; her heart could no longer bear it. She tried to distract herself by new projects; the loving person, the French producer Laurent Pétin, was there for her. Still, Romy did not recover; she drank heavily and took antidepressant drugs.

At the end of May, Romy Schneider and Laurent Pétin moved to Paris; they were discussing plans for the weekend and purchase of a new house. On May 28, the actress did not go to bed in the evening; she said she wanted to listen to some music. On May 29, 1982, in the morning, Pétin found her dead: she was sitting at a desk, leaning forward.

Romy’s manager and personal photographer shut out the possibility of suicide: the actress was working on a new project with Alain Delon. No autopsy was performed to show respect for the woman. Cardiac failure was supposedly the cause of death. Romy Schneider was buried at Boissy-sans-Avoir, Yvelines. As Alain Delone insisted, David was reburied in his mother’s grave.