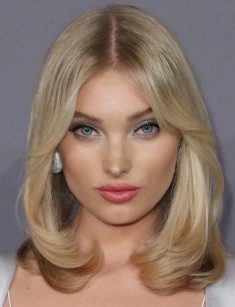 Elsa Hosk at the Cannes Film FestivalElsa Hosk in underwearElsa Hosk is a world-famous Swedish top model. In her youth, the girl with an unusual appearance did not want to dedicate her life to a modeling career. But nowadays she appears on the covers of fashion magazines and walks the runway with Victoria's Secret catwalk wings behind her.

Elsa was born in Stockholm. She grew up with boys. Her parents also brought up two sons, elder Johan and younger Lucas. From an early age, the girl has liked sports, and she was interested in basketball as a teenager.

Nature gave Elsa unique facial features, blond hair and inward slant of the blue eyes. The father told about the beautiful appearance of his daughter and advised her of the modeling business, but the girl just brushed it off. She cherished the dream of becoming a professional basketball player.

Then the father decided to develop his daughter’s career on his own. He presented her a photoshoot gift certificate. Elsa did not agree to participate in it but eventually went to the photographer. After getting the photos, the father submitted photographs to various modeling agencies that he knew. Representatives of the modeling business also appreciated the girl’s beauty who was only 14 years old. Besides, Hosk differed from other girls of the same age because she was much taller (her height is177 cm).

Elsa often received job offers from the many modeling agencies. She became immersed in fashion shows, photo shoots, and commercials. However, the modeling business did not gain the heart of the teenager. Elsa perceived the job as a game which would soon come to an end.

Sports still attracted her. After graduating from school, Hosk searched for a basketball club, where she could show her abilities in basketball. But, unfortunately, she realized that representatives of this sport had almost no future in Sweden as it just was not developed. Elsa succumbed to the persuasions of her father and started a professional modeling career.

At the beginning of her career, she had to work hard to become known again. In adolescence, Elsa began to abandon the proposals of companies after working for a while. Gradually, they stopped calling her at all. However, it took only a few months, and the representatives of the modeling business showered the bright Swede with job offers again.

At first, she worked in her homeland, and two years later she traveled around Europe, filming in England and Germany. Then she moved to America, where her life changed forever. The model met the famous photographer, Ellen von Unwerth. The woman took photos of the girl for Guess commercial. Since then, her career has flourished.

The brand Victoria's Secret noticed the blond Swede, and in 2011 Elsa Hosk already participated in the first fashion show of the legendary American underwear brand. At first, she represented the company's youth clothing. The efficiency, unusual appearance and her talent as a model did their best, and Elsa soon signed a long-term contract. Four years later, she got the cherished "wings" and became one of the 12 "angels" of the brand.

The girl quickly climbed to the stardom of the modeling business. She has become a high-paid and popular top model. Magazines showered Hosk with job offers. In 2015, Elsa also appeared on the covers of four famous magazines, including Marie Claire and Fashion.

The Swede has become the face of world-known brands of clothing, cosmetics, and perfumery. She participated in the advertising campaigns of H & M, D & G, Oriflame and even Dior.

Sometimes Elsa is compared with other models. In 2016, looking at the new Harper's Bazaar issue with the beautiful Swedish girl on its cover and the spread, women of fashion saw that Elsa was similar to the Russian model, Alena Shishkova. However, it is worth mentioning that Timati’s ex-girlfriend looked very much like the Swede before she underwent plastic surgery.

Hosk is also remarkably similar to the top model of South African descent, the Victoria's Secret Angel, Candice Swanepoel. Elsa admitted in an interview that fans often compared her with this girl, but she added modestly:

"Candice is a real goddess for me, and I am very far from her perfection."

By the way, fans of haute couture often mention, looking at the semi-nude model, that her body is far from perfect.

The body measurements seem close to perfect according to figures: 79/56 / 89. She has broad shoulders, typical for athletes, small breasts, and full plumpish hips. People can see it when the young woman wears a swimsuit, especially if the paparazzi take pictures of Hosk and she does not have time to make a cute pose.

From early youth, Elsa Hosk’s personal life has been full of love affairs. The pretty girl has always had a lot of admirers. In high school, she had her first romantic relationships with a classmate, Patrick. Since 2008, the Swede dated musician and countryman Andreas Kleerup. The relations were serious and lasted long. Her relatives even talked about a possible wedding. However, they dated for only four years.

There were rumors in the press that the model had the love affair with Norman Reedus, known for the series The Walking Dead. Fans wondered with whom Elsa was in the photos taken by the paparazzi. The girl hid her private life, without giving clues even on Instagram. Later, photographers managed to find out the identity of the man.

In 2015, Hosk’s boyfriend was Tom Daly, the owner of the eyewear company District Vision.

Her exotic appearance becomes a reason for suspicion that the girl underwent plastic surgery or at least rhinoplasty. The model does not disclose the truth. But when fans compare childhood photos with the latest photos, they invariably conclude that Elsa has not undergone any surgery. Regular sports training helps to control the weight around 52-54 kg. In addition to basketball, she likes boxing, pilates and heaving exercises.

Elsa Hosk often visits social events. In 2017, she delighted everyone wearing a vaporous gown at the Cannes Festival. At the cocktail party of the brand de Grisogono, the girl wore a sheer dress with see-through underwear. Fashion experts noted that the garment was surprisingly devoid of vulgarity. However, the Victoria's Secret Angel was not the only woman who chose such a bold image at the festival. Madonna and Charlize Theron also delighted guests with the dresses that they wore on the red carpet.

In June of the same year, Elsa Hosk, along with other “angel," Sara Sampaio, appeared in a new video for Justin Bieber’s song "2U". In early 2018, she pleased her male fans with the "Hot" photos on Instagram. The blond model posed in the bedroom in front of the mirror without clothing.

Elsa is trying her hand as a designer. She has recently introduced her brand of swimsuits. 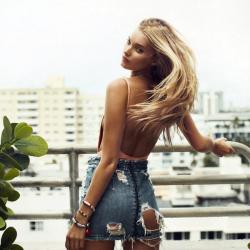