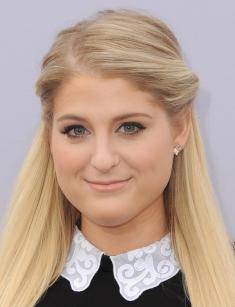 Meghan Elizabeth Trainor is an American pop singer, a producer and a songwriter, who won the «Grammy» in 2016 as the best aspiring actress. Such hits as "Lips are moving" and "All about that bass" are mostly well-known.

Meghan Trainor was born on the island of Nantucket, located in the U.S. state of Massachusetts on December 22, 1993. Her father Harry Trainor and uncle Burton Tony were directly related to music - one worked as a church organist, the other as a recording worker that is why the girl was interested in musical instruments from an early age. At the age of 7, Meghan began to play the piano, later, the guitar, ukulele and percussion instruments. The future singer wrote her first song as a child at the age of 11.

When her intentions became more serious, her parents gave Meghan software that allowed her to record her own songs. At that time she went to high school, and she had to combine general education and music, the trumpet game in a jazz band, singing in the local group Island Fusion, honing the skills of playing the guitar.

Two years in a row - in 2009 and 2010 - Meghan was invited as a participant to the 5-week concert program of the Berklee College of Music, where she entered the final songwriting competition.

By the way, she was named as the best female performer at the international acoustic music award in 2009, and she became the main prizewinner at the festival of songwriters in New Orleans in 2010.

Meghan had recorded a couple of albums with her own songs by the time she turned 18 - "Only 17" and "I will sing with you", thanks to her great ambition and hard work. Her parents strongly supported the singer, they often took her to regional conferences for songwriters. Such events allowed young talents to be heard, and one of them led Trainor to the first big step in her musical career.

Officially, the creative biography of the singer began at the age of 18, when Meghan Trainor signed a contract with Big Yellow Dog Music in Nashville. After the deal was made, the girl's first big dream came true. She realized that she could make a career on her own music and lyrics. Big Yellow Dog began to offer songs of Trainor to artists who later won «Grammy» such as Rascal Flatts, Sabrina Сarpenter and many others.

The next step in Meghan's career was a contract signing with the music label Epic Records. In June 2014, the singer released her first single "All about that bass", which became a hit. Epic Records offered the song to other artists but nobody agreed that is why Trainor decided to record it herself.

This track, dedicated to all women whose bodies differ from the ideal parameters of Barbie dolls, took for the first month the top lines in the music charts all over the world, and the clip scored 1.6 million views on YouTube.

Meghan's next singles - "Lips Are Moving" and "Dear Future Husband", though not as stunning hits as the previous song, made it to the top 20 of pop music and scored tens of millions of views on YouTube. This helped Trainor to release her debut album.

The disk "Title" was released in January 2015 and soon became number one in many countries. The release of the soundtrack "Better When I'm Dancin'" for the cartoon "The Peanuts Movie", the shooting the video for the song" Marvin Gaye" with a singer Charlie Puth, the record of the single "I like the sound of that" together with the country band "Rascal Flatts" and, most importantly, the nomination for " Grammy" and a further victory also became great creative success of Meghan Trainor in 2015.

In May 2016, the singer released her second studio album "Thank you", which included such hits as "No", "Me Too" and "Better" (with Yo Gotti). In 2017, Trainor posted the song "I'm a Lady", which became the soundtrack to the cartoon "The Smurfs: the Lost Village".

In 2018, the singles for her upcoming third album "No excuses", "Let you Be Right" and "Can't Dance" were released. It is known that the release of the new album titled "Treat Myself" will take place on January 25, 2019.

The personal life of the singer and the songwriter was never a secret for fans - she actively puts the photos of her boyfriend Daryl Sabara on "Instagram". He is a 26-year-old American actor, best known for his role in «Spy Kids».

The guy proposed to the singer on the day of Meghan's 24th birthday, a year and a half after the beginning of the relationship. A happy girl posted a video of this event in her profile. Daryl gave her the wedding ring, traditionally standing on one knee under a tunnel decorated with Christmas lights.

Their relatives and friends came to support the couple. A girl could not hide emotions and crying from happiness. According to foreign media, the wedding of lovers will be held in December 2018. The couple has no children.

It is also known that in 2015, Meghan Trainor was forced to cancel the tour of the United States "MTrain" because of the constant problems with the vocal cords. The girl had two operations to eliminate hemorrhage in the vocal cords. She published a statement in her microblog:

"Unfortunately, I have to cancel the rest of the tour and do the surgery to fix it once and for all. I'm devastated, scared, and very sorry."

Today, a successful singer and a happy girl prepares for the release of the third album, discusses with her future husband and family the upcoming wedding celebration, gathers crowds of faithful listeners at her concerts, and she fights for the rights of people with large forms.

Now the girl is proud of her figure (with a height of 164 cm Meghan`s weight is 68 kg), she calmly agrees photo shootings in a swimsuit and revealing outfits, though she complexed about it very much earlier. Her boyfriend helped her to accept herself, who, according to Trainor, admires every inch of her body. The singer continues to write songs that inspire people to love and accept their bodies.