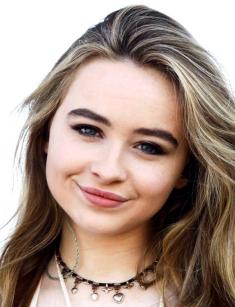 Sabrina Carpenter is a young American star who builds a creative career in two directions-film and music. The actress has been acting since 2011 and Maya Hart is considered to be her most star role in the Disney series "Girl Meets World" to date. A debut mini-album of the singer "Can't Blame a Girl for Trying," which was released in 2014, topped the youth music charts and received "Radio Disney Music Awards."

Sabrina Ann Lynn Carpenter was born on May 11, 1999, in Lehigh Valley, Pennsylvania. Her father is David Carpenter and her mother is Elizabeth Cartwright. The official biography of the artist does not mention the profession of the parents. It is known only that one of the sisters of the mother is the actress Nancy Cartwright.

David and Elizabeth have three daughters – Sarah and Shannon and Sabrina. Also, the girl has an older sister on her father, Cayla. She works in the beauty industry (hair stylist). Shannon is engaged in dancing and Sarah does music and now sings in backing vocals at her younger sister.

The singer's family call her Sab, who attended "The Pennsylvania Cyber Charter School". Sabrina wanted to be a librarian because of her love of books in her very early childhood. But in 2006, Disney channel launched the series Hannah Montana with Miley Cyrus in the lead role. The girl dreamed of only one thing to learn to sing and dance from that moment.

The future star began to take piano and guitar lessons. She took part in the competition "Are you a Star," organized by Miley Cyrus at the age of 10. The show lasted more than a year; the jury considered the video with musical numbers sent by the participants.

Sabrina entered the top three winners, leaving behind more than 10 thousand contestants. At the same time, the girl began to publish on "YouTube" her covers; she sang all the songs of her favorite singers Adele and Christina Aguilera.

"I loved to have fun and dress up. I went to dancing school at the age of 10 because I had performed in public, and it was my favorite time because I could apply much more make-up than a little girl can afford," Sabrina recalls that period with a smile.

The actor's debut of the young Carpenter took place in the series Law & Order: Special Victims Unit. The girl got the role of a rape victim, a serious and challenging job. According to Sabrina, thanks to such difficult specific, she was able to finally make sure that she made the right choice regarding her future profession.

The debut was successful and resulted in new offers. In 2012, Sabrina played many episodic images in the films Gulliver Quinn, Noobz, The Unprofessional. Special agents made her schedule next year because many projects were shot in parallel and it was necessary to coordinate the participation of the young actress.

Sabrina played young Chloe in the TV series of Fox's The Goodwin Games, appeared in the form of 13-year-old Merrin Williams in the fantasy-drama Horns with Daniel Radcliffe and Juno Temple; she appeared in the youth sitcom Austin & Ally.

All of this was only a warm-up before the first significant role in her filmography - Maya Hart in the series Girl Meets World (it is known as Stories Riley in the Russian hire ). Carpenter played the close friend of the main character, Riley Matthews, and Rowan Blanchard embodied her image. In contrast to the calm, thoughtful Riley Maya is the active, wayward rebel, funny and amorous. Sabrina became a permanent heroine of the series during all three seasons that it went on TV – from 2014 to 2017.

"Maya and I like to make good friends, and we're both caring, confident and very sarcastic. Maybe I'm not as frank as Maya, but I'm as confident," - says the actress.

Sabrina starts singing career almost immediately with the filming of Stories Riley. In 2014, the debut mini-album "Can't Blame a Girl for Trying" was released. The title song of the CD with this title was previously aired on Radio Disney and was released on iTunes. The singer also performed the soundtrack to the series Stories Riley.

In 2015, her full-format debut album "Eyes Wide Open" was released on "Hollywood Records," which was enthusiastically received by both fans and critics. The album won the "Radio Disney Music Award 2016".

The next album of the singer called "Evolution" is released in 2016. At the same time, Sabrina announced the start of a big tour in its support. A striking hit of the album was the song "Thumbs," which the artist performed at the ceremony of "Radio Disney Music Awards 2017".

At the same time, in 2016, Carpenter began acting in the TV movie Adventures in Babysitting and took part in the voicing of the animated series Milo Murphy's Law. In 2017, she toured Europe with the band "The Vamps" and went on a summer tour with "New Hope Club" and released the single "Why."

In 2018, Sabrina starred in the crime drama The Hate U Give, and it is about a girl named Starr, who witnessed the murder but cannot tell anyone about it because of personal reasons. Carpenter played a friend of the main character.

In May this year, the artist released the single «Almost Love "from the future album" Singular: Act I," which included such hits as" Paris", "Sue Me." The video for the last song broke all records on the Internet. The girl flashes in different outfits on the video, also appearing in a swimsuit.

The album was released in November 2018.

The fans of the actress and singer call her little Sabrina due to her miniature size (her height is 61 feet (156 cm)), she turned from the awkward teenager into an attractive girl in front of the public. Of course, her personal life is of universal interest.

Firstly, Carpenter was credited with an affair with the actor Bradley Perry. Then Sabrina's boyfriend was called Corey Fogelmanis, her colleague on the set of the series Girl Meets World.

Probably, the assumptions caused the joint photo of the pair on Instagram of the actress. The star calls this relationship platonic.

In 2019, fans of the artist expect her appearance in the new film The Short History of the Long Road. Sabrina has the main role in this film.