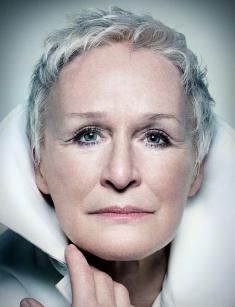 Glenn Close is an American theater and movie actress, the six-time nominee for Academic Awards, two-time owner of the Golden Globe Awards, a three-time winner of Emmy Awards. In her filmography, she has more than 80 works. TV spectators know her on the role of the major villain Cruella De Vil in the movie 101 Dalmatians and also on the pictures Dangerous Liaisons, Fatal Attraction, and others.

Glenn Close was born on the 19th of March, 1947 in Greenwich, in the State of Connecticut. Her parents are representatives of the aristocracy. The girl's father, William Taliaferro Close worked as the doctor, as well as her grandfather who was a founder of the American Association of the hospitals in due time. Her mother Bettine Moore was an American public figure and philanthropist. Glenn had two sisters and two brothers. However, one of her brothers died in the infancy because of the congenital heart defects.

There are a lot of famous relatives among the ancestors of Glenn Close - the U.S. President Ulysses Grant, the model Brooke Shields and even Princess Diana. Glenn spent her childhood in Congo where her father was working. There he opened the clinic and also became the personal doctor of the country’s president Mobutu Sese Seko.

When the girl was seven years old, her parents became the members of the conservative missionary sect Moral Re-Armament (MRA). The girl was already growing a humble and shy child and after her parents had joined the sect her life changed considerably. Everything was forbidden to her: she couldn’t communicate with people who weren’t members of the organization, she wasn’t allowed to watch TV, to read books which weren’t from the provided lists. During fifteen years she was under the sect and didn't know how to escape from it as her consciousness was destroyed.

During some time she lived and studied at the boarding school in Switzerland. But the actress shudders when she remembers this period shudder. In one of the interviews, she told that even sewage pipes were twisted with barbed wire so that no one could escape from this place.

At the age of twenty-two, the girl entered College of William & Mary where she began to act in the local theater at Howard Skammon. This allowed her to believe in herself and to break the ties with the sect.

Glenn Close debuted on Broadway, the performances with her participation were highly appreciated both by the spectators and the critics. Her part of Norma Desmond in the musical under the title Sunset Boulevard became the brightest work in the theater. The actress has great vocal skills. Glenn received three Tony Awards for her brilliant theatrical works.

What about the movies, the actress began to appear on the screen already being mature – at the age of thirty-five. The director George Roy Hill noticed the actress and invited her to play the major role in the movie The World According to Garp. Robin Williams and Mary Beth Hurt became her colleagues on the movie set. Right after the release of the movie Glenn was nominated for Academic Awards.

Next year she was nominated for prestigious movie award again – for the role in the picture The Big Chill. And a year later she received the role in the movie The Natural.

There were two pictures in the filmography of the actress which brought her true popularity. In 1987 she performed in the movie Fatal Attraction where she played the role of Alex Forrest – the woman who was painfully obsessed with the passion. And in 1988 there came out on the screen the movie Dangerous Liaisons in which Glenn got the role of the intriguer Marquise Isabelle de Merteuil. Both of these roles were also nominated for Academic Awards.

After this Close began to have the stereotype of having the image of angry and not always the mentally healthy heroine. Even Glenn recognizes that her filmography is a dream of the psychiatrist.

Cruel and unscrupulous flayer Cruella de Vil in the movie adaptation of the animated series 101 Dalmatians is one of the most well-known roles of the actress. It’s curious that in real life the woman really adores the dogs. She even created the blog about the pets of the famous people and interviewed colleagues, asking about the details about the "star" dogs.

In 1997 the actress performed the role of the tough politician in the high-grossing thriller Air Force One. In 2003 the actress took part in the movie The Lion in winter directed by Andrei Konchalovsky in which she received the role of Eleanor of Aquitaine. For this role, Glenn received Golden Globe Awards and a prize of Screen Actors Guild.

The last nomination for Academic Awards which Close received was the nomination for the role today on the Oscar for a role in the movie Albert Nobbs. The woman received an extremely unusual role – she played the role of the man. In due time she already had to perform the role of this man but in the theatre. Both the audience and movie critics were in indescribable excitement from the acting of the actress.

Once in the closing store, Meryl Streep received all the clothes which she had chosen as a present. The sales-assistants adore the movie Fatal Attraction with the participation of Glenn Close. And Glenn herself repeatedly told that she was often taken for Meryl. And once she told that she felt pity that the jury of Academic Awards didn’t confuse them with each other. In general, since long time ago Close became one of the unlucky persons of Academic Awards Ceremony.

In 2007 the series Damages came out on the TV screens with Glenn Close in the major role. She played the role of Patty Hewes – a ruthless, unscrupulous and clever leader of the law firm in New York. For this role Close received Golden Globe Awards and two Emmy Awards. In 2009 Close received her own star on Hollywood Walk of Fame.

In 1969 the actress married the musician Cabot Wade. But three years later their marriage came to an end. During a couple of years, she met the actor Len Cariou. In 1984 she decided to get officially married again, the businessman James Marlas became her beloved man. Unfortunately, this marriage also didn't last for long, and in 1987 the couple divorced.

Since then the woman began to be very serious about the marriage. That’s why when she began to meet the producer John Stake, she did not insist on the marriage. They have lived together for five years, and the actress gave birth to their daughter Annie Maude Starke.

By the way, the girl decided to follow the example of her mother and to become an actress. For example, she played the episodic role in the movie Albert Nobbs. And in 2017 there came out the movie The Wife where the mother and the daughter played the same character but in different periods of time.

In February of 2006, all mass media spread the information about the fact that Glenn Close married again. The chemist and the biophysicist David Evans Shaw who was far from the movie industry became her spouse.

They got acquainted at the charity event. Unexpectedly for herself, the actress at once liked this man and felt trust in him. It was interesting for them to communicate with each other, they traveled a lot and walked together. In a short time, she relocated to Manhattan to the countryside of the State of Maine to live with David.

When on the web there appeared the information about their divorce, some fans of the actress didn’t believe in it. As the fans considered that at last Glenn had found her long-awaited family happiness. But this information was confirmed when the woman announced that they stayed friends with David. They have lived in their marriage or nine years.

In January of 2018, there came out the comedy under the title Father Figures in which the actress played the major role of the mother of two grown-up brothers. The guys are sure that his father died. Though, it turned out that during all this time their mother was lying to them and didn't know herself who was their father. When the brother decides to find their real father, they learn about their mother more information, than they wanted.

Moreover, Glenn Close is included in the cast of the movie Easter. There is no exact information about the premiere of the movie yet. In general, the actress continues to take part in the movies and to look for new types and roles.

Glenn doesn’t have an Instagram page though there are some fan pages. It’s true that since 2015 the actress created a page on Twitter where she regularly shares news wither fans. But nevertheless, she prefers reading books in the garden surrounded by her favorite dogs more than spending time in the social networks. 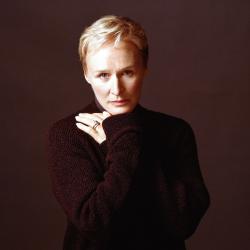