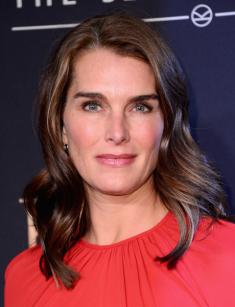 Brooke Shields is an American model and actress. Brooke Shields has been the youngest model ever to appear on the cover of Vogue. She became a famous actress after playing the leading role in the cult film The Blue Lagoon about the hippie subculture.

Brooke Christa Shields, better known as Brooke Shields, was born in late May 1965 in Manhattan, the historical site of huge New York City. According to some reports, Brooke's parents broke up when the girl was five years old, according to others, she was only several months old. Her mother, Teri (Theresia) Shields (née Schmon) took care of the daughter. The woman was born in a poor large Jewish-Catholic family and tried to become an actress desperately. Theresia worked as a make-up artist and model. The absolute opposite of the wife was Brooke’s father Frank Shields whose ancestors were the representatives of the royal families of France and the UK.

After the divorce, Teri Shields raised her daughter, seeing her as a future movie star and model. It seemed that Theresia Schmon pushed Brooke to fulfill all her shattered ambitious dreams.

Brooke Shields made her screen debut when the girl was not even a year old. Brooke advertised products for children with her mother. Soon the baby, who could not even stand up well, already had several commercials in her credentials. During her school years, young Shields attended film sets more often than school.

In 1980, when Brooke Shields was 15 years old, the model appeared in somewhat controversial and provocative ads for Calvin Klein jeans. The advertising slogan meant that the model did not wear underwear. Brooke set a record becoming the youngest model ever to appear on the cover of Vogue magazine.

At the age of 16, Brooke became one of the most famous and highly paid models in the world, just as her mother planned. Time magazine reported in 1981 that Brooke Shields’s day rate as a model was $10,000. In addition to photo shoots, Brooke also participated in the fashion shows because the girl had suitable model measurements (Shields was 6.00 ft. (183 cm) tall, and her weight changed in adolescence but did not reach today's 143.3 lbs. (65 kg)).

But fame had the reverse effect. Due to her work schedule, the teen supermodel had to live in front of the camera almost all day long. Fans, including mentally unbalanced people, chased the girl everywhere. Brooke was threatened more than once. Scandalous articles often appeared in tabloids. Shields almost lost her childhood and adolescence.

The role of a young seductress, Violet, a 12-year-old prostitute, who lived in a brothel in New Orleans, was quite provocative. In the film, Violet's mother (Susan Sarandon), auctions her daughter's virginity for $ 400. Teri Shields agreed to this role, not paying attention to the opposition of the girl’s father. The movie brought Brooke Shields the dubious fame of a sex star.

Scandalous rumors and speculations appeared in the press, which was a bad influence on the mental health of the young actress. The girl had to visit a family therapist. The path to glory was thorny.

In 1980, the movie, which turned Brooke Shields into a real movie star, was released. It is a romantic film about the love of two teenagers on a deserted island. The Blue Lagoon immediately became a cult film of hippies, downshifters, and nudists. However, Brooke became the first nominee for the Golden Raspberry Award in history. Nevertheless, it did not affect the growing popularity of Shields.

Young actor Christopher Atkins played the leading male role. During the shooting, the main problem was the fact that the model was about 0.32 ft. (10 cm) higher than her partner in the film. Therefore, the actress stood in a specially dug holes in the sand while shooting the joint scenes with Atkins.

The Blue Lagoon was followed by another sensational film in which Brooke Shields got the starring role again. It is the romantic movie Endless Love, which made the actress the face of the '80s. The photos of the beautiful lady regularly appeared on the covers of fashion magazines.

At the age of 17, Brooke suspended her career to study. For a while, she attended Princeton University and performed on the theater stage, but soon returned to filming. The movies The Diamond Trap and Brenda Starr contributed to her fame and huge incomes.

In the 1990s, Brooke Shields proved to film critics and viewers that her fame was not accidental. The actress played diverse roles in the films Backstreet Dreams and Freaked. She portrayed each character brilliantly. Brooke also appeared in popular TV series Friends and Law & Order.

One of the actress’s most favorite projects is the melodrama series Two and a Half Men, in which Brooke starred for six years since 2004.

Shields also had career failures. Film critics did not appreciate the movies Hannah Montana and Lipstick Jungle. However, this unpleasant experience was followed by success. The actress managed to regain her former glory after the release of the horror film The Midnight Meat Train, in which fans and critics saw new Brooke Shields. The actress appeared as an attractive owner of an art gallery.

In 2008, Brooke Shields played a leading role in the comedy-drama Lipstick Jungle, based on the novel by Candace Bushnell. The series tells about the lives of three friends, all of whom are very influential people in New York. Brooke portrayed a director of the fictional film studio Parador Pictures.

Viewers consider the projects The Boy Who Cried Werewolf and Castro's Daughter to be Brooke’s most successful latest films. They were released in 2010. In 2011, Brooke Shields brilliantly played Joan Brown in the melodrama The Greening of Whitney Brown. Critics praised her interesting and talented acting in the film Chalet Girl, in which she portrayed the heroine, Caroline.

In Autumn 2013, Brooke Shields appeared as a guest star and played a minor role of Deborah, Ian's girlfriend, in the comedy series The Michael J. Fox Show. In early 2014, the sitcom was canceled due to low ratings. The television series set an anti-record because The Michael J. Fox Show was recognized as the lowest-rated sitcom of the fall/ winter 2013-2014 in America.

In the mid-1990s, Brooke met Andre Agassi, the King of Tennis. They married after two years of dating. But it transpired that the family life was not as cloudless as the love affair. Brooke's career declined; on the contrary, Andre was doing alright. Brooke dreamed of children, and the tennis player considered it inopportune. In 1999, the couple divorced.

After the divorce, Brooke Shields improved her personal life. Her acting career was also on the rise. The actress was invited to great Hollywood projects again. The witty comedy The Bachelor was released, making viewers talk about Brooke. The actress met a colleague and producer, Chris Henchy, on the set of the comedy film Suddenly Susan. After the torrid love affair, they celebrated the wedding in May 2001. Two years later, Brooke gave birth to the first long-awaited child, daughter Rowan Francis. The second girl, Grier Hammond, was born three years later. The happy family lives in a mansion in Florida.

Brooke Shields writes memoirs in her spare time. In 2014, she published her autobiography “There Was a Little Girl: The Real Story of My Mother and Me," in which the star frankly told about the unpleasant events of her life.

In 2017, Brooke continued to film, playing a cameo role. The actress appeared in the Netflix variety special Michael Bolton's Big, Sexy Valentine's Day Special, which premiered on February 7 and was timed to coincide with St. Valentine's Day.

The drama Sandy Winters is scheduled to premiere in 2017, in which Brooke Shields will play the leading role of Sandy Winters.

In July 2016, Calvin Klein officially announced that Brooke Shields would reunite with the brand after a 37-year break. In February 2017, the fashion house already promoted an advertising photo session which resembled the previous photos of Shields. The model first starred in the campaign of the brand when Brooke was 15 years old. This advertising campaign is still considered one of the most famous advertisements for fashion brands. The net worth is $25 million.