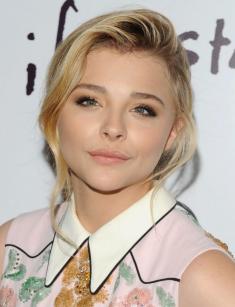 Chloë Moretz is a young American actress and model; she is the spokesperson for Aéropostale and MaxMara.

Chloë Grace Moretz was born on February 10, 1997, in Atlanta. The family was quite wealthy: the father worked as a plastic surgeon, and the mother was a nurse. Chloë has four brothers.

In 2002, Chloë, her mother, and elder brother moved to New York: Trevor was accepted in a theater school. The girl took an interest in acting as well and repeated the brother’s monologs. Although it was weird for the five-year-old child to quote A Streetcar Named Desire by Tennessee Williams, she was sure she wanted to become an actress.

The young talent debuted in Hollywood: she appeared as Violet in two episodes of the series The Guardian. As for the big screen, Chloë participated in Heart of the Beholder about the family that opened a video rental shop in their home.

The actress was noticed for the movie The Amityville Horror, the remake of the popular 1970s horror. Chloë personified Chelsea and was nominated for Young Artist Award. Soon, the girl strengthened her positions by the movie Today You Die. At the same time, Moretz worked on several series, such as Desperate Housewives.

2010 was marked with the triumph. The role in Kick-Ass brought much recognition, although the movie itself was severely criticized and received only one star out of five. Chloë learned to do all the tricks on her own. In 2011, Moretz won MTV Movie Awards – Best Breakout Star and Biggest Badass Star.

The same year, the actress had to chance to collaborate with two masters: Martin Scorsese (Hugo) and Tim Burton (Dark Shadows). Besides, she played a vampire girl in the movie Let Me In, the remake of the Swedish horror. Finally, 2011 brought the tragicomedy Hick.

In 2013, Chloë Moretz accepted the invitation to Kick-Ass 2; in a while, she got the starring role of Carrie White in Carrie based on Stephen King’s novel. The next year, Moretz gained the Saturn Award – Best Young Actor/Actress for this project.

2014 was fruitful for the artist: she had many lead roles. At the beginning of the year, she participated in the drama Laggies about adult life issues and readiness to marriage. In the action movie The Equalizer, Chloë personified Alina.

The part in the drama If I Stay was worth noticing. It is the story about the young woman whose soul must decide whether she would stay on earth or leave for the other world. The same year, Chloë played the young and scandalous woman, Jo-Anne Ellis, in the drama Clouds of Sils Maria that showed the lives of two aged actresses, competition, and pitfalls in this sphere. In the family comedy Muppets Most Wanted, Moretz received the role of Newspaper Delivery Girl.

In January 2016, the sci-fi thriller The 5th Wave starring Chloë Moretz came out. It is the world where periodical alien aggression takes place; by the moment the movie stars, three attacks on the planet have been carried out. Earth is destroyed everywhere, and epidemics are spread; aliens come to the planet secretly. Chloë personified Cassie Sullivan who tried to save from the next attack and find her missing brother.

In May 2016, the woman played the lead character in the comedy Neighbors 2: Sorority Rising. The sequel of the popular movie pictures the war between a couple and a sorority nearby.

In September, the actress appeared as the protagonist in the drama Brain on Fire. As the story runs, Susannah Cahalan wakes up in a mental hospital; she does not remember how she had been delivered there, and doctors’ diagnoses are not confirmed.

Chloë Moretz began to act in her childhood and attracted many people. Due to her young age, she did not have roles related to sensitive content.

Gradually, the child actress transformed into a teenager and young woman; however, there were no naked photos. Moretz never appears without clothes in front of cameras. In Kick-Ass 2, she was wearing black strings; the audience saw the actress’s body was far from being childlike. Besides, the artist appeared partially naked in the movie Carrie.

Chloë is fond of fashion; famous magazines publish her photos on their covers. Besides, the young woman tried herself as a photo model despite her not-so-modeling sizes (105.82 lbs. or 48 kg. and 5.35 ft. or 163 cm.). Chloë has collaborated with Flaunt, Jalouse, Love Magazine, Crash Magazine, InStyle; even the leaders of fashion Vogue, Teen Vogue, Marie Claire, Interview, and Elle worked with her.

The family is the most important thing for Chloë. Two of her brothers are gay, and Moretz promises to blacklist homophobic fans who will talk sharply about the actress’s relatives or other LGBT people.

Chloë has a verified Instagram account; she prefers black-and-white photos and light-gray or pastel frames. There are few non-stylized pictures in the young woman’s page; overall, it looks like an art gallery. More than 15 million people follow the actress.

The artist separates her personal life and art; she does not tolerate the paparazzi in her private affairs. At the beginning of her career, Chloë worried about rumors and speculations spread by journalists. When she asked them where their information had come from, they said the actress’s close sources provided them with various details.

After that, Moretz started spreading unbelievable rumors about herself; every acquaintance received different ideas. Thus, the woman tried to find out who sold stories to the media. As a result, Chloë realized that her family was the only reliable circle.

The actress avoided talking about her boyfriends for a long time. However, in May 2016, she shared some details at The Late Late Show with James Corden. Chloë confessed that Brooklyn Beckham, the son of the famous soccer player David Beckham and the singer Victoria Beckham, used to date her.

The same year, the actress was involved in an ethical scandal. She was to voice the character in the animated fairy tale Red Shoes and the Seven Dwarfs. The new interpretation of the story showed the fat princess and the red shoes that could save the prince and transform the young woman, particularly, make her slim; however, the shoes spoiled her character.

Chloë was outraged by the project campaign: the original slogan emphasized that Snow White stopped being beautiful. Similar to the actress, many fans noticed that fatness did not mean ugliness. The movie representatives took away the posters and apologized.

The same year, the actress participated in the fantasy thriller Suspiria that shows the boarding ballet school where witches reside and organize a coven. Besides, the actress appeared in the drama The Miseducation of Cameron Post.

Soon, the audience will have the opportunity to enjoy the actress’s voice in the animated movie The Addams Family.