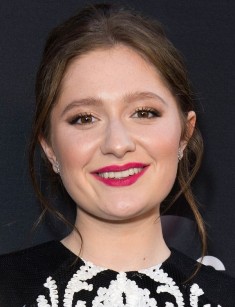 Charming Emma Kenney has filmed since early childhood. She became famous for the role of Debbie Gallagher on the TV series Shameless. A casting manager noticed her acting talent when the girl was eight years old. So she got the first role in a feature film, which was followed by work in popular TV series and projects as a screen and voice actress. Nowadays, Emma is not a teenager anymore, but the pretty woman is on the cusp of breaking into the great movie.

Emma Rose Kenney was born on September 14, 1999, in Manhattan, New York City. Her father, Kevin Kenney, is a criminal defense lawyer. The mother, Gillian Kenney, is a sports writer who worked for the New York Post and Fox Sports. Her mother has Caucasian ancestry.

The girl spent her childhood in New Jersey. The future actress grew up with her brother, but unlike him, she began to show interest in acting early. Her parents enrolled their daughter in acting classes to develop her talents. Five-year-old Emma attended them together with her friend Sierra Jill.

The girl used her acting skills shooting in advertising. A casting manager noticed her at one of the auditions which became her second home. The talented 8-year-old girl played a bit part (the daughter of one of the heroes) in the short film Lyre Liar, making her debut in a very serious genre of a crime drama.

The same year, the girl got a second role. This time it was a leading one. There are almost no dialogues in the art-house movie Bittersweet, but the little actress showed her dramatic talent even better portraying the heroine without words.

Then Emma tried her hand at directing. At the age of ten, she released her short film The New Girl In Town at the New Jersey International Film Festival, and it participated in the final competition. Perhaps at that time, Emma began to love this profession. Now she says:

"Definitely, I like to direct the process more than just to film."

2009 was fruitful for young Emma. The actress starred in two short films A (Not So) Civil Union and Three Little Puppets. In the last movie, the girl got a leading role again. That year, Emma also made her debut on television, playing in two children's TV series Green Apples and Day Camp. At that moment, she did not know that in a few years she would become the star of American TV, playing the role and developing together with her screen character.

In 2011, the comedy series Shameless about the Gallagher family premiered on the Showtime channel. The father, Frank, is an idle man who lost himself into drinking, and his wife separated from him, leaving six children (four sons and two daughters). The children are not perfect; moreover, they try to deal with their problems, which further aggravates the situation.

When the mother left the family, the oldest daughter, Fiona, took care of the younger children, but her personal life is unhappy. Older brother Phillip struggles with alcohol addiction, younger Ian is a homosexual, suffering from bipolar disorder. Finally, the youngest brothers, Liam and Carl, are a drug addict and a psychopath.

Emma Kenney played the youngest daughter, Debbie. If in the first seasons, her heroine is a cute teenager who helps her older sister to take care of her brothers and father, then in the fifth season she becomes a troubled teenager who suffers from inferiority in the family, low self-esteem and some problems that are typical for children at that age.

“Debbie is neat and tidy, but very clumsy, besides she feels like an outcast in the family. She is trying to show her relatives the reason. She wants her family to be normal,” Emma describes her character.

The set of the series brought the actors together over the years. According to Emma, she had the warmest and friendliest relations with actress Emmy Rossum, who played her on-screen sister Fiona, and Ethan Cutkosky, who portrayed Carl.

In the USA, the series Shameless was a great success. So, in 2016 the producers officially renewed it for the eight seasons, and a year later for the ninth season. By then, Debbie’s life had already changed. The girl became a single mother and a professional welder.

The role in Shameless made Kenney a wealthy girl. She earns $ 12,000 per episode, and each new season sees a 4% wage increase. When journalists asked her whether it is difficult to have such a busy working schedule for so many years, Emma replied that she tried not to keep her professional life separate from personal life, because Shameless was just a show, it should be treated accordingly.

Moreover, Kenney has time to play in other projects. So, in 2013, the girl participated in the voicing of the animated film Epic, alongside such stars as Amanda Seyfried, Colin Farrell, Beyoncé.

Emma Kenney belongs to the people who try to hide their personal life. She protects it from the public. One day she said that she fell in love with actor Dylan O’Brien, but later Emma did not comment on it. Fans can only guess whether their favorite actress has a boyfriend or not.

Nonetheless, the actress is open to her fans. She communicates with them on Twitter, posts photos on Instagram, where she is depicted with her colleagues on the set, wearing a fashionable dress at a party or a bathing suit near the pool, with adorable dogs in a shelter or eating her favorite pizza in a cafe.

By the way, the actress eats only vegetarian pizza, she is an active animal rights advocate and does not consume meat, planning to stop eating fish in the future. Emma’s figure only benefited from such a diet. Previously, the girl had excess body weight, but then she noticeably slimmed down (the actress is 170 cm tall).

From October 2018, the new long-term TV project The Conners appeared in Emma’s filmography.

This series is a spin-off continuation of Roseanne, which was a resounding success on American television in the 1980s and 1990s. Kenney plays a girl named Harris Conner. Her acting career continues to develop. 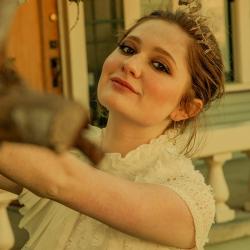