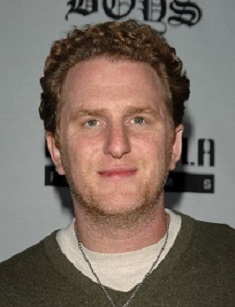 Michael Rapaport is an American comedian and actor. He starred in around 160 movies including TV shows, but before that, he was a stand-up comic. Since childhood Michael has really wanted to become a sportsman, but then he understood that there is no place for him in the world of sport, so he decided to talk about sport in many ways.

Michael was born in New York in 1970. His parents, June Brody and David Rapaport, both worked on the radio: June was a radio personality, and David was a radio manager. Then they divorced, and June married Mark Lonow who was a comic, and he owned The Improv, a comedy club.

Rapaport has a brother, Eric Rapaport, and half-sister, Claudia Lonow, who is also an actress and comedian. Michael’s family has lived on the Upper East Side of Manhattan. He has Polish Jewish and Russian Jewish descent.

When Michael was 19 years old, he moved to Los Angeles to become a comic. His stepfather helped him in this business, and the future actor has been doing it for three years.

His first acting part was the role of Kravits in the TV series named ‘Chine Beach’ (1988-1991). That was his first appearance in the acting world.

In October 2008, Rapaport announced that he was in the process of creating a documentary film about hip hop collective named ‘A Tribe Called Quest’. The movie ‘Beats, Rhymes & Life: The Travels of a Tribe Called Quest’ was released in 2011 and received a lot of positive reviews.

In 2014 the film ‘30 for 30’ premiered at the Tribeca Film Festival. Michael was the director of this movie, and it was about the 1970s championship-winning New York Knicks.

Michael has appeared on lots of podcasts including I Am Rapaport Stereo Podcast, The Monday Morning Podcast with Bill Burr, Mailtime and Pardon My Take by Barstool Sports, The Adam Carolla Show, The Fighter and The Kid, Anna Faris is Unqualified, The Bill Simmons Podcast and its predecessor, The BS Report; The Chive Podcast, WTF with Marc Maron, His & Hers Podcast, Cari Champion's Podcast, The Joey Boots Show, The Dirty Sports Podcast and that’s not the end of the list. On I Am Rapaport Stereo Podcast Michael shares his funny, robust, honest and sometimes offensive opinion on any topic: movies, music, sports and everything that is going on in the whole world.

In 2017 Michael posted on his Twitter that he would join the popular sports satire website named ‘Barstool Sports’ where he will be a correspondent for the podcast Pardon My Take. But less than in one year he got fired from Barstool Sports after posting a rude comment about their fan base. At the present moment, Rapaport is a reporter for Fox Sports.

Michael is really into sports. We can see it in his social media, for instance, Instagram. In 2017 he had an emotional reaction about benching Eli Manning, an American football quarterback for the New York Giants. On November it was announced that Manning would be benched and replaced by Geno Smith in Week 13 against the Oakland Raiders. This was shocking for a lot of fans, Rapaport included. He posted a video where he speaks to the coach, Ben McAdoo, using profanity to let him know how stupid his movement is.

Another issue is the relationship between Michael and the Ball family which consists of LaVar Ball, the media person, and businessman, and his sons who are basketball players, Lonzo Ball, LaVar Ball, LiAngelo Ball, and LaMelo Ball. Let’s look at the quote from Rapaport’s Instagram:

It’s not a secret that Rapaport was never shy in his reviews. For example, when in 2018 Eminem released his new album named ‘Kamikaze’, Michael commented this on his Twitter that this creation of Eminem is «pissin, shittin, disrespectin so many creators, so many rappers».

But sometimes Michael can’t express himself completely. Once there was the Instagram clip that was a collaboration between one man who owned a funny cat named Wilfred Warrior and Michael. Shortly, there was a cat that looked a little bit unusual and Rapaport was yelling at him. But Instagram deleted his video because there is anti-bullying stance and it seems to extend towards domestic animals too.

Speaking about other exciting stories connected to Michael and society, there was a situation in 2018 after which he was called a hero. That happened on an American Airlines flight from Houston to Los Angeles. Rapaport was in the first class, and suddenly he noticed the guy who was trying to open the emergency exit's door. Let's look at how Michael himself talked about this event on his podcast:

"I got up out of my seat, half sleeping, with my headphones in my ear, and I put my hand on his shoulder, like 'What the (explicit) are you doing?' He had two hands on the lever. I said it three times, loud. The second time I said it, he still had his hand on the (explicit) thing. ... I sort of pinned him against the seat. This is happening all in about 45 seconds."

In the end, other passengers and flight attendants helped move the man away from the door, and the flight landed fine.

In 2017 he also wrote the book called ‘This Book Has Balls: Sports Rants from the MVP of Talking Trash’. This work had a success; Michael used his smack-talk style and a lot of humor for discussing really interesting sports details, some great and some awful sportsmen.

On May 18, 1997, Michael was arrested for harassing his ex-girlfriend, Lili Taylor. After they had broken up, he called Lili 21 times in four days and on the fifth day he showed up at her apartment and banged on her window. The next day Lili went to the police. Then he pleaded guilty to the charges in court and New York Supreme Court Justice Arlene Goldberg issued a protection order to keep the actor away from Lili Taylor and to undergo the counseling sessions. Michael’s lawyer Paul Shechtman has told that Rapaport has respect for his ex-girlfriend and he is happy to leave this situation behind him.

In 2000 Nichole Beattie, a writer, and producer, became Michael’s first wife. They had two children and then got divorced in 2007. His kids’ names are Julian Ali (named after the legendary boxer, Muhammad Ali) and Maceo Shane (named after the rapper Vincent Lamont Mason).

In 2016 he married his girlfriend, Kebe Dunn, with whom he had a long-time relationship. They are still together now.