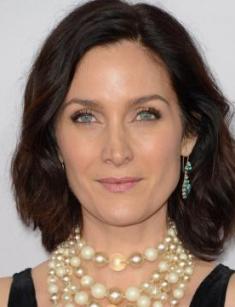 Carrie-Anne Moss with her kidsAs soon as Carrie-Anne Moss personified cold, tough Trinity in legendary The Matrix, millions of fans all over the world loved the unknown actress. The woman herself is quite the opposite: she is a cheerful and open person, a loving mother and wife.

Carrie-Anne Moss was born on August 21, 1967, in Burnaby, British Columbia, Canada. The child was named after the song of the English rock group The Hollies: their song “Carrie Anne” was popular when the would-be actress was born; her mother, Barbara, liked the band.

The girl had a brother, Brooke, who was three years older. Barbara had to bring up the kids on her own, with no support from the father. Further on, the family moved to Vancouver.

Carrie-Anne liked acting. She joined a children’s musical theater at eleven and participated in a European tour with a choir as a high-school student.

At first, the young woman was building a modeling career. In 1985, Moss moved to the capital and reached some success in the late 1980s. Although she did not sign any lucrative contracts, the beginning model visited Japan and Spain and entered the world of cinematography and show business.

Carrie-Anne debuted on the TV screen in Spain when she gained a role in the series Dark Justice. In 1992, the artist moved to Los Angeles and entered the American Academy of Dramatic Arts. The 1990s did not bring notable parts: she worked on TV series as an episodic and supporting actress.

Thus, the fame after the legendary Wachowski’s movie The Matrix was even more unexpected and overwhelming. It is interesting that the woman had appeared in the Canadian series under the same title a while before that: it had nothing to do with the fantastic action, though.

The project was premiered on March 31, 1999, and immediately got movie lovers’ recognition. Even those who do not watch fantastic movies are familiar with the plot. Intelligent machines use human body warmth and energy to provide their existence. They created the Matrix, the imaginary world. People are put inside it and have no idea their lives are only illusionary. Everybody is only a product to be consumed.

A group of rebels manages to escape from virtual reality and begins to fight the machines. Moss personified Trinity, the hacker wearing latex clothes and helping the main character, Neo, destroy the Matrix’s agents. The project starred Keanu Reeves and Laurence Fishburne who also became famous.

The plot of The Matrix is ambiguous and has much philosophic subtext. It was the object of broad discussions that gave much food for thought. On the wave of the commercial success, the sequels of the machine-created world, The Matrix Reloaded and The Matrix Revolutions, followed in 2003. Moss participated in all three parts of the trilogy.

Filming was pretty challenging for the cast: the numerous fighting scenes required physical training and basic martial art skills. It took about four months. Moss had her leg broken but endured pain to keep the iconic role and did not tell the movie creators about her trauma.

Soon after The Matrix, the actress received many new offers; she appeared in Red Planet with Val Kilmer and the drama Chocolat nominated for the Academy Award.

2000 was marked with the low-budget psychological thriller Memento with Guy Pearce. It is the story about an insurance investigator who is looking for his wife’s murderer. After a head injury and amnesia, the man has to leave notes for himself so that he would not forget the events of the past. Moss had a secondary role and won the Independent Spirit Award in 2002. Critics’ reviews were mostly positive.

In 2007, the celebrity played one of the main characters in the thriller Disturbia about a young man sentenced to home detention. Locked in his house, he is studying people around him and tries to solve his father’s murder mystery.

2015 was marked with the first season of the series Jessica Jones based on Marvel comics. The actress personified the female version of Jeryn Hogarth. The second season of the project was presented at the beginning of March 2018.

Carrie-Anne Moss married the actor Steven Roy in 1999. The couple has three children: the sons Owen and Kaden and the younger daughter Frances Beatrice.

The actress is close to her mother and brother. However, the details of their lives are unknown, just like Moss’s private life. The woman prefers to keep secret the lifestyle of her nearest and dearest.

Maria Bello, the star of the series ER and the movie A History of Violence, is the artist’s best friend and her elder son’s godmother. In her turn, Carrie-Anne is the godmother of Maria’s son.

The mother of three and exemplary wife, Carrie-Anne shares the secrets of harmony and stress management with all women. Everybody can take an online course and have a consultation; it includes meditation practices and psychological support. Those who subscribe on the official website can get access to the materials for modern women. Students can communicate with Moss via video.

In 2018, the actress continued to work on the series Jessica Jones and organize the Internet courses for women. Carrie-Anne is an active social network user: her Instagram page contains the pictures from family and professional meetings.

At the end of 2017, the celebrity offered women to participate in a funny flash mob: they were to dance every day up to the New Year. It could be dancing in a kitchen while cooking dinner or anywhere else: music could improve one’s condition everywhere. The actress also posted an example of how she practiced that. Fans gladly followed Moss: many housewives started dancing while doing household chores.