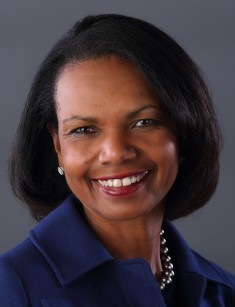 Condoleezza Rice is National Security Advisor, the United States Secretary of State in the administration of President George W. Bush.

Condoleezza Rice was born on November 14, 1954, in Birmingham in the family of a Protestant minister. Her mother was a music teacher.

The girl showed her extraordinary abilities quite early. At the age of five, she read fluently and knew the musical notation. Therefore, the parents enrolled their gifted child in school earlier than it was required.

Condoleezza spent her childhood when the USA was racially segregated, so she faced racial injustice early. According to Condoleezza, she was refused entry into the cultural institutions of her native city, she was served poor-quality food in restaurants, and was not allowed to use the unisex fitting room while buying clothes.

At the age of eight, she experienced a terrible shock because her best friend was killed in the bombing of the primarily black church. Condoleezza distinguished herself with an independent and proud character because her father thought her to reject illegal humiliation. She spent her free time at home, without visiting church services for "colored" people.

In 1967, the family moved to Denver, where her father was offered the position of assistant dean at the local university.

The girl played the piano perfectly, so at first, she dreamed of a career as a concert pianist. In 1969, Rice became a piano student at the University of Denver. However, at the age of 17, she changed her mind when a teacher said that she could never be a good instrumentalist.

During this period, she attended an International Politics course taught by Josef Korbel, father of Madeleine Albright. Subsequently, she called him one of the main mentors in her life. Condoleezza decided to connect her life with politics.

Condoleezza owes a lot to her father and his attitude towards racial problems, which tempered her character. He taught his daughter that black Americans should rely only on individual efforts, moral courage, and power.

In 1981, at the age of 26, Rice received her Ph.D. in political science as a Sovietologist. Her dissertation centered on military policy of the USSR, as well as problems of European security. In the late 1970s, she interned at Moscow State University. She speaks Russian fluently, and also speaks Spanish and French.

Since 1981, Rice has held some senior positions at Stanford University in California, from assistant professor to professor of political science. Over the years of teaching, she earned the reputation as a responsive but strict teacher, and respect from students.

In 1993-2000 she was responsible for managing the university's budget. She managed to eliminate the 20-million budget deficit of the institute within two years.

Condoleezza Rice is the first woman, an African American, as well as the youngest vice-principal throughout the centuries-old history of the university.

During these years the political career of Condoleezza Rice was marred by an unprecedented terrorist attack in New York City on September 11, 2001. Despite prior consultations with the CIA director about the upcoming al-Qaeda attacks, they did not prevent the tragic events.

In 2004, during an investigation, the National Commission obliged Rice to testify, but she refused. She unwittingly submitted to President George W. Bush’s order and answered all the questions of the Commission.

Rice pursued a policy of an active military conflict in Iraq, justifying it by Saddam Hussein's nuclear capabilities and cooperation with al-Qaeda.

US Secretary of State

In 2005, Condoleezza Rice was appointed as the 66th US Secretary of State. 85 senators voted for it, and 13 were against her candidacy. The number of negative votes was the greatest since 1825 because many senators blamed her for the failure of military operations in Iraq.

As Secretary of State, Rice began to advance democratic reform. The most significant initiative to restructure US policy was called "Transformational Diplomacy." Its top-priority goals were:

Her compatriots respectfully nicknamed her “Madam Secretary." The immense popularity can be explained by the admiration of the African-American who managed to reach such heights.

Many Americans liked her detachment and determination, self-control and absolute femininity. The survey of Esquire magazine showed that her popularity surpassed such idols as Angelina Jolie and Julia Roberts.

As for Russia, Rice criticized the slow processes of democratization, the centralization of presidential power and the absence of independent legislative institutions, the gas price manipulation and the stance on the South Ossetian conflict. At the same time, she mentioned the America and Russia fruitful cooperation in anti-terrorism.

She was particularly worried that Russia would block a UN Security resolution on Iran. Sergey Lavrov, who served as foreign minister, assured Rice that they would not hamper it.

Condoleezza Rice is credited with the famous statement “About Siberia.” She allegedly proclaimed that such a vast territory could not belong only to Russia. However, recent studies of political scientists have not found a single reliable source of this information.

Condoleezza made a few mistakes during her public service. For example, journalists found her busy buying new shoes during the deadly Hurricane Katrina which claimed thousands of African American lives in New Orleans.

Vladimir Zhirinovsky, the leader of the Liberal Democratic Party of Russia, criticized the policy of Condoleezza Rice towards Russia and Iraq. He urged her to leave the political career, as well as try her hand at psychoanalysis.

Following the end of her term, Secretary of State Condoleezza Rice returned to Stanford, where she serves as a professor of political science nowadays.

Condoleezza Rice has not left the political arena, continuing to influence the views of Americans today. So, during the presidential campaign of Donald Trump, she called on him to withdraw his candidacy. She wrote it on Facebook during the scandal after the candidate made obscene statements.

Condoleezza Rice has not been married, and she has no children. Her favorite hobbies are music, reading, sports (tennis, jogging, fitness).

Before and after her resignation, she has played music and often performs at concerts along with professional musicians and bands. 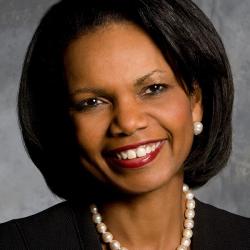