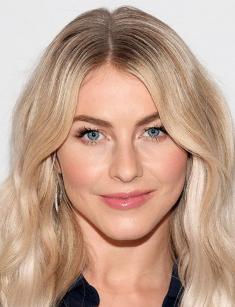 Julianne Hough is an American actress, singer, and dancer. She became widely known for her participation in the TV project Dancing with the Stars, in which she was the winner twice. Her dance performances were awarded a special Primetime Emmy Award for Outstanding Choreography in 2015.

Julianne Hough was born in a small town of Orem, in the northern part of the state of Utah, the U.S. Her father, Bruce Hough, was twice chairman of the Utah Republican Party. Her mother, Marianne, devoted herself to taking care of the household and raising all her five children. Julianne is the youngest.

Her older brother Derek Hough also became a professional dancer and performed on the show Dancing with the Stars. Also, the girl had three sisters: Sharee, Marabeth, and Katherine. Julianne Hough's family was a member of The Church of Jesus Christ of Latter-day Saints, and cherished traditions and rituals of Mormons.

Because Julianne's grandparents from both sides were ballroom dancers, all the children had to go through a dancing school. Little Julianne started attending dancing classes at the Performing Arts Studio in her hometown and soon tried herself in the Latin-American competitive program.

When the girl was ten years old, her parents filed for divorce. Julianne Hough and her brother Derek went to London to continue studying dancing under the eye of the famous coaches, Corky, and Shirley Ballas. In England, the brother and sister became friends with their coaches' son, Mark, and grounded their own musical trio 2B1G, which stands for "two boys and one girl."

The trio performed in a couple of musical television competitions, and during the intermissions at the dance championships. In England, Hough attended the Italia Conti Academy of Theater Arts, in which she first thought about making a career as an actress.

When the girl was fifteen years old, she became the youngest winner of the international Blackpool Dance Festival in two categories, Junior World Latin Champion and International Latin Youth Champion. After this success, Julianne suddenly started to feel empty inside. She felt homesick, and that's why she gave up the career of a professional dancer and moved to Las Vegas, where her mother lived at the time. She studied there for a year at the Las Vegas Academy, and then went back to Utah to her father, and there she graduated from Alta High School.

For the first time, Julianne appeared on television in Show Me the Money project in 2006. And the next year, she was invited to the fourth season of the favorite TV project, Dancing with the Stars. Julianne's partner was the Olympic gold medal-winning speed skater, Apolo Ohno. As a result of the program, the couple took the first place on the show.

Julianne managed to reach the same success the next season when she danced with the Brazilian three-time Indianapolis 500 champion, Hélio Castroneves. In total, the girl took part in five seasons of the television show Dancing with the Stars. In 2009, her partner was the American comedian Adam Carolla, a year later – the musician and actor Cody Linley. After that Hough planned to leave the project, but still took part in season 8, where she performed with the country singer Chuck Wicks.

This was her last performance as a contestant. Later she returned as a guest star and performed at gala concerts, including the time she danced Jive to the legendary song "Great Balls of Fire" with her brother. Since September 2014, Julianne has been an additional 4th judge on the show.

Julianne Hough planned to focus on her music career back in 2007 when she released the single "Will You Dance With Me" in a charity campaign. All the funds from the sale of the album, which became number 100 on the famous Billboard chart, went to the Red Cross Foundation. But then her dancing career could not allow her to devote enough time to the music.

A year later, the aspiring singer signed a contract with the representative of a major music company Universal Music Group in Nashville and under this label released her debut album, Julianne Hough.

The album, which was recorded in the country style, reached the 3rd position in the United States charts. The best song of the album "That Song in My Head" got into the Hot 20 chart at the end of the year and was included in the compilation album, Now That's What I Call Country, which included the best country hits of the last ten years.

At the end of 2008, as it is common with many American musicians, Julianne Hough released an album with Christmas carols, Sounds of the Season: The Julianne Hough Holiday Collection. This work was also warmly received by the audience. It had high sales during the first week, and at the end of the year took 24th place on the Billboard chart.

Apart from this album, the singer recorded the single "My Hallelujah Song," which she recorded in the quartet with her brother Derek Hough, their childhood friend Mark Ballas, as well as the dancer Lacey Schwimmer. In 2014, Derek and Julianne Hough went on tour, performing a live dance concert MOVE.

The song "Is That So Wrong," which was released in 2010 and is currently Julianne's last musical work, was to be the promotional single for the singer's next album, Wildfire. The release of the new album was planned for the end of 2010, then it was postponed and still has not been released, although all the songs have already been recorded and mixed. The sad romantic song "Is That So Wrong," according to the singer, she wrote under the influence of the breakup with her boyfriend, Chuck Wicks.

Julianne Hough tried herself in acting at the age of thirteen when she lived in London. The girl took part in the filming of the first part of the acclaimed fantasy story, Harry Potter and the Philosopher's Stone. In the credits, she appeared as a "Hogwarts schoolgirl."

Her second work in the film industry was a bright musical Burlesque, which was released in 2010. The actress not only played the role of one of the singers of the neo-burlesque club of Georgia, but she also sang in the film. However, her records were not included in the soundtrack of the movie.

Another musical film was the adaptation of the Broadway musical Rock of Ages. Tom Cruise became her partner on the set, and the movie turned out to be light, naive and romantic. In the soundtrack, there are 12 songs performed by Julianne Hough out of the total 20. Julianne Hough also made an excellent performance in the movie Footloose, a musical comedy-drama dance film directed by Craig Brewer. Besides Julianne, the film starred Kenny Wormald, an American dancer, and Miles Teller, who is famous for his role in the movie Whiplash.

But the actress did not only star in musical films. Her filmography includes the romantic drama movie, Safe Haven, a film adaptation of the famous novel by Nicholas Sparks. Here Hough was able to get into the character of a woman named Katie Feldman, who after suffering from the abuse of her husband, runs away from home and tries to start a new life under a different name. The main idea of the film was the following phrase:

"It is essential that you're running toward something, not away from something."

In the summer of 2008, Julianne Hough began dating country singer Chuck Wicks, for whom she stayed for another season in the project "Dancing with the Stars." Their relationship lasted a little over a year. Later Hough dated the TV presenter Ryan John Seacrest for three years, but in March 2013 they broke up.

Since February 2014, Julianne had been dating the hockey star Brooks Laich, whom she had met a few months before. Brooks Laich plays for National Hockey League (NHL) as a team member of Washington Capitals. In the summer of 2015, the couple announced their engagement, and two years later Julianne Hough's wedding with her fiancee took place.

Julianne Hough got married in a stunning white hot wedding dress which, combined with her short hair of blond color made a resounding success on her Instagram account, where she posted her wedding photos.

Julianne Hough, being 5 feet 24 inches tall, is considered to be sexy and hot by her fans who want to know every detail of the life of their favorite star, including her engagement and wedding ring, the information about the newlyweds' honeymoon and even Julianne's everyday hairstyles, diet and workout routine.

The only things that Julianne Hough does not share with her fans on Instagram and Twitter are her topless or naked pictures, or photos in a bikini, and finds it frustrating that people are even interested in that, instead of her actual performance.

Now, at the age of 30, Julianne Hough has a net worth of $10 million. In 2014, Julianne Hough became a center of a media scandal, having done a blackface a part of her Orange Is the New Black Halloween costume. The performer was accused of being racist.