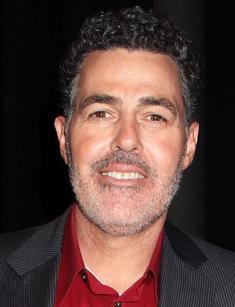 Adam Carolla is a famous comic and radio broadcaster from the United States. In his career, he has contributed to various radio and TV programs and shows, and launched his own ones. Moreover, he is a good writer sharing his ideas about life with readers. But how does Carolla manage to find enough time for starring in movies, hosting TV shows and writing books? Read below his secrets!

As a kid, Carolla had to get through his parents' divorce. As a result, he remained with his dad and saw his mom rarely. In his future admissions, he shared it influenced him hugely: he reportedly began turning into a closed person, but later managed to cope with this break-up and took it for granted.

From the very infancy, Carolla had a good sense of humor. His classmates, pals and relatives called him ‘the life of the party’ cause the boy always had jokes and funny stories to tell.

Having finished studying at school, he couldn't get his diploma for a long period of time cause he had a library fine.

Young Carolla was keen on football.

Adam went to study at a college but left it – he had to earn a living and dedicated his time to working.

Adam Carolla had to take up several jobs, including being a sports trainer. So, he was a personal coach of Jimmy Kimmel for a fight broadcasted by KROQ-FM's show Kevin and Bean. It led him to a long-time friend relationship with Kimmel. Their alliance later turned to business relations. While training Kimmel, Carolla got acquainted with directors of Kevin and Bean, met Mark Itkin. So, Adam started co-hosting the radio program Loveline alongside Dennis Prager.

As for the show's style, it was majorly call-in – it means listeners could ask the hosts about such tremulous issues as intimacy and love. Although, Carolla often spent much time of the program musing upon different issues himself.

2005 brought Carolla a deal with this radio program broadcasted in morning. The show first premiered on radio in 2006 and happened to be a real hit. Carolla invited various celebrities for an interview – once he interviewed DJ Khaled. The episode was of a high success and is available to listen on YouTube.

At the beginning of 2009, Adam published the podcast on his Internet site. Its downloads' level was the highest on iTunes.

Because of his projects, Carolla has even had legal problems. So, he was accused of the content infringed on Personal Audio's patent. He referred to a crowdfunding site to raise money to defend himself against the accusations. Eventually, Personal Audio canceled the lawsuit, and both the sides denied from communicating with the media. The scandal has remained a subject of people’s heated debate for a couple of months.

Also, Adam has dedicated himself to working on television. Although he has tried himself out on many shows, he never worked with any project for a long time. Mostly, he starred on shows alongside his pal Jimmy Kimmel. So, his television debut was with The Man Show. Later he wrote scenarios for Jimmy Kimmel Live! and starred in its several episodes.

Adam Carolla and Daniel Kellison launched together with the TV show entitled Crank Yankers. Around that time, he also was seen competing in Dancing with the Stars – he was paired with Julianne Hough. Besides, Carolla is known for starring in such shows as The Car Show, Catch a Contractor and Adam Carolla and Friends Build Stuff Live.

In 2005 fans could see Carolla hosting the talk show Too Late with Adam Carolla. The same year, he contributed to the program The Adam Carolla Project – he was shown renovating the house where he lived at an early age. The program consisted of 13 episodes. Subsequently, this new home was sold for more than $1 million.

In 2011 the celebrity launched a new project - The Car Show. It was shown on Speed TV. Fans and professional critics expressed mostly positive reviews.

Additionally, Carolla worked as a host of Catch a Contractor – the program which was first shown on screens in March 2014 and canceled one year later.

Adam Carolla has also given his voice to characters of different animated movies. He has also co-starred with Ben Kingsley in one picture.

His net worth is evaluated at $16 million. Being rich, he has a collection of luxurious cars.

As for Carolla's relationship, he has a wife – Lynette Paradise – their marriage ceremony was held on September 28, 2002. The spouses have two kids – twins Santino and Natalia. Interestingly, they were born on June 6, 2006. However, all the documents have the date 07-06-06 – because the spouses decided to avoid the devil 666.

The celebrity is left-handed.

As for Carolla's political views, he supports the Republican party.

In his career, the celebrity has provoked several controversies. So, once he offended people living in Hawaii calling them dumb.

Besides, Carolla called a sportsman Manny Pacquiao "a fucking idiot." He was criticized by people around and had to apologize in a Twitter post.

Apart from show business, Carolla demonstrated his excellence in writing. So, he is an author of the book entitled A Survival Guide to Life and Love. The secret of a happy life has always been a very important question for people of all generations. Tiredness, frustration, poverty and other things are able to destroy people’s motivation to move forward, to develop and build a life of their dreams. It inspired Carolla for writing this project - readers can find there useful advices about leading a happy life.