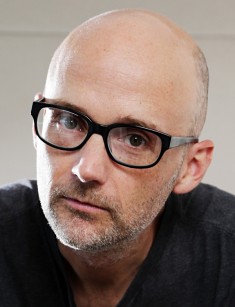 The name of the American DJ Moby is known to almost all people in the world. This talented person is known for his cult singles, such as "Porcelain," "Why Does My Heart Feel So Bad?", "Extreme Ways" and "A$AP Forever." Moreover, he has become the composer of music for the studio album of Mylène Farmer and composed the soundtracks to the cult movie works.

Richard Melville Hall (this is the real musician’s name) was born in the USA, in the town of New York. Though, Moby spent his childhood and youth in Darien situated in the State of Connecticut.

It's noteworthy that Moby's parents aren’t creative people. His mother is a physician by her specialty, and his father James was a professor of Chemistry. We can't exclude such a version that the American writer Herman Melville who delighted the regular visitors of the bookstores with his novel "Moby-Dick" was the eminent ancestor of Moby. Actually, that’s why the musician decided to take such a pseudonym.

When Richard turned two years old, his father died in the road accident that's why the boy didn't experience what fatherly care and love was. The future composer and singer of the popular songs were brought up by his mother who was a rather progressive and modern woman. After the death of her husband the widow relocated together with her son to Danbury: his single-parent family settled in the house which was situated not far from the city prison.

Elizabeth hasn't managed to settle in Danbury; moreover, she didn't want her son to have the view on high walls of the prison from their windows. That's why in two years after the relocation the woman together with Moby set off to Darien and lodged in the big house of her parents. Here Moby began to attend school.

From Richard's biography, it's known that he was lucky to have such a good mother, as she was a progressive and modern woman and she encouraged all creative attempts and ideas of her son. Elizabeth tried to impart Moby fancy for music – the boy learned to play the guitar and the piano with great pleasure. By the way, Moby’s hobby for string instrument has played an important role in Moby's life, as he has made up his mind about his goals and began to be a member of different punk bands. The young man was a member of such bands as Vatican Commandos, Ultra Vivid Scene, etc.

Richard didn't have doubts that he would dedicate his life to the music forever. In the eighties, the young man returned to his native town, to the city of opportunities - New York. There Melville started to comprehend the basic elements of the musical genres: the guy began to keep away from the heavy sounding of punk genre and started to discover the electronic music created by Chicago DJs.

Moby was so engaged in the "house" music that in the late eighties the musician started to perform at nightclubs and please the dancing crowd with his new compositions. It’s worth noting that his manager Eric Herl became the witness of his first solo performance and he noted:

"The music was fascinating, but the show was full of technical failures. This intrigued me greatly and impressed me in a strange way".

In 1990-1991 Moby released his debut singles in collaboration with Instinct label. It's worth noting that the single under the title "Go" which came out in 1991 and achieved the peaks of the British music charts. Perhaps, the samples from the detective series Twin Peaks which was popular at that time contributed to this. The series tells about the mysterious murder of the schoolgirl of senior classes Laura Palmer.

It goes without saying that in such a way Moby has declared himself. That’s why in the future the cooperation with famous performers and music bands was waiting for him. Among his cooperations, he worked with Michael Jackson, Pet Shop Boys, Brian Eno, Depeche Mode, Erasure, The B-52s and Orbital.

The first songs collection composed by Richard Melville appeared on the music market in 1992, and his single "I Feel It/Thousand" which was released in a year at once was included to Guinness Book of Records. That’s why the contact with the well-known Mute Records label wasn't an unexpected but rather fundamental event.

In 1995 Moby delighted the admirers of his music with the album under the title "Everything Is Wrong" in which he presented himself as the original performer of these compositions: Richard realized experiments, mixing different genres in one. It seemed that the DJ was trying to combine controversial things – for example, pop music, rock, and punk. Moreover, on this disk, the melomaniacs could listen to the sounding of pseudo-industrial trash, ambient trance, a break-beat, and other music genres. It’s not surprising that the popular Spin magazine awarded the album "Everything Is Wrong" as the Album of the Year.

Moby released his next album in 1996, and gave it the unusual title - "Animal Rights." That time his fans enjoyed the musical triptych which consisted of the mix of the speedcore, punk and instrumental music. Besides, Moby added to some compositions his singing and his favorite guitar sounds. Even though, by the words of Melville, this album became the peak of his creative career, the sales showed completely different results. The album hasn’t gained popularity at singer’s admirers.

Because of this situation, the musician began to suffer from depression which could nearly lead to a creative crisis. Moreover, Moby's life was marred by one more tragic event: his mother died because of lung cancer.

Nevertheless, Moby hasn’t given up and continued to work hard: in 1997 Richard took himself the creative pseudonym of Voodoo Child, and he released his third album "The End Of Everything" and also a collection of remixes and soundtracks to the pictures "I Like To Score." Fortunately, the third disc was sold out, and due to this fact, the composer continued to work with renewed vigor.

In 1999 the singer and musician gained fame: his album under the title "Play" became almost the leader of sales. The disk combines various genres - blues, gospel, techno, and others. The music critics consider the album "Play" the first album which received public recognition. By the way, in this album, Moby also shared his philosophy of life with his admirers. Inside the disk, there is a welcome brochure in which there are printed Melville's essays in which he shares his views on life, vegetarianism, humanism, etc.

In general, Moby has 15 albums in his filmography which are versatile. Moby continues to delight his public with the experiments in music, for example in the album "Last Night" which came out in 2008, one can hear the sounding of the nineties.

In 2009 there was released the plate under the title "Wait for Me," and the song video on the composition "Shot in the Back of the Head" was shot by David Lynch who presented the cult series Twin Peaks to the movie lovers. Also in his assets, Richard h the following albums - "Innocents" (2013), "These Systems Are Failing" (2016), "More Fast Songs About the Apocalypse" (2017) and others.

Moby is a versatile person that's why his listeners appreciate it. Except for composing the songs, the man also takes part in the cinematic works, for example, you can see him in cameo roles in the pictures Joe's Apartment (1996), 30 Rock (2009), The Mindy Project (2012), etc.

What about the personal life of Richard there is information that he is a vegetarian: the singer refused to eat animal products in 1980-s. Moreover, Moby is a philanthropist and a Christian, though the musician doesn’t belong to any of the religious confessions. What about the policy, the singer supports the democratic party. In 2012 Moby gave his vote for Barack Obama .

Besides, Richard likes reading books, and while traveling, he takes with himself some science- fiction books. The novel Idiot written by Dostoyevsky was his favorite book when Moby studied at school.

From Melville’s private life it’s known that he has never been married and doesn't have children, and he keeps his flings in secret from his admirers. However, some information has leaked in the mass media that for some time Moby had relations with Natalie Portman. Though, the couple broke up because of the jealousy. The girl admitted that they stayed friends.

Moby has settled in Los Angeles and is engaged in his restaurant TeaNY. In 2018 there came out the new album of the musician under the title "Everything Was Beautiful, and Nothing Hur".

The musician continues to release new song videos and give concerts in huge cities and also delights his fan with the photos on Instagram. 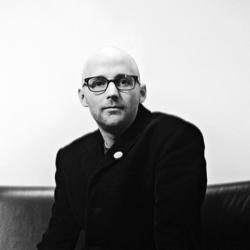