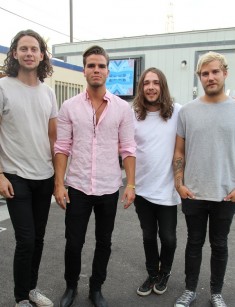 Just for a couple of years, four musicians from Iceland have conquered the whole generation of the admirers of folk music, light blues, and aggressive rock motives. Their songs have become soundtracks to blockbusters, and their leading hits have become a cult for the young generation. All this is about the band Kaleo.

The background of the music band originates in the school times of three teenagers: Jökull Júlíusson, David Antonsson, and Daniel Kristjansson. The best friends coming from Mosfellsbær (the town not far from Reykjavík) founded their music band, they performed in this structure in Iceland till 2012.

In 2012 the guitarist and singer Ruben Pollock joined the perspective band. Four singers had their debut together during the annual festival in Reykjavík which was extremely successful. Since that time the band gave concerts in Iceland and was gaining popularity. The title of the music band Kaleo is translated as "sound" from the Hawaiian language.

In one of the interviews, the participants confessed that there wasn’t any story connected with the name of the band. They just found this sonorous word interesting and memorable.

The frontman of the band is Jökull Júlíusson (Yokul Yuliusson). His pseudonym is JJ Julius Son, and he was born in 1990. Julius is a singer, guitarist, he composes music and writes texts. There is no exact transcription of this unusual Icelandic name. With such a transcription the accuracy of pronunciation is lost. By the way, Yuliusson is not his surname, and in the Russian language, it's a middle name (literally "Yulius's son).

Jökull knows a couple of foreign languages, among which: English, Icelandic, Danish. He speaks Spanish a little as he often spent his vacations in the southern part of Spain together with his parents. Moreover, the singer’s father taught Spanish.

Davið Antonsson. Is a drummer and also a vocalist in the music band. Daniel Kristjanson is a bass guitarist.

Rubin Pollock has become a member of the music band later than others. Before he began his music career, the vocalist and guitarist had been working in the kinder garden and was fond of chess.

Unfortunately for their numerous admirers, there are no details about the personal lives of the Icelandic celebrities as well as about their complete biographies though there is an official Instagram account of Kaleo band containing information on their concerts, photo reports, and video. You can find similar information on their official website (in Russia – in their fan community). Moreover, the members of Kaleo band have personal pages on the social networks where you can see the pictures from their personal archive.

The song in the native language under the title Vor í Vaglaskógi has brought popularity to Kaleo band. It’s noteworthy that earlier these compositions already sounded on the local radio stations and the group was popular in Iceland. Though exactly this song which returns us to our roots is original and melodious, has brought broad recognition to the band.

This song was included to the Top 10 composition on the radio Ràs 2 and sounded in series Trapped. The story of the song Vor í Vaglaskógi begin in the sixties. The words of the lyrics became the basis of the song. Jökull proposed his own version of the song and the Icelanders met it positively.

Already in 2013, the band released the album which was symbolically entitled as Kaleo. The album consists of eight compositions in the genres of folk-rock and neo-folk. The same year there was released a mini-album Glass House or EP (Extended Play) which includes not more than four tracks.

In 2014 the song "All the Pretty Girls" conquered the hearts of 18 million users. Such quantity of listening was achieved on the Spotify musical website after some time.

In 2015 the American Atlantic Records label which is the greatest American organization which specializes in the sound recording got interested in the band. Among the stars who work (now or earlier) with "The Atlantic sound recording corporation" there are the following - Meg Myers, Bruno Mars, Phil Collins, Ruth Brown, Cher, Ray Charles, Aretha Franklin.

After the contract was concluded, Kaleo settled in Austin (the capital of Texas). The Icelandic band considered their relocation a breakthrough. The reason why the guys chose Austin, Jökull said that it was an ideal place for creative people and the abundance of the musical genres was concentrated here: rock, blues, country music. This town is a perfect place for melomaniacs and aspiring musicians. Moreover, in Austin, there is located the office of the label with which the band cooperates.

The members of the group had to take a lot of efforts at the beginning of the career. The USA has met the musicians from Iceland with cordial welcome and already next year after the beginning of the collaboration with Atlantic Records was saturated with the concerts. Kaleo went on an open USA tour.

For the first time, the group took part in the largest annual festival from South by Southwest in Austin in 2015. This event includes not only the music sphere. At this festival, they also organize conferences for the representatives of cinematography and experts in the sphere of new technologies.

At the same time, the band began to work on the album A\B together with the producer Jacquire King. The soloist explains his unusual idea with the fact that he can’t work in a definite genre. A\B symbolizes that the band is unique and the members don't limit their creative career with the boundaries of the genre. The A-side presents compositions in blues and rock'n'roll style ("No Good," "Way Down We Go"), the side B contains melodious ballads ("All the Pretty Girls").

The song "Way Down We Go" which came out in 2015 became the peak of band’s popularity. This composition entered the charts and achieved the leading positions. The blues composition can be heard in the sensational Logan (2017), in the series Suits, Teen Wolf, Grey’s Anatomy, The Vampire Diaries. In Russia, this song was used as one of the soundtracks in Ukrainian-Russian comedy series Hotel Eleon.

There are no clear boundaries in the creative career of Kaleo that's why during the short time the band gained the interest of millions of fans. The musicians from Iceland have become a cult of the present times. In 2016 the band performed at the concert which took place in the crater of the sleeping volcano Thrihnukagigur (the video of the well-known composition "Way Down We Go" was shot in the same place). The video was shot during 22 hours, in harsh weather. The concert was held in the same conditions and without the phonogram, just real sound in fascinating acoustics of the severe crater.

The inhabitants and visitors of Iceland could visit the event only reaching this place on foot walking on the stiffened lava. Or they could use the services of the transport, by the helicopter. It was an expensive affair but both the musicians and critics were admired. By the way, the crater is sleeping for more than four thousand years, but the tourists are allowed to go here only since 2011. By the words of the participants, it’ probably not the last crazy location for the shootings and concerts.

The soloist of the band Jökull Júlíusson confesses that he never knows for sure in which genre he would compose the new song. Whether it’s rock, blues or folk – the audience has to feel the musician's state of mind at the present moment. – this is what Júlíusson says.

In 2017 Kaleo band visited forty states. By the version of the employees of Rolling Stone magazine, it is worth to follow the creative career of these musicians.

At present Kaleo is preparing for the grandiose concert in St. Petersburg which is set for the 29th of July, 2018. The admirers of Icelandic musicians are looking forward to seeing their favorite band. Moreover, the Icelandic quartet will visit Kiev UPark in the summer of 2018. 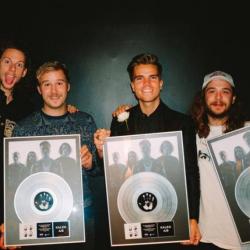