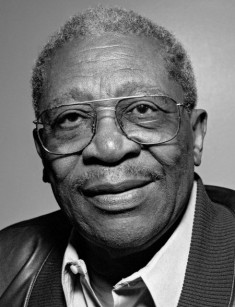 B. B. King: biography

B.B. King was the true King of Blues; this man became a legend in his lifetime. Few bluesmen who followed him did not take the example of his unique playing and fantastic sense of music. B.B. King was giving hundreds of concerts each year and stopped performing not long before his death. His heritage is the classics of blues.

Riley King also known as B.B. King was born on September 16, 1925, in Itta Bena, Mississippi. The boy spent the majority of his childhood at a cotton plantation where his mother and grandmother lived. According to King, before he discovered his music talent, he earned 35 cents per 45 kg. of cotton.

The young man was fond of blues; gospels in the local Baptist church were the first songs he performed. The mother and the grandmother were religious persons who did not allow Riley to miss a single church service. Besides, King’s distant relative and the local priest, Archie Fair, contributed to his talent development.

In 1943, the future musician moved to Indianola, Mississippi, and got hired as a tractor driver. The young man combined his major work and music. As it turned out, playing in a band was much more profitable. One night, in May 1946, King finished his work, and his tractor broke. Riley decided to flee from the employer’s rage and left for Memphis where his pretty famous cousin Bukka White lived; King had only $2.5.

The cousin became Riley’s mentor for the next ten months and taught him the basics of blues. Soon, King realized he could not build his career under his cousin’s protection. In 1947, he came back to Mississippi and earned so much money throughout a season that he paid all his debts.

Further on, the bluesman went to West Memphis where he performed on KWEM Radio at the program of Sonny Boy Williamson II. It was the breakthrough moment in the musician’s career: he was noticed and invited to WIDA radio channel as a DJ and a singer. This is where he got his nickname: initially, he was called “Beale Street Blues Boy,” but it was shortened to “Blues Boy” and, eventually, “BB.”

In 1949, the singer recorded the debuting single “Miss Martha King.” Although critics did not appreciate it, Modern Records paid attention to King, and its branch company, RPM, signed a contract with the musician. Soon, six singles came out. B.B. King did not gain popularity in America, but he was locally successful.

At the end of 1951, the musician presented the seventh single "Three O'Clock Blues”; Billboard included it in its list. Soon, the song topped it. Thus, B.B. King earned the national fame and signed contracts on concerts in the largest halls of the country where black musicians could play. 18 months after the first show, the artist went to his first tour.

Thanks to his numerous hits, radio work, and long tours, the man was one of the most significant musicians in his genre in the 1950s.

In the early 1960s, the interest to blues declined: the epoch was marked by the origin of rock’n’roll. Many black musicians turned into stars: Chuck Berry, James Brown, and Fats Domino. In comparison, B.B. King’s music was race-related and awoke little interest among the white audience. As a result, in 1986, the singer’s two concerts in front of the white failed.

With all that, the 1960s works are the most powerful in his career: for example, the classic song “Sweet Sixteen.”

In the mid-1960s, blues regained its popularity. King presented another hit, “The Thrill Is Gone” and returned to concerts in jazz clubs and large halls. In 1969, he appeared on television at Tonight Show. In 1971, the bluesman was invited to the popular show of Ed Sullivan.

On June 29, 1973, the singer had another great achievement: he participated in the New York Philharmonic concert; many masters of blues gathered there.

The song “The Thrill Is Gone” brought the man much fame outside the genre: it was popular in pop music charts which is still a rare phenomenon. The musician’s works seemed to be loved by everyone: in 1951-1985, his songs appeared in Billboard chart 74 times.

At the end of the 20th century, the King of Blues rarely presented new works: he was busy touring and gave approximately 300 – and sometimes even more – concerts per year. He was also catching up with the modern times: in 1988, he collaborated with U2 and presented the hit “When Love Comes to Town.” In 2000, together with Eric Clapton, he had the album Riding With The King released.

In 2004, Riley received the Polar Music Prize for his accomplishments in creating and popularization of music. Two years later, King announced he was going to his “goodbye” tour which, however, did not influence his artistic activities and new works. The guitar player from the Northern Ireland Gary Moore accompanied B.B. King in that tour; the musicians had collaborated before that.

On February 21, 2012, the concert "In Performance at the White House: Red, White and Blues” took place; the bluesman participated there among other stars. Barack Obama himself sang a part of the song “Sweet Home Chicago.” After that show, B.B. King continued to give concerts until his condition deteriorated after another live performance in Chicago on October 3, 2014. For this reason, the remaining eight concerts had to be canceled.

Riley King was married twice, and both marriages ceased to exist because of the musician’s busy schedule. Martha Lee Denton was the man’s first wife; later, he married Sue Carol Hall. The women could not stand the life with the man who belonged to music and stage in the first place.

King’s wives never got pregnant. However, rumors had it the musician had 15 children. Although the medical analysis demonstrated the low level of spermatozoa mobility, the King of the Blues did not dispute his fatherhood and supported all his children financially.

Although the man was married twice and, perhaps, had many lovers, there was only one significant woman in his life. Her name was Lucille – and she was a guitar.

Lucille appeared in the bluesman’s life in the 1950s when a fire took place in a hall during a fight. B.B. King left the building, just like others, but he remembered that a guitar was left there. He risked his life and came back for it. Later, the musician discovered that some Lucille caused the fight and gave the instrument this name. It was a warning that kept the man from crazy behavior like a brawl for a woman.

By the way, some fans of the popular comics and series The Walking Dead believe that Negan’s baseball bat was named Lucille after the guitar of the King of the Blues.

Among other bluesmen, the artist singled out Frank Sinatra: King appreciated his musical talent and respected the persistence that helped him promote black musicians.

In addition to music, the singer had many other interests: he was a licensed pilot and supported movements aimed at diabetes research.

The musician’s health condition interrupted 2014 tour: the complications of his arterial hypertension and diabetes manifested themselves. In the end, the disease proved to be stronger. On May 14, 89-year-old B.B. King passed away. His daughters claimed their father had been poisoned, but autopsy results rejected that theory.

On May 27, 2015, the body of the King of the Blues was delivered to Memphis where the funeral procession including a brass band was waiting for him. Thousands of people stood on each side of the road and paid the singer the last respects.

After the civil ceremony, the musician’s funeral took place at the Bell Grove Missionary Baptist Church in Indianola. The man was buried at the B.B. King Museum which had opened in 2008 when the artist was alive. 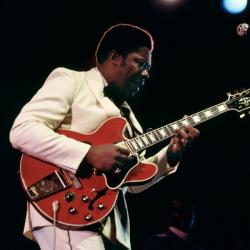