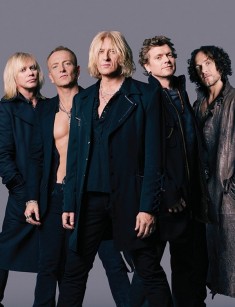 Def Leppard is an English rock group that formed in 1977, at the peak of the British heavy metal development. The band earned the love of the audience in the early 1980s and presented dozens of albums and collections. Today, Def Leppard is one of the bestselling projects in the world; it is included in the 100 Greatest Artists of All Time.

The new soloist suggested the group’s name should be changed to Def Leppard and drew a logo of the renamed project. Everyone accepted the idea, and the quartet began to rehearse. They gathered in a small room at a local factory. Later on, a new guitar player, Steve Clark, joined the group. He organized the band’s first public performance at Westfield School.

In 1978, Tony Kenning left for a new project. It happened when the group was recording the debuting three-song album. Thus, Frank Noon played Kenning’s parts. Soon, a new young talent replaced him: Rick Allen. At the end of 1984, he had a car accident and lost his left arm. The group members supported Rick when he was recovering and helped design a special drum set where the primary load pertained to feet.

In 1982, another change in the group happened: Pete Willis who had become an alcohol abuser was dismissed from the project, and the guitar player from Girl, Phil Collen, took his place.

Steve Clark’s life also ended sadly. In the early 1990s, he underwent a rehabilitation course to get rid of alcohol and drug dependence. When the musicians were working on the fifth studio album, they suspended him for six months from recording. In 1991, Clark died of an overdose in his own house in London. The group did not look for a new guitarist; the four musicians continued to perform.

However, the trademark sounding of Def Leppard required powerful, bright guitar riffing. The musicians organized a casting for the position of deceased Clark. After the auditions, they chose Vivian Campbell, the ex-member of Dio and Whitesnake.

Mutt Lange, the producer of the Australian group AC/DC, also contributed to the history of Def Leppard development: he formed the band’s music preferences and helped record some albums.

The debuting album Def Leppard EP was released in 1979 by Bludgeon Riffola Records. The sales turned out to be good when one of the BBC radio channels specializing on punk-rock and new wave music broadcast “Getcha Rocks Off.” British hard-rock and heavy-metal fans liked the group. Soon, a large English company, Virgin EMI Records, signed the contract with Def Leppard.

On March 14, 1980, the studio presented the first full-fledged album, On Through the Night. Although it was included in top 15 in British music charts, the audience showed little fascination: the songs were intended for the US. The conflict with fans took place in summer 1980 at an open festival: people were throwing beer cans and bottles with urine at the musicians and accused them of “selling” themselves to the Americans.

Def Leppard overcame the insult and continued to give concerts. Soon, they attracted the attention of Mutt Lange, the American producer who promoted AC/DC. Under his guidance, the group created the second studio album High’n’Dry that came out in summer 1981. Lange’s professionalism helped the musicians find their own style and make their sounding original.

The album was not successful commercially, but the music video “Bringin' On the Heartbreak” was popular thanks to MTV streaming. After the album release, the tour in Europe and the United States followed; the musicians took part in Ozzy Osbourne’s and Blackfoot’s shows.

As long as the group came back, they started to work on the new album, Pyromania, famous for the single “Photograph.” The sales were fantastic, and the music video for the main song was one of the most popular videos on MTV. The video “Too Late for Love” created after a party with Elton John and Meat Loaf was popular as well.

In 1987, Def Leppard presented the album Hysteria; they had been working on it for four years. It was Rick Allen who created the title and reflected his own emotions after a car crash as well as the group members’ feelings: they had to face the artistic uncertainty and, at the same time, record of the new album.

The triumph of Hysteria began with the single “Animal”; it was the first song of Def Leppard that reached the top ten in British music charts. The album itself became the leader and remained on the top positions for 105 weeks. The songs “Pour Some Sugar on Me” and “Love Bites” conquered the Americans and got to the top of Billboard Hot 100. The music videos on these songs were also number one on popular music channels.

All in all, the commercial success of Hysteria was beyond everybody’s expectations; more than 20 million copies were sold worldwide. Def Leppard was at the peak of the popularity. In 1988, the band was nominated for the Brit Award for Best British Group; the group’s song was also included in the 100 Best Songs of the 1980s.

Def Leppard did not waste time and began to work on the next studio album, Adrenalize; it was released on March 31, 1992, and strengthened the band’s top positions in British and American music charts. The first single “Let's Get Rocked” proved to be the greatest hit; the musicians performed it at the MTV ceremony. The same year, they participated in the concert in memory of Freddie Mercury at Wembley Stadium and sang Queen’s “Now I’m Here” under Brian May’s accompaniment.

At the beginning of 1992, the new tendencies of rock music encouraged Def Leppard to give up their rebellious style and add pop accents to their songs. In1993, the group presented Retro Active, the collection of previously unknown works they had created before. Two years later, some of those tracks were included in Def Leppard Greatest Hits (1980-1995) that reached the third position in Great Britain; five million copies were sold in the USA. At the same time, the alternative track lists were created and distributed in North America and Japan. In fall 1995, Def Leppard got into the Guinness World Records: they played three shows in three continents during a day.

In comparison with the preceding successful works, the 1996 album Slang looked modest, yet it was noticed. The music was vivid: the group experimented with the sounding and recorded each song together while the music parties in previous compositions were mixed. Besides, the lyric songs that dominated in Slang were untypical for Def Leppard. As a result, fewer people visited the concerts, and the sales decreased.

The musicians needed an impulse, and they got it: the video project Behind the Music. This documentary brought Def Leppard back to the center of the audience’s interest thanks to numerous replays and parodies at Saturday Night Live. As the group felt stronger and more confident, the traditional-Def-Leppard-style album was released. Euphoria won gold certificates in the US and Canada, and the first single, “Promises,” topped American rock charts and remained the leader for three weeks.

Following the new wave of the public interest in Def Leppard, VH1 channel presented the biopic Hysteria – The Def Leppard Story; it was often re-released on DVD. In 2002, the group created the album X full of pop-rock songs. The new work became a failure in British and American charts, but the international tour supporting the album was marked with many thousands of fans and 151 concerts.

Songs from the Sparkle Lounge became the tenth studio album in Def Leppard’s discography; the official release took place on April 25, 2008. Later on, the band had a large tour in Europe and America and had the chance to collaborate with Whitesnake, ZZ Top, Taylor Swift, and others.

In October 2009, the musicians suddenly interrupted the tour for personal reasons; rumors had it the band was going to break up.

To reject the speculations, Def Leppard presented several live albums and gave the rest of the concerts. The long tours deteriorated Elliott’s health; he was not young anymore. During a show at a cruise ship, he lost his voice and had to stop singing for a month according to doctors’ recommendations. As the man recovered, he initiated the recording of the album celebrating the group’s 30th anniversary.

At the beginning of 2018, Def Leppard appeared in A Life on The Road, the documentary of their old friend and colleague Brian Johnson. In this project, rock stars gave informal interviews to the leader of AC/DC and discussed music as well as other subjects.

On October 12, 2018, the group announced the new album The Story So Far-the Best Of was going to be released in a month and a half. In addition to 34 best tracks, the remix of Depeche Mode’s “Personal Jesus,” the new version of “Rock On,” and the new song “We All Need Christmas” were included.

Nowadays, Def Leppard is preparing for the 2019 European tour; the first show will take place in Sweden on January 6th. The musicians announce their upcoming concerts on the official Instagram. The main page includes the photos from previous concerts and some personal pictures. The band is also planning to work on the new material between gigs, but the date of the next album release remains unknown. 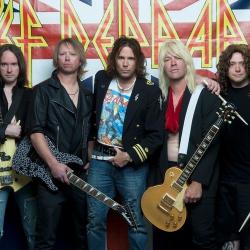