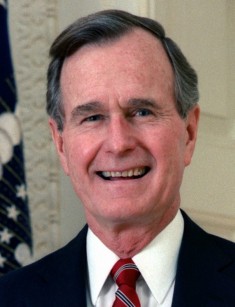 George Bush Sr. was one of the most significant politicians in the United States. He was the 41st President of the country, an outstanding congressman, speaker, and diplomat; besides, he was the father of the 43rd American president George Bush Jr. During his presidency, Bush Sr. made several essential decisions and strengthened the positions of his country in the world. In 2017, the politician became the longest-living person among the former US Presidents.

George Bush was born on June 12, 1924, in Milton, Massachusetts. His father was a board member in large companies, owned his own bank business, and even represented Connecticut in the United States Senate for ten years.

The father was wealthy, and the young man had the opportunity to receive a wonderful education. He graduated from Phillips Academy, the most prestigious boarding school in Massachusetts. In 1942, George joined the United States Navy. In the army, the future president received a pilot training and became the youngest naval aviator at that time: he was 18. In 1945, the young man resigned from the army with honors.

As he left the military service, George Bush continued his education at Yale University. Instead of four years that the whole course normally lasted, Bush spent two years and a half to complete his studies. At that period, George was a president in one of the fraternities and lead the university basketball team.

In 1948, Bush graduated from the university and became a certified economist. After Yale, the man moved to Texas and began to study how the gas business worked. Thanks to his father’s connections, George Bush got hired in a large company as a sales manager. In a while, he gained advanced business skills and opened his own gas company. The business proved to be successful: soon, Bush became one of the American millionaires.

The ambitious man felt that his business success was not enough. He was always interested in politics; in 1964, he ran for a position in the country’s Senate. However, he failed to gain the necessary number of votes from Texas.

Under those circumstances, Bush Sr. decided to leave the business and devote his life to politics. His endeavor brought good results. In 1966, he got the long-awaited position of the Member of the U.S. House of Representatives; two years later, he was re-elected. In 1970, Bush made another attempt to enter the US Senate and failed again.

The same year, George Bush was appointed the United States Ambassador to the United Nations; three years later, he became a Chairman of the Republican National Committee. Simultaneously, the politician was polishing his diplomatic skills as the head of the American embassy; he organized Henry Kissinger’s and Gerald Ford’s visits to China. Besides, in 1976-1977, George Bush worked as the Director of Central Intelligence.

In 1980, George Bush Sr. tried to run for the presidency for the first time; however, he gave in to Ronald Reagan in the primary election. The struggle for the post was pretty harsh; Bush managed to win the trust of a significant part of voters thanks to his interviews and political debates, yet the conservative Reagan defeated his opponents. Despite this failure, George settled in politics: Reagan chose him as the vice president who actually worked as the president’s primary assistant.

As the vice president, straightforward and goal-oriented George Bush worked on state programs related to drugs, reduced the influence of the state on the private sector, and even officially performed the duties of the US President for eight hours when Ronald Reagan had bowel surgery.

This was not without challenges. In 1986, several illegal arms trade operations were revealed. Some bureaucrats from the White House were involved: they sent the arms to Iran and used the money they got for it to support the opposition group in Nicaragua. However, Bush and Reagan claimed they did not know about those schemes.

In 1988, a new pre-electoral campaign was launched. George Bush tried to become a president again. His preparation improved; one of his speeches intended for the Republicans went down in history as “Thousand Points of Light.” The politician emphasized the main ideas that he was going to implement: he marked he did not accept abortions, claimed he would preserve death penalty and the right to keep and bear arms, and promised to avoid new taxes.

At that time, people welcomed Bush’s ideas. On November 8, 1988, the politician was elected the new USA President for the next four years.

The improved relations with the Soviet Union became one of Bush’s most significant achievements; the American leader held several meetings with Mikhail Gorbachev. Following their results, the politicians signed the official agreement that limited the arms race between two countries. In 1992, George Bush Sr. and Boris Yeltsin made even more progress and signed the Strategic Arms Reductions Treaty which meant that America and Russia stopped the cold war.

The accomplishments in domestic politics were also notable. The politician focused on the budget deficit reduction that had become threatening when Bush Sr. became the president.

In 1992, Bush Sr. announced he was going to run for the presidency again; however, he did not keep the position, and the representative of the Democratic Party, Bill Clinton, won the victory. Although George Bush left politics, he continued to be engaged in social activities: he helped oncology organizations and headed assistance funds that worked with victims of tsunamis, hurricanes, and earthquakes.

George Bush’s personal life was happy. As soon as the handsome, tall man (George’s height was 188 cm.), he met the love of his life, Barbara Pierce.

In 2017, George Bush Sr. became the longest-living person among American Presidents. Despite his senior age and declining health, Bush celebrated his birthday with a parachute jump – the former politician began to do that at 75. 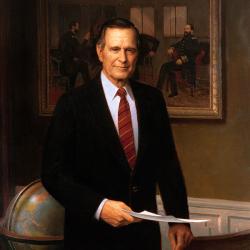