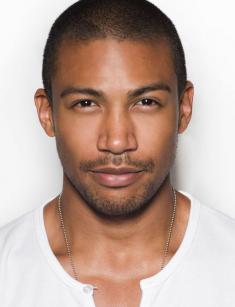 Charles Michael Davis is an American actor of African-American and Filipino descent. The actor became well-known for the vampire series The Originals. Besides, Davis has had a guest appearance in the projects, Grey's Anatomy and The Game, and been the face of sports brands. The young man with a bright and memorable appearance has done commercials for FootLocker and Nike brands.

Charles Michael Davis was born on December 1, 1981, in Dayton, Ohio. Fans know that Charles's family and friends call him Chuck, Charlie or Chaz. Davis uses the full name only in official situations.

The boy has been handsome since childhood, and he inherited an attractive appearance from his parents. His father, Charles, was born in Kentucky, and mother Marina is from Manila. The actor does not tell journalists about his youth and school years.

Charles began to develop his career concluding a contract with an advertising agency. He participated in photo shoots and marketing campaigns for sports brands, FootLocker and Nike.

As it happens in show business, attractive models get an opportunity to diversify their career path. They often become film and television actors. It happened to Charles Michael Davis that way. In 2005, the young man received exciting offers from producers. The actor played the first bit parts in series during this period.

Davis starred in the series That's So Raven collaborating with Disney Channel. This project was followed by work on ABC. The actor took part in the movies Switched at Birth and Grey's Anatomy. Charles also received an invitation to join the cast of the series The Game. It was the first project in which Davis landed a recurring role. He portrayed a quarterback of the sports team, "San Diego Sabers."

In 2013, the creators of the TV series The Originals pleased fans with the news that Charles Michael Davis would play a leading role in the project. The multi-part film became a spin-off to the popular TV series The Vampire Diaries, which told about the fate and personal life of vampires living alongside ordinary people. The actor collaborated on the set with Claire Holt, Danielle Campbell, and other actors who have already managed to catch the fancy of viewers.

The actor portrayed Marcel Gerard, the character with supernatural powers. The action takes place in New Orleans. In the story, the city is under the sway of the hero. Davis worked with Phoebe Tonkin, Daniel Gillies, and Joseph Morgan. The first season of The Originals drew close attention to the actor. He attracted new fans who continued to follow the development of their favorite actor’s career after the TV series The Conversation, released in 2014.

Charles also played in the films The Proposal and Battle Scars. Gradually, Davis realized that an acting career was not so interesting as directing. He tried his hand at a new direction, and in 2017 he finally changed his occupation.

Inspired by his colleague, Paul Wesley, Davis set to work without hesitation. His first step was the filming of an episode of The Originals. For the first time, Charles was not in front of the camera but behind it. The former actor made his directorial debut shooting an episode titled High Water and a Devil's Daughter.

Journalists try to find out about the biography of Charles Michael Davis, and they mainly want to know whether he has a girlfriend. For a while, the media wrote that the actor was gay, but a long-term relationship with a woman, Katrina, provided an opportunity to refute rumors and conjectures. His ex-girlfriend is a model and choreographer. In September 2014, the couple broke up for reasons that they decided not to cover in the press. Charles was also in a relationship with his girlfriend, Monika Clarke.

Now Charles has no wife and kids, but judging by his photos on Instagram, he dates an actress and a model named Nadia. Davis does not share detailed information about his personal life, but the lovely pictures on his profile prove that there is a mutual understanding between the young people. The actor admires his girlfriend.

Charles Michael Davis realizes his potential not only in the cinema but also in photography. The actor has a personal website where he publishes his pictures. Davis has even more talents. He also can play the keyboards and sing, is fond of furniture design and visual art. As a model, the young man was interested in information on nutrition knowledge. He likes to cook, and there are only healthy and nutritious dishes in chef Davis’s menu. The actor is 6.00 ft. (183 cm) tall, his weight is 189.59 lbs. (86 kg), his eye color is dark brown.

The movie No Sleep 'Til Christmas with Charles Michael Davis premiered in December 2018. Some projects in which he was involved are little known in Russia, but journalists say that his modeling and acting career has helped him to make a fortune.

Internet sources write that as a model, Davis earned about $ 51 thousand and he had the same income, working as an actor. Now his net worth exceeds $1 million. Charles’s filmography continues to include new projects regularly.

In 2019, the actor has extended his contract with the ABC channel and starred in the series For the People, dedicated to the personal life and work of young lawyers. Davis portrays an investigator.