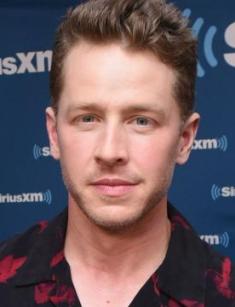 The audience noticed the actor’s talent after the top-grossing fantasy action Thor (2011) where he played Fandral. The true fame came with the series Once Upon a Time (2011-2018) and the role of Prince Charming/David Nolan.

Joshua Paul Dallas was born on December 18, 1978, in Louisville, Kentucky, into the family of Robert Michael Dallas, Jr. and Diana Raymond. Josh has a brother.

The boy spent his childhood in New Albany, Indiana. He attended a state school supporting drama education programs: children could apply for acting programs all over the world from the elementary level.

Josh participated in performances organized in the school acting club; at the age of 16, he won the Sarah Exley Scholarship that gave him the chance to enter the prestigious Mountview Conservatory.

It was a miracle for the shy boy who had never left Indiana; he could not resist the offer. As the actor remembers, it was a three-year intensive program: the first year gave the fundamental knowledge based on classics; the second year was full of 16-day work days and discovering one’s strengths; the third year was about performances, playing, and character analysis.

After graduation, the young man got hired at the Royal Shakespeare Company. Overall, he spent eleven years in Great Britain and collaborated with the Royal National Theater, English National Opera, and The Young Vic theater.

In 2006, when Josh still lived in England, he debuted in an episode of the series Ultimate Force. Further on, he appeared in the iconic Doctor Who. His role was peculiar: a statue.

The same year, the artist was invited to the German action 80 Minutes to play the main character; it was the actual debut. A couple of minor roles in British horrors and series passed by. In 2009, the actor decided it was better to be an actor in his native country; moreover, the man was pretty homesick.

American producers were impressed by Dallas’s education and British theater roles and almost immediately gave him a role in an episode of the popular series Hawaii Five-0. Soon, Joshua took part in another famous project, CSI: Crime Scene Investigation.

Finally, 2011 brought the more or less notable part in his filmography: Fandral in the Marvel blockbuster Thor. The director Kenneth Branagh was in a hurry looking for a candidate for this role: the Irish actor Stuart Townsend had rejected it several days later. As a result, rumors spread: Dallas was accepted because there was no time to find a more popular actor. However, Josh’s well-done work proved that he deserved to be chosen. Besides, fair-haired Dallas looked natural in the company of the Scandinavian god Thor.

As Josh prepared for the role, he took inspiration in Errol Flynn’s acting; the artist was Fandral’s prototype for Stan Lee:

“I tried to bring out that little bit of Flynn-ness in it. Flynn had a lot of that boyish charm, and Fandral’s got all that in him”.

The audience fancied the jester, womanizer, and braveheart Fandral. People expected Josh to appear in the sequel Thor: The Dark World (2013), but the actor could not do that because of his busy schedule when he began to work on Once Upon a Time. Thus, Zachary Levi replaced him.

In 2011, the man received a role in the fantasy series Once Upon a Time on ABC. The story is set in two reams: fairytale and our reality. Dallas played Prince Charming and an ordinary guy David. The audience enjoyed it for seven seasons until the happy end in May 2018. The actor confessed he felt bitter when he had to say goodbye to his character, but David taught him that people could choose who they wanted to be. He added that it was a great pleasure to make acquaintance with the most intelligent and passionate fandom.

Josh met his first wife, the British actress Lara Pulver in London where he moved to study acting. The couple spent together four years and split up because of the distance when Dallas left Great Britain.

By the moment the actor joined the cast of Once Upon a Time, he was single. His personal life improved immediately: he fell in love with pretty Ginnifer Goodwin who personified Snow White. The actors were feeling each other out for two years. In October 2013, Josh proposed to his beloved one.

The wedding took place in April 2014 in California, right before their first son Oliver Finlay was born. The second son, Hugo Wilson, was born on June 1, 2016.

In 2018, Dallas participated in the new TV project, the series Manifest.