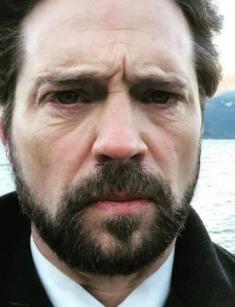 All fans of Beverly Hills, 90210 remember Brandon Walsh well. The TV series attracted millions of viewers in the 1990s. Unlike many stars who become associated with one role, the career of Jason Priestley did not stop after leaving the series. Nowadays, he is still a popular and in-demand actor who can boast not only acting skills but also the ability to make movies.

Jason Bradford Priestley was born on August 28, 1969, in Canada, in the district municipality of North Vancouver. His father was a businessman, and his mother, Sharon Kirk (nee Mason), built an acting career, but later became a real estate agent. Jason has a twin sister, actress Justin Priestley, as well as two stepsisters, Karin and Kristi.

Jason showed an interest in acting in childhood. At the age of 5, the boy told his mother that he wanted to be an actor. The woman took a favorable view of her son’s wish, and soon the family signed a contract with Sharon’s former agent. Before the age of 8, Jason had played in commercials, and in 1978 received a bit part in the Canadian film Stacey.

After that, the boy took a career break and went in for sports because he was very interested in ice hockey. However, after graduation, he became keen on acting again and began to pursue his career.

Jason’s first significant project was a small role in the TV series Airwolf in 1987. The young man played the great-grandson of a former gangster. Later, he filmed in such famous projects as 21 Jump Street and MacGyver. In 1989, Priestley appeared in an episode of the cult TV series Quantum Leap.

The next important stage of Jason’s career was participation in the TV series Sister Kate, in which the young man joined the main cast. The actor starred in 19 episodes of the project from 1989 to 1990. Although Sister Kate was quickly closed, viewers noticed his hero Todd.

In 1990, the actor got a job that brought him fame. He joined the main cast of the teen television series Beverly Hills, 90210. Jason portrayed Brandon Walsh until 1998. When his character left the TV series, the most intense romantic relationship, Brandon's love affair with Kelly Taylor (Jennie Garth), came to an end.

However, Jason did not forget about the TV show that made him famous. He was an executive producer of the project until the series finale and also appeared in the last episode.

Participation in the series was Jason’s golden ticket to the film industry, including full-length movies. In 1993, the young actor played the leading role in the comedy Calendar Girl, and in 1997 his filmography included the movie Love and Death on Long Island, in which he worked with outstanding English actor John Hurt.

Since the early 2000s, Jason has mostly starred in TV shows. He has worked on such successful projects as Call Me Fitz, The Producers, The Day of the Triffids, and Private Eyes.

The actor appeared in two TV series based on the novels of the horror king, Stephen King. In 2011, he portrayed Marty in Bag of Bones, and from 2011 to 2015 he played in the recurring role of supernaturally successful Chris Brody in the TV series Haven, based on the novel "The Colorado Kid." In 2013, the actor appeared in another cult series. Jason played himself in the episode: "P.S. I Love You" of How I Met Your Mother.

Besides acting career, the man has tried his hand at other activities. He has repeatedly worked as a director, starting with the episodes in Beverly Hills, 90210. As a director, Jason also participated in the creation of the series Van Helsing, Ghost Wars, and many other projects.

Moreover, being a fan of The Barenaked Ladies (whose song was a soundtrack for The Big Bang Theory), the actor shot the music video for their song “The Old Apartment” to help the musicians succeed. Jason also appeared as an actor in Roy Orbison's commercial, I Drove All Night, and Britney Spears's "The Boys."

Jason has a wide range of interests besides cinematography. Another significant hobby is car racing. In 1999, the man participated in the first Gumball 3000 rally. In 2002, he was seriously injured during a race in Kentucky, when his car crashed into a wall at nearly 180 miles per hour. Later he became co-owner of the FAZZT race team, which competed in the IndyCar Series.

The actor has always distinguished himself with an attractive appearance and excellent body (Jason is 5.67 ft. (173 cm) tall, and his weight is 149.91 lbs. (68 kg)), which attracted women. From 1992 to 1997, he dated actress Christine Elise who co-starred with him in Beverly Hills, 90210. In 1999, the actor married Ashlee Petersen, but the marriage was short because the couple broke up after less than a year.

The actor got drastic changes in his personal life after the accident. Make-up artist Naomi Lowde supported him very much, and soon they started a love affair. The woman became the actor’s wife on May 14, 2005. The couple has two children. In 2007, Naomi gave birth to a daughter, Ava Veronica (by the way, the same year, Priestley became a naturalized American citizen), and in 2009, they had a son, Dashiell Orson.

Fans can follow the private life of the actor and his family on Priestley's Instagram page. The actor regularly posts new photos, which mainly depict his everyday life. Jason often takes pictures at home, on vacation, with friends and children. Those who are interested in the details of the star’s life can also read his book. In 2014, the celebrity wrote and published his autobiography.

The spring of 2019 was a difficult time for Jason because his Beverly Hills, 90210 colleague and friend Luke Perry died on March 4. On Instagram, the actor could write about what happened only a few days later. It was so difficult for him to cope with the death of his friend.

Nowadays, the actor lives with his family in Los Angeles and is working on several projects. Fans can follow Jason's career on his official website, as well as on Twitter.

Jason Priestley has a net worth of $16 million.