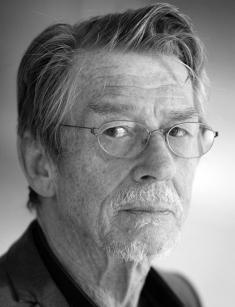 John Hurt was a true Englishman with a characteristic appearance and undeniable acting talents. The actor played many emotional and bright roles. He is the four-time owner of the BAFTA, won a Golden Globe Award, was nominated twice for Oscar and even received the accolade from Queen Elizabeth II. Each Hurt's role was unusual and exciting, but he is best known for his work in the movies Midnight Express, Alien, The Elephant Man, and Melancholia.

John Hurt was born in the small English town of Chesterfield on January 22, 1940. The father of the future star, Arnold Hurt, worked as a mathematician for some time but later chose the path of a priest of the Anglican Church and served as vicar of Shirebrook. John's mother, Phyllis Hurt, was an engineer and one-time actress. She willingly played in an amateur theater.

The family also had the oldest son Michael, who later became a Catholic priest. Besides, the parents of the future star adopted a child. It was a girl Monica. In his youth, John got used to rigor and strict discipline. The father often limited their children even in rubbing shoulders with other boys if he found them being not enough religious and well-mannered.

From the age of eight, Hurt studied at the Anglican St Michael's Preparatory School in Kent. One day the boy took part in a theatrical production of The Blue Bird. He was so fascinated by acting that he decided to become an actor when he would grow up. The parents knew about the son's plan but didn't approve of John's decision. They recommended the boy to become an art teacher instead.

After getting a secondary education, 17-year-old Hurt entered Grimsby Art School. A bit later, in 1959, the purposeful guy received a scholarship and continued his studies at Saint Martin's School of Art in London. But a year later, John managed to win a scholarship to the Royal Academy of Dramatic Art and became its student. Two years later, a graduate of a prestigious school began to receive his first roles.

John Hurt first appeared on television in the movie The Wild and the Willing (1962). Then the young actor got other minor roles, but step by step he gained valuable experience and became recognizable. He played in various projects of diverse genres. Thus, Hurt played Emperor Caligula in the BBC's historical project "I, Claudius" (1976).

In 1978, a promising actor got a dramatic role in the thriller Midnight Express, directed by Alan Parker. The movie won six Golden Globes and two Oscars. Hurt received a Golden Globe Award for Best Supporting Actor, and also won a BAFTA. John competed for Oscar but lost to Christopher Walken.

At the beginning of his career, John Hurt starred in a science fiction horror film called Alien (1979). He was given the role of security officer Kane, who was impregnated with an Alien embryo. In general, this movie has become a kind of epoch-making, received many awards, including Oscar, and also was a good start to numerous famous projects with Sigourney Weaver.

In 1980, Hurt got the major role in the drama The Elephant Man by the cult director David Lynch. John's acting skills were again appreciated and brought him a nomination for Oscar. Four years later, a talented actor played the role of Winston Smith, a key character of the famous novel 1984 by George Orwell.

In 1991, Hurt was again nominated for BAFTA. He played a small role in the movie The Field by Jim Sheridan, but his excellent acting was worthy of such a solid award.

John Hurt had repeatedly worked as a voicing actor. For example, in 2006 he acted as an invisible narrator in the film Perfume: The Story of a Murderer. Moreover, Hurt often voiced cartoons for children, such as The Lord of the Rings (1978), A Monkey's Tale (1999), The Tigger Movie (2000), and many others.

The film adaptation of the story about Indiana Jones complimented the list of the movies with his participation. In 2008, Hurt appeared in the movie Indiana Jones and the Kingdom of the Crystal Skull, where he played the role of Harold Oxley, an archaeologist and protagonist's friend.

In the same year, he began working in a fantasy series Merlin, developed by BBC channel. The plot is based on the legend of the wizard Merlin, as well as his relationship with King Arthur. John Hurt got one of the important roles and portrayed The Great Dragon. This series was very popular with British viewers. By 2012, five seasons have been released.

Even at a mature age Hurt continued to appear in movies annually. He often got secondary roles, but viewers always remember his emotional and eccentric characters. For example, in 2013, hurt played a military doctor in the popular TV series Doctor Who.

Until his death, Hurt was working on several projects. In 2016, The Legend of Tarzan with his participation was released. The dramas My Name Is Lenny, Hypergraphia and a historical film Darkest Hour were scheduled for 2017-2018.

An interesting fact is that John Hurt was often compared with another, no less famous actor Ian McKellen. Their resemblance and almost identical height attracted the interest of both viewers and filmmakers. In one interview, McKellen told a funny story which happened during the filming of The Hobbit. When he argued with Peter Jackson, the director often shouted that he was tired of capricious McKellen and demanded to call John Hurt. One day Ian said that he was John Hurt and had been waiting for a long time to get rid of McKellen, but no one noticed that.

John Hurt's relationship with women was as intense as his acting career. He married for the first time in 1962. His choice was Annette Robertson, an actress with a spectacular appearance. But this marriage lasted only two years, and in 1964 the couple broke up.

Later the actor had a long relationship with model Marie-Lise Volpeliere-Pierrot. They had been together for long 15 years, and only the tragic death of a French woman in 1983 could separate the couple.

In late 1984, the actor married for the second time to an actress Donna Peacock. The star couple wanted to have children, but even artificial insemination didn't make their dream come true. This led to the divorce in January 1990. The man didn't stay long alone and a few days later married Joan Dalton, a director's assistant. The couple had two boys, but even the children could not keep their parents together. In 1996, John Hurt divorced his third wife.

After that, the famous actor remained single for a long time. Only in 2005, Hurt decided to marry for the fourth time, and his choice was Anwen Rees-Myers. The woman worked as an advertising producer.

In 2015, John Hurt announced that he had a serious disease, pancreatic cancer. The disease was diagnosed on an early-stage, so doctors were confident in a satisfactory outcome. The actor remained optimistic and was going to work even during the treatment.

The man struggled with the disease for about two years, but it was the reason for the death of a talented actor. He died on January 25, 2017, at his home in the small town of Cromer.