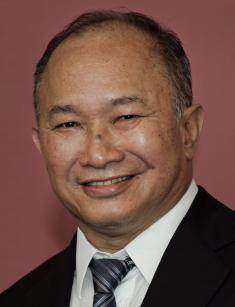 The director, the editor and the screenwriter John Woo could not succeed in the world of cinema for a long time but perseverance and persistent pursuit of the goal brought the long-awaited glory to the man. He was famous after the movie The Killer, Bullet in the Head and Hard Boiled.

The biography of the future director began in the Chinese city Guangzhou, where he was born in May 1946, the height of the Civil war in China. He is Chinese. At the age of 3, John was diagnosed with a serious disease, as a result of which doctors were forced to perform surgery on the spine. After that, he could not walk properly for a long time, limped. The boy managed to regain his former health only at the age of 8.

When Woo was five years old, his family left his hometown and went to Hong Kong. They had nothing in the new place, so John's family lived very poorly. His father is a researcher and a philosopher had a pedagogical education. However he did not work at school because of tuberculosis, often lay in hospitals. The mother had to work on the construction site to feed the family.

In 1953, there was a fire in the house where Woo lived, the house burned out and the family remained on the street. However, charitable donations to victims of natural disasters allowed them to move. The boy faced violence and crimes on the streets early, which was reflected in his films in the future.

John was brought up in the Christian religious family, so he even dreamed of becoming a priest as a child. But he discovered a passion for films later, French cinema and American westerns especially impressed the young man.

Since 1969, John has been building a career as a director. He was hired to work in a local studio as a script editor and the man was an assistant of a director of the studio in 1971. Woo had the director's debut in 1974, the first film The Young Dragons appeared in his filmography at that time. This action in the style of kung fu, which consisted of carefully thought out combat scenes and was characterized by the dynamic work of operators. And later he shot the comedy film with the comedian Ricky Hui in the main role.

In the middle of 1980, John experienced a professional failure because several movies created by the director caused disappointment of the audience and the critics did not spare negative statements about his work. Woo met with the producer Tsui Hark at that time, who tells him the way out of this situation and even finances his next project. It was the movie A Better Tomorrow in 1986, which blew up the local market and broke all records of popularity.

At the end of 1980 and beginning of 1990, the director releases a few more movies with the Chinese actor Chow Yun-Fat in the main role. There were the hard gangster thrillers. Also, the director received international recognition thanks to the release of the film The Killer but the audience did not appreciate his next movie Bullet in the Head, which was released a year later, so the huge budget burned, which was spent on the shooting.

The last film of Woo before his immigration to the United States was the thriller Hard Boiled in 1992. John filmed America's first tape on Universal Studios and immediately faced challenges in cultural adjustment. The man is not used to be limited in the number and the episodes of violent scenes and he couldn't keep up with the schedule of work.

When the initial pictures were reviewed, the studio management took over the management of the project and edited the photos, which should suit the American audience. So there was thriller Hard Target with Jean-Claude Van Damme in the main role. And although the film was not rating, the director continued to work in Hollywood.

After a 3-year break, Woo shoots a new adventure thriller Broken Arrow with John Travolta and the crime thriller Once a Thief. And the next in the filmography is the movie Face/Off, where Travolta, as well as Nicolas Cage, played the main role.

The management of the last studio again tried to cut, in their opinion, the cruel scene, so John decided to establish a partnership with Paramount Pictures. In the end, it paid off; the new management gave the director more freedom of action. As a result, the film had more than $ 200 million and was nominated for an Oscar in several categories.

In 2000, John Woo shot the adventure thriller Mission: Impossible II with Tom Cruise and although critics spoke negatively about the film, the world box office of $ 500 million speak for themselves. At the same time, $ 125 million was spent on the shooting. Also significant for his career were the films Paycheck (2003), All the Invisible Children (2005) and two parts of Red Cliff (2008).

In 2007, Midway Games developed a computer game, John Woo participated in its creation and the plot was based on the continuation of his film Hard Boiled.

In 2010, the man removed the thriller Reign of Assassins and a little later two parts of the historical drama The Crossing. The film is based on real events that took place in 1949 and took the lives of many people. And in 2017, he presented the new film Manhunt. In 2018, the director had many plans for new movies but he did not realize any project.

Not much is known about the director's personal life. In 1976, the man married the girl Annie Woo Ngau Chun-lung. For many years of marriage, the wife gave birth to the spouse of three children, who already grew up today and have their own families.

The director does not have any page on "Instagram" and other social networks, so fans of his work do not have the opportunity to see photos to track the latest events of Woo's life.

In 2019, John Woo plans to make the film Ye shou zhi ri; it will be an English remake of the film Yajû no seishun, the classic of Japanese cinema Seijun Suzuki. He has long dreamed of doing this project but did not dare to start.

The plot of the remake is based on the confrontation of the young generation of Japanese Yakuza with the "old" Russian mafia. The audience is looking forward to the release of a new tape.

Also, the man is involved in the shooting of the film 8½, along with other directors. This is an 8-part anthology that traces the history of Hong Kong from the 1940s to the present day. John Woo has a net worth of $60 million.