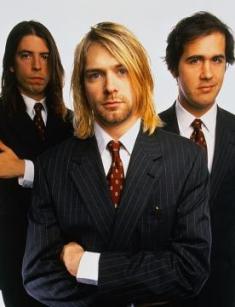 Even though the legendary band Nirvana did not exist for long, it remained in the history of the world of rock forever. The whole word enjoyed the hit songs by this cult American band. People hated and admired Nirvana, but no one could remain indifferent to it.

Two young men, Kurt Cobain and Krist Novoselic met in high school for the first time, but they did not notice each other for a while. Later they became friends, only because both of them would often go see the gigs of The Melvins band.

Cobain, who in the future became the guitarist and the lead signer of the band, for a long time tried to persuade Novoselic to create their own band, but the bassist did not agree. Three years after the guys had met, in 1987, Krist listened to the recroding of Fecal Matter, the first project of Cobain, and suggested creating a band himself.

Their first drummer was Bob McFadden, who left the project after a month. After that, the young guys invited Aaron Burckhard and started performing that same song, Fecal Matter, with which the story of the band began. Soon the members decided to create new material.

Aaron Burckhard did not stick with the band for a long time either and left it after a couple of months. They found a replacement for him very quickly, Dale Crover, with whom the band recorded their first demo-songs, became the new drummer. However, this guy was soon replaced by a new one too, this time, it was Dave Foster who became another member of the band.

For the first few months of existence the band changed about ten names, but at the beginning of 1988 musicians firmly decided on the name Nirvana. Cobain admitted that the participants chose a nice and cute name, not rough and dirty, as it was usual for punk rock bands at the time. The first performance under the name Nirvana took place in March 1988, and later a new drummer, Chad Channing, became a consistent member of the band for two years.

The first official single of the band was Love Buzz/Big Cheese And in the summer of 1989, Nirvana presented its first album entitled Bleach, working on it with the Sub Pop label. Jack Endino became the producer of the record.

As for the genre of the debut album of the band, it was influenced by both The Melvins and Black Sabbath. After the release of the album which immediately became a hit on small college radio stations, the band went to conquer the whole of the United States, performin The band members had a kind of "ritual", to destroy the equipment after each concert. Novoselic admitted that they did it on purpose to be able to leave the stage sooner.

Kurt created lyrics and music for each of the songs. He usually composed songs while playing the acoustic guitar, trying to create a mix of heavy and light sound. The musician stressed that he doesn't like to be considered the only author, because the role of other members in making certain decisions about each of the songs was no less vital than his.

Jason Everman, whose name was featured on the cover of the album as a guitarist, allocated funds for their first album. Even though the guy himself did not participated in the recording of the tracks, members of Nirvana wanted him to feel a part of their gang.

In an interview, Kurt admitted that the first tracks of the band were cutting and raw. Over time, they became more and more pop, and the front man himself felt more satisfied with their creative work. The musicians came to a serious step: in their songs, there were themes of love, feelings, and conflicts.

In the early 90-s the guys started working on the material for their next album. During studio work, the founders of the band decided that Chad was not the kind of drummer that they needed. And Chad Channing himself expressed extreme dissatisfaction with the fact that his say in composing the songs was insignificant. Because the young men failed to find common ground, the musician left the band, and a couple of weeks later, Dale Crover took his place behind the drums, and then came Dan Peters.

This man, however, was not the last drummer either. After a shot time, the founders of Nirvana met Dave Grohl, and two minutes after the beginning of the audition, they knew that he was the one that Kurt and Krist were looking for. This is how the issue with band members was resolved for good.

After signing a contract with a new label in 1990, the band began recording their next Studio album, titled Nevermind. The first single "Smells Like Teen Spirit" from this album became popular very quickly because of its constant broadcasts on MTV Channel.

While on tour in late 1991, participants began to notice that the interest in Nirvana had increased significantly. In January of the following year, the band's second album reached number one of the Billboard charts, surpassing the record of Michael Jackson.

In February of 1992, Cobain and the leader of the Hole rock-band, Courtney Love got married. In mid-August, the couple had a daughter whom they named Frances Bean Cobain. Citing exhaustion, the band decided not to go on another tour in support of their second album, after playing several concerts, including their performance at the Reading festival in England.

Then there were rumors about Kurt's poor health and a possible breakup of the band. Knowing this gossip, the band decided to make a joke out of it and took Kurt to the stage in a wheel chair. After a short pause, the musician stood up and joined other members.

To record the third album, In Utero, the band invited producer Steve Albini. This decision was a deliberate move by the members who wanted the third album to sound cheeky, raw and with minimal processing.

The album was recorded in two weeks, but was not released immediately. The final sound of some songs did not satisfy the musicians, so they invited Scott Litt to help them remix the songs. The album In Utero debuted in the Billboard 200 chart in the Fall of 1993, taking the first place. After the release of the record, Nirvana went on a big United States tour, taking a second guitarist, Pat Smear with them.

In early 1994, the band of musicians went on tour in Europe. After the concert in Munich, Cobain fell seriously ill: he was diagnosed with bronchitis and laryngitis. The performance scheduled for the next day, was postponed.

Three days later, Kurt's wife found him unconscious, and he was sent to hospital. Later, on a press-conference, the doctor announced that the musician took prescribed medicine together with a significant dose of alcohol. After that, numerous concerts were canceled.

In the days that followed, Kurt's long-lasting heroin addiction made it hard for the musician to do anything. He was persuaded to go to rehab, but a couple of days later he climbed over the fence and flew to Seattle. On April 8, 1994, Cobain was found dead at his house. The official version of the death is that the musician shot himself with a gun. The band broke up.

Nirvana after the breakup

Since with his death, Kurt took the band Nirvana with him to the grave, the members of it began to engage in their solo projects. Despite this, after the tragic death of Cobain, a couple of Nirvana albums were released, the first of which appeared in November 1994. In two weeks, a video collection of the band's performance came out. Kurt selected the bulk of the material himself.

The dispute broke out around the song "You Know You're Right". Courtney insisted that this track should be released in the collection of the best works of the band. The trial lasted for more than a year, but in the end, the musicians reached an agreement. The musicians and Courtney decided to release a collection of hit songs, including the above composition, and titled it Nirvana. Cobain's early records came out two years later and was called With The Lights Out.

In the spring of 2006, Love decided to sell 25% of Nirvana songs, which belonged to her, and Larry Mestel became the buyer. So, after three years, the first album of the band was reissued on CD and vinyl, twenty years after the original release.

In addition to the newly mixed tracks, the album included a previously unreleased record of the Portland concerts on February 9, 1990. Every year, there appeared new fans of no longer existing Nirvana, so the release of the anniversary edition of Nervermind could not have gone unnoticed.

Krist tried to create new band, but non of his projects had any success. In 2004, the musician published a book where he told the story of his past and his plans for the future.