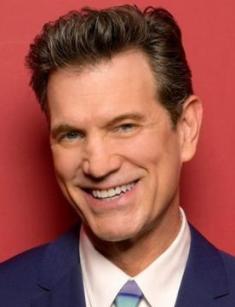 Chris Isaak is an American rock’n’roll musician and actor; he often called himself the successor of Elvis Presley. Today, the creator of the hit “Blue Hotel” remains popular in music and cinematography and collaborates with Warner Brothers Records.

The future singer was born in Stockton, California, on June 26, 1956, into a middle-class family. The boy had two brothers. Although the parents could not afford to spend much money, they were proud of a collection of the 1940s songs performed by famous artists. Little Chris grew up listening to Dean Martin, Elvis Presley, and Bing Crosby.

Isaak attended the San Joaquin Delta Community College and participated in an exchange program in Japan. As the vocalist told journalists later, he knew he belonged to music, and no other sphere could take his interest. The young man was engaged in boxing and worked as a guide at a local motion picture studio; he also created romantic ballads and performed them to the accompaniment of the guitar.

One day, Chris got his nose broken during a boxing match and had to have surgery. As a result, his appearance changed, and women started fancying him. Sweet voice and sad songs only added more romanticism to his figure.

Chris Isaak’s music career began when the group Silvertone was founded. The young artists paid much attention to high-quality sounding and played the percussion, solo, slide, and bass guitars, and electronic organ; the audience noticed them quickly.

Arrangement was a significant part of the group’s work; it turned into their trademark. Although it is often difficult for musicians to find a common language, Silvertone were among those who successfully collaborated and had no bitter conflicts.

In 1985, the artists signed a contract with Warner Brothers and presented the debuting album, but it failed. Critics did not appreciate Isaak’s manner that seemed to be a copy of predecessors’ works in the same genre. The next disc, Chris Isaak, took great pains, yet it was well worth it: the project appeared in Billboard Top 200. The vocalist wrote ten songs for the album; Graham Gouldman created the eleventh.

The 1989 album Heart Shaped World was the breakthrough: the sales volume was recording in comparison with the previous collections. In 1996, the disc became multi-platinum; more than two million copies were sold. Despite the success, Warner Brothers stopped collaboration with the band and explained that the commercial efficiency was not satisfactory. However, David Lynch’s interest saved the group: the song “Wicked Game” appeared in his drama Wild at Heart.

Music experts often compared Chris Isaak and Elvis; many saw Chris’s imitation and drew analogies between their hits. Isaak’s expressive voice and high vocal range created the same charm that Presley was famous for; however, the claims that the musician was the icon’s successor seemed to be too loud.

Chris was wearing costumes like James Dean, had a fashionable hairstyle, and conquered women’s hearts with his lyrics. 1991 marked international recognition: glossy magazines put the artist’s photos on their covers, and collections of hits were released. Following the popularity of Lynch’s movie, the disc with “Wicked Game” was in high demand in the United States and abroad. The video for the hit with Helena Christensen was frequently broadcast on television.

All of Silvertone’s albums were tremendously popular. Isaak won the Musician of the Year in 1996 and became a spokesperson for several brands.

Chris Isaak’s stage type was beneficial and helped him get closer to the audience. The artist’s TV debut took place at The Tonight Show Starring Johnny Carson where he was invited as a guest. Further on, the man appeared in series, such as Great Performances, Friends, American Dreams, and so on.

The actor had both cameo and regular parts. Married to the Mob became the first full-length movie; The Silence of the Lambs followed in 1991.

The next year, Isaak contributed to the series Twin Peaks and brought much love from viewers. The collaboration with Bernardo Bertolucci in Little Buddha strengthened Chris’s positions.

While the new album San Francisco Days was not much popular, the artist enjoyed fame on the TV screen and received roles in series and movies. He also had his own program, The Chris Isaak Show, for a while.

Chris Isaak is a person of many talents. He likes to draw comics and animation; surfing is another great passion. The man is close to his brothers, Jeff and Nick, and often meets with them.

Little is known about Isaak’s private life; there is no information about his current relationships and children. Long ago, the artist had to go through a tragedy: he courted a girl for a long time, but she died soon after they became a couple.

Just like many years ago, Chris Isaak holds true to his style and performs lyric music, similar to “Can’t Help Falling In Love With You”.

The singer continues to give concerts and works as a composer, producer, and director. The man has not lost interest in television and participates in various projects, such as Sheriff Callie’s Wild West.