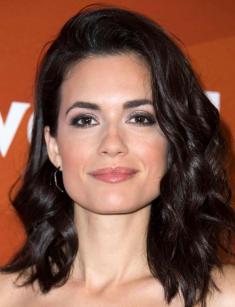 The profession of an actor seems to have a special magnetism. No wonder that athletes, musicians, and models try their hand on the stage or the set. Among the last are two foreign hot brunettes – Olivia Culpo and Torrey DeVitto. And the audience, especially their male half, are only happy, enjoying the charming and attractive performers of the main and episodic roles.

On the 8th day of the first summer month, when the rapper Kanye West, the singer Nancy Sinatra, the keyboardist Nick Rhodes of Duran Duran and the former first lady Barbara Bush celebrate their birthdays, Mary and her husband Liberty DeVitto had the second of four daughters in 1984. The baby was named Torrey Joel after the Italian mother. The place of birth is Huntington but the early years fell on a suburb of Florida called Winter Park.

As a child, the girl and her family often moved from place to place due to the busy touring schedule of the head of the family. A man served as a drummer of the Grammy winner Billy Joel for 30 years. By the way, he did not forget to mention the birth of Torrey at his concert, which was at Wembley Arena, before the performance of the single The Longest Time. According to DeVitto's recollections, she and the daughter of virtuoso pianist Alex grew up together and their families celebrated every Thanksgiving Day together.

Mary's mother was a close friend of the American singer Stevie Nicks, so it is not surprising that, Torrey experienced a craving for "melodic" and performing arts, surrounded by music from all sides.

At the age of 6, the girl started to play the violin and achieved a place in symphony orchestras at high school, which the young talent had 3 on her account. It is also known that in adolescence, she accompanied at the wedding ceremony of celebrities – Christie Brinkley and Peter Cook.

She studied at Youngsville Elementary School and then at Winter Park High School, she took lessons in Kings Park. Then she drew attention to acting, she attended Zoe & Company, then became the best in Crenshaw Performing Arts School.

"I started playing the violin when I was six years old and I thought I could be a professional. Only when I was 15 years old and when I was interested in acting, I realized that it is exactly what I always wanted to do," - Torrey shared her memories of the past.

At the age of 15, the girl took her first steps in the modeling business, the parameters of her slim body were (she was 5,5 feet (170 cm) tall, weighed 119 lbs (54 kg)), she starred in commercials, flashed on the covers of glossy magazines. After graduating from high school, she stayed in Japan to work as a fashion model at the Avenue One Agency for three summer months. Then the list was replenished with the Ford Modeling Agency.

However, the fashionable field was boring for her quickly and she decided to focus exclusively on the stage activity, where she was very successful. However, the actress never hid that she used the fashion industry as a kind of springboard to get on television and gain a foothold in the cinema.

The long-awaited acting debut of Torrey occurred in 2003 in the TV series Dawson's Creek (Kicking the Dog), where she was entrusted to the episodic role. There was also a cult serial Scrubs with a small appearance of DeVitto the same year.

The second full-length film of the former model was a movie I’ll always know what you did the last summer, she participated in the movies Beautiful People and Drake & Josh and Jack & Bobby at the same time.

There are a lot of series in the creative biography of the celebrity. For example, loved by many people Pretty Little Liars, One Tree Hill, The Vampire Diaries (her character is Meredith Fell), Chicago Med and Chicago P.D.

Spending most of his time at the sight of television cameras, the celebrity does not forget about charity, serving as a Hospice Ambassador.

"There's nothing that I was so proud of or was more passionate about than this job. It is my life's work. A passion, which is the most satisfying thing I know. I hope I can inspire others to join it," – DeVitto said.

Beauty is a terrible thing. Especially a woman strength, on which it is so difficult to resist for the opposite sex. A lot of colleagues on the stage were fascinated with the influence of charms of Torrey.

According to the omniscient media, the first was the comedian and musician Drake Bell. They had a romantic relationship for a year.

After that, there was a fateful acquaintance with Paul Wesley on the set, who proposed to her 4 years later. The young people had a wedding secretly in New York in April 2011 but this marriage lasted not long. The couple divorced in 2013. Many journalists and fans are inclined to guess that the reason was the busy working schedule of the spouses.

In December of the same year, the girl published a joint photo with the surfer Carlos Muñoz on her page on "Instagram," who is from Puerto Rico, accompanying the post with an intriguing comment. According to rumors, the young people met for no more than 12 months. Then Torrey's lover was Rick Glassman and there was a place in the heart of the beautiful girl for the dancer Artem Chigvintsev, however, it lasted for a short time.

However, DeVitto did not think of sufferring, she had another affair with a "colleague" Jesse Lee Soffer, both accounts of the couple are full of joint photos.

Torrey continues to conquer cinema actively. She's busy in the series, which tell about the brave medics, firefighters and police in Chicago, she starred in the short film Flyby. The movies The Hoaxing and Cold with the participation of the actress were prepared to be released.

Also, the young woman worked on the creation of a documentary film Saving Daisy, which tells about a woman, who survived sexual violence and struggled with injuries after it during her life. Torrey DeVitto has a net worth of $5 million.

In early February 2019, the press started talking about DeVitto again, the star of the series left this mortal world. But fortunately, the rumors remained rumors. And delightful news came after the unsightly one. People said that Torrey would be the new lady of James Bond.

She prefers to keep in touch with loyal fans on social networks, putting her pictures both in stunning evening dresses and in swimsuits of different colors and styles.