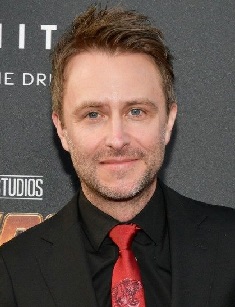 Chris Hardwick is an American TV personality, famous for hosting shows about pop culture. Besides, he was also lucky to build a real nerdy empire that grew from his Internet podcast series.

Chris Hardwick was born on the 23rd of November, 1971, in Louisville, Kentucky. His mother, Sharon Facente, was of Italian American descent, whose father owned a bowling club. This was the place where Sharon met her future husband, Bill Hardwick, who eventually became Chris’s father. Bill Hardwick was a professional bowler nicknamed «The Magician».

The boy was raised Roman Catholic and attended St. Benedict at Auburndale High School in Cordova, Tennessee. However, he was raised at Memphis, where he learned to play chess and even became a pro at some point, winning a local Junior High Championship. He was later sent to a Jesuit school in Aurora, Colorado, moving to the west. Chris spent a year before graduation in Loyola High School, another Jesuit educational institution, aimed at bringing up decent young men.

In 1989 Hardwick enrolled at the University of California, Los Angeles where he studied philosophy and was a member of the oldest fraternity, Chi Phi. However, he left it after a freshman year. Hardwick was Will Wheaton’s roommate for some time, since they met each other in cinema in Burbank, California, and became friends.

Perhaps the most prominent achievement of Hardwick is his memorable manner of hosting, but it didn’t appear from anything.

After graduating in 1993, the young man was hired as a DJ on LA radio station, which might have also been considered as some type of anchoring, but a music one. Very soon he appeared on TV with an MTV Trashed, a game show, which he hosted during its whole existence of 50 episodes. The players of this game had to answer questions based on pop culture, and in case they didn’t do it they got their personal belongings «trashed». A slightly intellectual game, isn’t it?

Hardwick continued with another MTV show Singled Out, which he co-hosted with Jenny McCarthy, currently famous for her activism. The program featured one blindfolded contestant, who was supposed to choose the one from 50 candidates considering only oral descriptions from the hosts. Singled Out turned out to be a classic dating show since it added more fun and charm when participants weren’t looking for something serious. Chris Hardwick stayed with the show until 1998.

In 2001 he became an anchor of another dating show, Shipmates, that included filming of one pair on a blind date, which took place on a ship. However, it was a syndicated one and lasted only for two seasons, so it didn’t bring Hardwick much recognition.

Chris wasn’t widely known as a host for that time, so he took a break in this sphere and focused on the other aspects of his career.

In 2007 Hardwick came over to the nerdy side and hosted Wired Science on PBS, which was a TV special of the magazine Wired, which he wrote for. It was a periodical covering that topic of how innovations changed the world around us.

In late-2000 Hardwick contributed to Web Soup, a weekly series focusing on the news of pop culture, by writing and hosting its TV spin-off, The Soup.

In 2010 he launched The Nerdist Podcast, that brought him real success. The whole podcast was Hardwick’s idea, but he hosted it with two other comedians, Jonah Ray, and Matt Mira. Currently the show is operating under the name of ID10T with Chris Hardwick; however, it still features same-format episodes. Solely hosts or, occasionally, with guests, hold a conversation discussing any nerd’s routine. This podcast became really popular, so Hardwick ended up establishing a company with a former CEO of a geeky publisher Peter Levin.

Nowadays their company is a part of the digital division of Legendary Entertainment, which is an American media giant, obviously known by everyone. Their creation is entitled Nerdist Industries, LLC and provides various content for several podcast series, TV specials and a YouTube channel.

2011 was a year of a new spiral of luck for Hardwick. AMC hired him as a host of Talking Dead, a show that followed each episode of The Walking Dead and aimed at discussing the events in the series. Initially, Hardwick’s TV time equaled to half-hour, but then it was prolonged to one hour since his live had a positive response from the viewer. The same situation happened with the show Talking Bad, that was aired after the final episodes of the famous series Breaking Bad. In February 2016, Hardwick also hosted Talking Saul, which referred to another AMC series Better Call Saul.

Moreover, he had a chance of anchoring the show that was named after him, @midnight with Chris Hardwick. It was a panel game show that included questions on various Internet-related topics.

Hardwick’s first stand up show was launched in January 2008, on Comedy Central. His partner was Mike Phirman, who was his friend since college. They have already tried doing some gigs back then, but it didn’t work out. The duo performed a lot and also recorded some songs for Rob Zombie’s animated film and even an album of their own material.

Chris worked solo too and made a tour around the country as a featured comedian alongside Joel McHale, who was famous for his TV contribution.

In 2010 Hardwick made several appearances as a guest on such comedy shows as John Oliver's New York Stand-Up Show and The Benson Interruption.

He also holds credits for a stand-up special Mandroid which was released on DVD and CD.

The talented podcaster took part in some voice-over works too. Once Hardwick lent his voice to Alexander Hamilton in a short radio series, then was Otis from Barnyard, although originally the character had the voice of Kevin James. He continued with animated series and voiced Green Arrow in the Batman series, Sokka in The Legend of Korra and Glowface, the main antagonist in animated TV series broadcasted on Nickelodeon.

Hardwick has few movie appearances. He began with a small role in Terminator 3: Rise of the Machines and also took part in two movies of Rob Zombie. These were horror films House of 1000 Corpses and Halloween II. In 2009 Hardwick played in a comedy The Mother of Invention, which was made in a format of mockumentary and told a story of an amateur scientist with grand ambitions.

Hardwick is pretty exposed when it applies to his personal life. In the late-1990s, while working on MTV, he met his first fiancee, an actress Jacinda Barrett, but the couple eventually split up disregarding the engagement. Then he dated Janet Varney, an actress famous for voicing Korra, the main character in the animated series The Legend of Korra, from 2004 to 2011. Later Hardwick got together with his colleague from Nerdist Industries, Chloe Dykstra, but they drifted apart after a three-year relationship. Eventually, he met his future wife in the person of Lydia Hearst and they got married in August 2016.

What is more, Hardwick is on friend terms with Joan Rivers.

He also overcame his issues with alcohol and stays sober since 2003. Besides, Chris lost a lot of weight in the 2010s, but his fat photos are still available.

Hardwick’s estimated net worth is $15 million.

In June 2018, Hardwick appeared to be under undeserved «attack» — his ex-girlfriend Chloe Dykstra published a text featuring someone very similar to Chris. She told about the abuse, both emotional and sexual, which she suffered from dating the celebrity, and joined the movement #MeToo.

At once all the shows Hardwick hosted were put on a pause, and his name was even deleted from the website of his own company! Luckily, he wasn’t fired. An investigation lasted only for two months, and all accusations were dismissed. What is more, Dykstra refused to participate in the case and stated, that she said everything she wanted to.