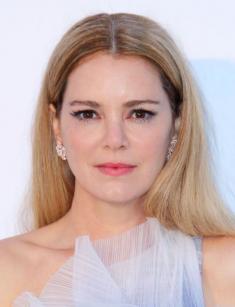 Jacinda Barrett is an American-Australian actress and a former model, who achieved success in the US after participating in the television program channel MTV The Real World. She was well known for her roles in the films Bridget Jones: The Edge of Reason Ladder 49, Poseidon, and The Last Kiss.

Giacinta Juanita Cordelia Arabella Luciana Rosalina Barrett was born on August 2, 1972, in the capital of Queensland, Brisbane, in the middle-class family of Jerry and Lyn Barrett. Her father is a professional firefighter at the airport.

In 1988, she participated in the annual Australian competition "Dolly Covergirl" while studying at Kenmore State High School and took first place. Jacinda attended San Sisto College when she was 17 and started modeling. Later, she left home before coming of age to work as a model throughout Europe and travel the world.

Jacinda first appeared on television as an actress in 1995 on MTV in the 4th season of the reality show The Real World, dedicated to London this time. The project focused on a group of different strangers living together for months outside their home country. The audience remembered the aspiring actress mainly because of the purchase of a dog named Legend and she refused to train it and this fact upset other actors.

Later she entered the British American Drama Academy in Oxford and made her debut in the horror film Campfire Tales in 1997. Barrett appeared in one of the materials of the September issue of the Maxim magazine, advertising the new autumn television series next year. Her appearance was intended to promote the NBC soap opera Wind on Water, but the show did not last longer than one season.

A breakthrough on the big screen happened in 2003 when Jacinda starred in the melodrama of the Oscar-winning director Robert Benton's The Human Stain with Anthony Hopkins, Nicole Kidman, Ed Harris.

Later, the actress starred in the action movie Ladder 49 in 2004, in which her father, a firefighter was honored. Joaquin Phoenix and John Travolta also took part in the project. The film covered 10 years of the Baltimore fire family's life. Then she performed one of her most famous roles for the mass audience - beautiful Rebecca who fell in love with Bridget Jones in the second part of the trilogy about the charming fat girl Bridget Jones: The Edge of Reason.

Jacinda Barrett in 2006 added to her filmography several works: the disaster movie Poseidon with the actor Josh Lucas and the director Wolfgang Petersen, the comedy School for Scoundrels with the ex-husband of Angelina Jolie, Billy Bob Thornton, in the main role and the melodrama The Last Kiss.

In 2007, Jacinda was selected as the best actress by the Australian Film Institute. She was awarded for her role as Jenna in the movie The Last Kiss. The American film critic Anthony Scott said about her game following:

"Jacinda Barrett draws the whole show to her, playing the beautiful and reasonable wife of the main character Michael. She copes with a changeable and realistic role of the despised woman with ease".

In 2010, the actress starred Marissa in the drama Matching Jack; it is about a woman who discovers within 24 hours that her only child Jack (Tom Russell) is seriously ill and her husband (Richard Roxburgh) cheated on her throughout the marriage. Despite the fact that Jacinda grew up in Brisbane, Matching Jack was her first Australian project.

Since 2011, the creative biography of the Australian woman was supplemented by the number of successful series - the comedy-drama Suits, the crime thriller The Following, the detective Zero Hour and the dramatic thriller Bloodline. The actress won fame in film and television, proving that she can cope with both a comedy role and a dramatic one. In 1997, the magazine "People" called the woman one of the 50 most beautiful people in the world, publishing a photo of the celebrity in a swimsuit.

Previously, Barrett was engaged to the TV host and comedian Chris Hardwick, before her marriage to the American actor Gabriel Macht in 2004. The couple has their first child a girl named Satine Anais Geraldine Macht, who was born on August 20, 2007, in Los Angeles. The second child, a son named Luke, was born on February 26, 2014.

Barrett likes to parachute, she explains it like this:

"The more you do it, the scarier it gets. After a while, you realize that you are thrown out of a perfectly good plane for no apparent reason."

The woman likes to post the photos from her personal life on Instagram with her husband and children, screenshots of quotes she liked and landscape pictures.

In 2019, it is planned to release two pictures, which was attended by the Australian actress in the thriller Hide and seek and in the fantastic horror Angels' Brigade (the shooting took place in 2018), it is about a 16-year-old girl who in the course of an unusual game is in a parallel universe, where all fears turn into reality.

Hide and seek will be a remake of the Korean horror film of the same name in 2013. Jacinda, Jonathan Rhys Meyers, Joe Pantoliano and Mustafa Shakir will take part in the project. The shooting of the film start in New York.