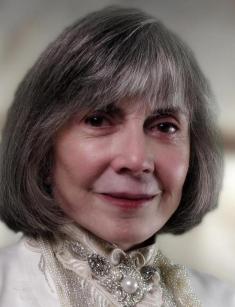 Interview with the Vampire was and remained the most famous movie about vampires. But in the beginning, there was a book. A much-loved American fiction author and “the mother” of vampires, Anne Rice started to write her series The Vampire Chronicles in the days of 1970s. She continues to glad her loyal fans of the new stories of her unreal world, where in the shadow of human civilization the creatures of a different race are hidden for many years.

The author Anne Rice was born in New Orleans on October 4, 1941. She was the second of four daughters of parents of observant Irish Catholic descent. Her father Howard O’Brien was in the Navy during World War II, and after that, he was employed as a personnel executive for the U.S. Postal Service. The man also had an interest in writing, but his only novel The Impulsive Imp was published posthumously.

The mother Katherine Allen O'Brien was a standout who was not in line with the working standards. That is why Rice’s birth name is Howard Allen O'Brien because apparently, her mother thought it was a good idea to name her after Howard as her father's name. And she had the impression that naming a woman Howard was going to give that woman an unusual advantage in the world.

However, she adopted the name ‘Anne’ when she started attending Catholic school, her mother Katherine accepted it because by that time she had realized that her daughter was confused by her real name. Rice was confirmed in the Catholic Church when she was twelve years old and took the full name Howard Allen Frances Alphonsus Liguori O'Brien, adding the names of a saint and of an aunt, who was a nun.

When Rice was fifteen years old, her mother died as a result of alcoholism. Soon afterward, she and her sisters were placed by their father in St. Joseph's Academy. Rice described St. Joseph's as

“something out of Jane Eyre ... a dilapidated, awful, medieval type of place. I really hated it and wanted to leave. I felt betrayed by my father.”

In November 1958, Rice's father married the second time and moved the family to north Texas, purchasing their first home in Richardson.

Graduating from Richardson High School in 1959, Rice completed her freshman year at Texas Woman's University in Denton and transferred to North Texas State College for her sophomore year, but dropped out when she ran out of money and was unable to find employment. She soon decided to move to San Francisco, where she found work as an insurance claims processor.

Despite the woman’s reactionary mind, Anne had to stand over the birth of the Hippie movement as she lived in the soon-to-be-fabled Haight-Ashbury district. That did not affect the writer's life one way or the other. She remembered: “In the middle of Haight-Ashbury in the 1960s, I was typing away while everybody was dropping acid and smoking grass.” Rice attended San Francisco State University and obtained a B.A. in Political Science in 1964.

In 1973, Rice’s literary serious career began affected by the loss of her daughter. Rice took a previously written short story and turned it into her first novel, the bestselling Interview with the Vampire. She based her vampires on Gloria Holden's character in the film Dracula's Daughter: She established what vampires were to her: elegant, tragic, sensitive people, not the blood-thirsty creatures.

After completing the novel and following many rejections from publishers, Rice developed obsessive-compulsive disorder (OCD). She became obsessed with germs, thinking that she contaminated everything she touched, engaged in frequent and obsessive hand washing and obsessively checked locks on windows and doors. After a year of therapy for her OCD, Rice attended the Squaw Valley Writer's Conference at Squaw Valley, where she met her future literary agent. In October 1974, he sold the publishing rights to Interview with the Vampire for a $12,000. Interview with the Vampire was published in May 1976.

Following the negative reviews from critics to Interview with the Vampire, Rice left mystery fiction and wrote two historical novels, The Feast of All Saints and Cry to Heaven. The author also created a series of four novels under the pseudonym A. N. Roquelaure. Rice revealed the true authorship of Sleeping Beauty novels only in the 1990s.

In 1985, Rice returned to the vampire genre with The Vampire Lestat. Сompared to the book Interview with the Vampire, reaction to the novel The Vampire Lestat - both from critics and from readers - was more positive, and the first hardcover edition of the book sold 75,000 copies. In 1988, The Queen of the Damned was given an initial hardcover printing of 405,000 copies. The novel reached the #1 spot on The New York Times Best Seller list, staying on the list for more than four months.

The Vampire Chronicles became a substantial commercial success, so Anne Rice continued to work on it, and in 2016 she released the 13th book, the novel Prince Lestat and the Realms of Atlantis. At the same time, Rice wrote Lives of the Mayfair Witches trilogy, two books about Christ the Lord and several books of different genres.

Anne Rice’s Vampire Chronicles are the most popular books, which have had both great mainstream and cult followings. Besides, Rice's novels are popular among many members of the LGBT community, some of whom have perceived her vampire characters as allegorical symbols of isolation and social alienation. Rice herself commented that from the beginning, she did not set out to involve a sustained gay allegory, but that was what they perceived. She left readers the right to truth in the eye of the beholder.

Many of Rice novels have been adapted into movies and comic books. In 1994, Neil Jordan directed the first motion picture adaptation of Interview with the Vampire, based on Rice's own screenplay. The movie starred Tom Cruise as Lestat, Brad Pitt as the guilt-ridden Louis, and a young Kirsten Dunst in her breakout role as the deceitful child vampire Claudia.

A second film adaptation, Queen of the Damned, was released in 2002, starring Stuart Townsend as the vampire Lestat and singer Aaliyah as Akasha. The movie combined plot points from both the novel The Queen of the Damned, as well as from The Vampire Lestat. Produced on a budget of $35 million, the film recouped only $30 million at the U.S. box office. On her Facebook page, Rice distanced herself from the film and has stated that she feels the filmmakers “mutilated” her work in adapting the novel.

At the beginning of 2010, a film adaptation of the first book Christ the Lord: Out of Egypt was reported to be in the early stages of development. It was screened in 2016 but did not succeed; however, some critics were satisfied.

Besides films, in 2005, the musical Lestat, based on Rice's Vampire Chronicles books, opened at the Palace Theatre on Broadway after having its world premiere in San Francisco in December 2005. With music by Elton John, it was the inaugural production of the newly established Warner Brothers Theatre Ventures. Despite Rice's own overwhelming approval and praise, the show received disappointing attendance and mostly negative reviews from critics. Lestat closed a month later on May 2006.

Several of Anne Rice's novels have been adapted into comic books, graphic novel, and manga.

Anne Rice met his future husband Stan Rice when she was sixteen on the journalistic class at school, and in 1961 the couple married. She was twenty years old, and her husband only would be 19 in a few weeks.

Their daughter Michele was born to the couple on September 21, 1966, but after four years, she was diagnosed with acute granulocytic leukemia. Rice later described having a prophetic dream, months before Michele became ill, that her daughter was dying from “something wrong with her blood.” On August 5, 1972, Michele died at Stanford Children's Hospital in Palo Alto.

Rice's second baby Christopher was born in 1978. In mid-1979, Rice, an admitted alcoholic, and her husband, Stan Rice, quit drinking so their son would not have the life that she had as a child. Their son would become like his parents - a best-selling author and a poet. In 2002, Stan Rice died of brain cancer.

Anne Rice has a complicated relationship with Catholicism: in her youth, the writer considered herself an atheist and returned to Catholicism only in 1998. However, many Catholic dogmas the woman still did not accept. Rice remained a supporter of feminist views, continued to support the LGBT community as well as abortion rights and birth control.

In 2010, Rice publicly announced her disdain for the current state of Christianity on her Facebook page, stating that she quitted being a Christian, but her faith in Christ is central to her life. She also added that it is just impossible for her to “belong” to this quarrelsome, hostile, disputatious, and deservedly infamous group.

Now Anne Rice does not stop delighting her fans with her new books - in October 2018, another novel of the Vampire Chronicles was published - Blood Communion: A Tale of Prince Lestat. The TV series adaptation also moved off the dead center.

On July 17, 2018, Anne Rice via Instagram, where she also regularly shared with her photos, posted the official news about her upcoming Vampire Chronicles that Hulu channel landed the series.

Perhaps Anne’s fans will get lucky, and the shooting will go at a quick pace, then, lovers of Vampire Chronicles will be able to watch the series in 2019.