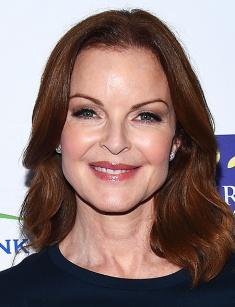 Marcia Cross became famous starring in the American soap operas. The actress has mainly portrayed spiteful heroines with an uneasy fate, but at the same time, her characters were not faceless or dull. For this reason, the producers of the series Melrose Place saw Marcia as an ideal candidate for the role of Dr. Kimberly Shaw, which made the actress famous. Later, she already played the title character, Bree Van de Kamp, in the TV series Desperate Housewives, after which Cross enjoyed a huge surge in popularity.

Marcia Anne Cross was born on March 25, 1962, in Marlborough, Massachusetts. Her father, Mark Cross, worked as a personnel manager, and mother Janet Cross was a teacher. Marcia and her two siblings, Susan and Ellen, were raised Catholic.

Marcia was the middle one of three sisters and was fascinated by acting in school. In the sixth grade, she played in the production of The Witch of Blackbird Pond. The girl’s teacher saw her abilities, began to encourage the development of the student’s acting talent and persuaded her to continue education.

After graduating from high school in 1980, Marcia left for New York City and entered the Juilliard School, one of the largest performing arts conservatories in America. Four years later, she received a bachelor's degree and began to attend auditions.

Soon the novice actress managed to make it into the world of television. In 1984, she was cast in the role of Liz Correll in the long-running CBS project The Edge of Night. The series aired on American TV since 1956 and became a springboard for the stars such as John Travolta, Julianne Moore, Kate Capshaw, Mark Rydell, etc.

When the project was closed, Cross moved to Los Angeles in search of new opportunities to be closer to the world of cinema. The young woman played the role of Victoria Willis in the detective series Brass (1985). The next project was a reason enough to feel great joy because Marcia landed the first leading role in the series Pros & Cons (1986), portraying Lynn Erskine.

The same year, Marcia was invited to the popular TV drama One Life to Live, which was a continuation of the famous series Dallas. The actress’s filmography sometimes included feature films, for example, the role of Ruth Fielding in Curtis Hanson's thriller Bad Influence (1990).

In 1992, the actress, who was already tired of bit parts, finally was lucky. Marcia was cast in the famous prime-time project Melrose Place. Cross’s heroine, Dr. Kimberly Shaw, appeared in the 11th episode of the first season and immediately attracted the attention of viewers with the rich, auburn-red hair color and eccentric behavior.

Kim is the mistress of the protagonist, Michael Mancini, and faces incredible events, including adultery, kidnapping, a terrible car accident, and coma, after which the woman develops a mental disorder, a split personality. Mad Kimberly begins to revenge, blows up the mansion on Melrose Place, and becomes a kidnap victim. In the end, Marcia’s heroine dies of a brain disease, having brilliantly played in five seasons.

The success of the series Melrose Place in the 90s was incredible, and the project was broadcast in dozens of countries all over the world. No wonder that it was a turning point in the career of many actors, including Marcia Cross. Having played mainly bit parts in episodes, the actress became a real TV star after the role of Kimberly Shaw.

However, after a successful project, her career did not immediately take off. There was a period of some creative break that Cross used for personal development. In 1997, she entered Antioch University Los Angeles to study psychology. Meanwhile, Marcia continued to film. She played in episodes of several series (Ned & Stacey, Touched by an Angel, The Outer Limits, Boy Meets World).

In 2003, the actress earned a master's degree in psychology and was invited to a new project, Everwood. Cross played Dr. Linda Abbott for 18 episodes. The next step in her acting career was the starring role in the series Desperate Housewives.

The story focuses on the life of four American homemakers living in a prestigious area on Wisteria Lane. Marcia Cross’s heroine, Bree Van de Kamp, is obsessed with perfectionism. She is an excellent mistress and cook, always well-groomed and smiling. Her husband is a successful businessman, and the children are smart and beautiful. According to Bree, she managed to create an ideal family. However, soon the perfect relationship starts to deteriorate because it turns out that the husband is a pervert, the son is gay, and the daughter is the future single mother. Bree will have to cope with it and find happiness in her life.

The series aired on American TV and was a huge success for eight seasons from 2004 to 2010. Marcia Cross was nominated three times for the prestigious Golden Globe Award for her role in Desperate Housewives.

After the series, Marcia Cross and her partners on the set, Eva Longoria, Felicity Huffman, and Teri Hatcher, turned into superstars and style icons. Viewers suspected more than once that Marcia underwent plastic surgery, but the actress said that the secret of her beauty was a healthy diet and sport.

Since 1985, Marcia was the long-time companion of American stage and screen actor Richard Jordan, who was 25 years older. The man died in 1993 from a brain tumor.

There was no information about the personal lives of the actress for a long time. But in 2006, fans were pleased to hear the unexpected news that Marcia and stockbroker Tom Mahoney celebrated the wedding. In 2007, the couple had twin daughters Eden and Savannah after Cross had undergone in vitro fertilization. Pregnancy and childbirth did not affect the perfect figure of the actress (her height is 5.70 ft. (174 cm), and the weight is 147.71 lbs. (67 kg)).

In 2010, the actress’s husband was diagnosed with cancer, but the man recovered. In September 2018, Marcia told fans about a similar disease and posted the photo depicting her without hair on Instagram. Later, the actress wrote that she achieved disease remission, but the road to recovery was difficult.

Nowadays, the actress is recovering from a severe illness, and her acting schedule is not as tight as in her youth.

Judging by the sources, Marcia Cross is filming in the TV projects Youth & Consequences and This Close.

Marcia Cross has a net worth of $30 million.