Julianne Moore is an American actress whose talent has been appreciated by many critics. The actress has won the Academy Award, Emmy, Golden Globe Award, BAFTA, and Screen Actors Guild Award.

Due to the nature of the father’s job, the family had to move frequently in America and all over the globe. Consequently, the children had to change schools often. When Julie finished school, she studied in Frankfurt, Germany, in an American college attached to the US Embassy. In 1979, she returned to her homeland and entered Boston University, School of Theater, that she finished four years later as a Bachelor of Fine Arts.

As the young woman finished her studies, she went to New York, got hired as a waitress, and began to take part in all castings and competitions possible. The tiny actress (her height is 160 cm.) caught directors’ attention. To obtain the official status of an actress, Julie registered in the Screen Actors Guild. There was a fun incident there: the young actress’s namesake had already been registered, so Julia created a pseudonym for herself by joining two names and taking her grandfather’s second name. Thus, she became Julianne Moore.

This change confused fans who tried to understand the actress’s biography: from time to time, they believe Julianna is related to another famous person, Demi Moore. In fact, the actresses are neither sisters nor cousins, they have no relations at all, and the second name “Moore” is quite popular in Hollywood. Roger Moore is also the women’s namesake.

Julianna practiced acting in Broadway and then on TV in the soap opera “As the World Turns” where she participated for three years. In the 1980s, her professional career was marked with TV projects only. However, it was not in vain. For instance, Moore won Daytime Emmy Award as the best actress in 1983.

In 1990, Julianna appeared in a movie for the first time: it was a minor episodic role in teenagers’ horror story “Tales from the Darkside: The Movie”. The secondary roles in quite popular movies followed: the thriller “The Hand That Rocks the Cradle,” melodramatic thriller “Body of Evidence” starring Madonna, the Oscar-winning detective “The Fugitive,” the comedy “Nine Months,” thriller “Assassins,” and many others. Actually, the actress accepted all offers in that period.

The actress’s career took off after she participated in Steven Spielberg’s fantastic action movie “The Lost World: Jurassic Park” in 1997. It is peculiar that the famous director offered Moore the role of doctor Sarah Harding without auditions and casting because he liked her acting in “The Fugitive.”

In 1999, Moore starred in 5 movies among which the screen adaptation of Graham Greene’s “The End of the Affair” and social drama “Magnolia” stood out. These works brought new Oscar nominations and the Golden Globe.

Another movie hit was “Hannibal,” the sequel of the scandalous thriller “The Silence of the Lambs.” Moore changed another famous actress Jodie Foster and played the role of Clarice Starling in this project. In the same year, the fantastic comedy “Evolution” with David Duchovny and Orlando Jones came out.

In 2002, Julianne Moore was nominated for the Academy Award twice as the best actress and best supporting actress: for the leading part of Cathy Whitaker in the drama “Far from Heaven” and the secondary role of Laura Brown in the unusual drama “The Hours.”

In 2004, Julianne Moore and Pierce Brosnan starred in the comedy “Laws of Attraction” that told the story of two divorce lawyers.

Later on, the roles in the fantastic thriller “The Forgotten,” tragicomedy “The Kids Are All Right,” drama “A Single Man,” and romantic comedy “The English Teacher” are particularly remarkable. For the role in the screen adaptation of Lisa Genova’s “Still Alice,” Julianne Moor finally won her long-awaited Academy Award for Best Actress. This project also brought the Screen Actors Guild Award, BAFTA, the Golden Globe, and National Board of Review Award.

In 2014, the actress starred in the satiric thriller “Map to the Stars.” The list of Julianne’s brightest works also included the adventure fantasy “Seventh Son” and the sequel of the anti-utopia “The Hunger Games: Mockingjay.”

In 2015, Julianne played the major role in the drama “Freeheld.” The actress’s character is a terminally ill detective and lieutenant who tries to provide the love of her life with the police pension. The problem is that the dying woman’s partner is also a woman, and the law does not protect such couples.

In 1986, Julianne Moore married for the first time: it was the series actor John Gould Rubin. The couple lived together for 9 years, yet the chain of scandals and several months of complicated court processes led to they divorced.

In 1996, the actress and the director Bart Freundlich who had been acquainted before started the relationship when the movie “The Myth of Fingerprints” set. At first, they lived in a civil marriage and married officially in 2003. Julianne and her husband have two children: the son Caleb (born 1997) and the daughter Liv Helen who is five years younger than her brother.

The actress regularly posts photos on the official Instagram page. The website confirmed her identity. The actress posts daily routine pictures, photos taken during trips, vacations, and meetings with her friends. 357 thousand followers are subscribed to Moore’s page.

In 2016, the actress appeared at the prestigious Oscar ceremony. However, she was not a nominee: she awarded the winners with the prize.

In May 2017, the premiere of the social drama “Wonderstruck” took place at the Cannes Film Festival. The main characters of the movie are small deaf travelers. The movie is based on Brian Selznick’s novel under the same title. The main roles were played by the children; Julianne Moore played the grown-up main character.

In September 2017, the premiere of the comedy action movie “Kingsman: The Golden Circle” tool place. It is the sequel of the popular semi-parody movie about spies. In the new movie, they learn that the English secret organization is not the only one in the world: they have to face their American colleagues who work under the similar name, “Statesman.” Julianne played Poppy in this movie.

At the end of 2017, another premiere was marked – the movie “Suburbicon.” The movie combined comedy, mystery, and crime drama characteristics and told the story of an idyllic town in the 1950s where the American dream came true. The story begins with an enigmatic murder that demonstrates the hidden side of the idyll. 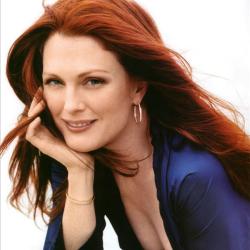