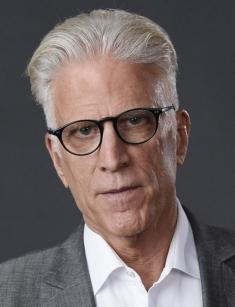 Ted Danson is an American actor, who has prestigious Primetime Emmy Awards and Golden Globe Awards. The image of the hero of the sitcom Cheers made the artist popular. Starting his career with the embodiment of comedy characters, Ted Danson was able to achieve recognition as a dramatic actor. The modern generation knows him from TV projects Curb Your Enthusiasm and The Good Place.

The artist's real name is Edward Bridge Danson. The boy was born in San Diego, California, on December 29, 1947. His unusual appearance is a tribute to the gene pool of the ancestors from Britain and Scotland. The Roman numeral III is often put next to the name of the artist. It is because the grandfather and father had the same name.

Ted's parent was an archaeologist and a museum director. The child spent his childhood in a town Flagstaff in Arizona, near the Navajo reservation. In 1961, the boy was sent to the Kent School in San Diego, where he became a local star quickly due to his high growth. He was accepted to the basketball team, where Danson demonstrated his success.

Ted was interested in drama and theater after a while. Part of the motivation was a romantic interest in a girl, an aspiring actress. But later it turned out, that she was of less interest than the theater to the young man.

Ted went to Stanford University, where he studied drama. Later, the future artist transferred to Carnegie Mellon University in Pittsburgh and received his Bachelor of Fine Arts degree in 1972.

Danson's creative biography originates from work on the series Somerset. He was invited to the contract work for the filming of a melodramatic project, which was broadcast on television in the daytime. At the same time, the artist began to star in commercials.

One of the first projects that made him recognizable was the advertising campaign of the toilet water "Aramis." At first, Danson was considered as a guest artist, who could play in the series. In the '70-'80s, the actor starred in the projects Laverne & Shirley, Family, Magnum, P.I. and others.

The sitcom Cheers, which was released in 1982, attracted the attention of the public to Danson. He played a former basketball player in the sitcom. The project had a long life on the screen and was broadcast until 1993. He received Golden Globe Awards in the category Best Actor two times for the embodiment of the image of Ted and he received Primetime Emmy Awards.

The actor managed to go beyond the usual role, which rarely happens with the performers of comedy roles. The first film with his participation was the film Something About Amelia. The picture described the fate of the family, which collapsed after the tragic circumstances associated with incest.

Upon completion of the project Cheers, Ted was the hero of the series Ink, produced by CBS. He worked together with his wife, Mary Steenburgen on the site. The couple was invited to star in the series Gulliver's Travels at the same time, which won considerable success with the audience.

The next project with the participation of Ted Danson was Becker. The serial film was loved by viewers and lasted for six seasons until 2004. The actor embodied himself in the series Curb Your Enthusiasm, starred in the project, Frasier. Danson also participated in the creation of the favorite cartoon The Simpsons, voicing the character Sam Malone in one of the episodes.

In 2006, the artist worked on the series Help Me Help You but the ratings of the project were low. A year later, he was invited to shoot in the drama Damages. Ted turned into a billionaire and a family man Arthur Frobisher on the screen. The most famous role of the artist in the feature film was the image in the movie Three Men and a Baby. Danson's partners at the site were Tom Selleck and Steve Guttenberg. The trio continued to collaborate on the sequel.

The audience remembers the tall, handsome actor in the movies The Onion Field, Made in America, Saving Private Ryan, Cousins and other films, which were released in the 2000s. 2008 was marked for Danson the shooting in the movie The Human Contract. In 2009, the broadcast of the series began, the popularity of which could be compared with the success of the sitcom Cheers. The project was called Bored to Death. The company of the artist on the site were the actors Zach Galifianakis and Jason Schwartzman.

Ted Danson was nominated for Primetime Emmy Awards 14 times over 30 years of his creative biography and was the winner of the prize two times. The artist was nominated for Golden Globe Awards 10 times and was its winner three times. There is now a star, which is dedicated to Danson on the Hollywood Walk of Fame in America.

The first marriage of Ted Danson was in 1970. The actor lived with his wife Randy for 25 years. His second wife was Casey Coates in 1977. The life of the star was complex during this period: Casey was paralyzed after the birth of their first child. Ted took care of her and tried to do everything possible to make her feel good. The couple adopted the second child.

In 1993, the news of the couple's divorce was as a bolt from the blue over Hollywood. Parting with an ex-lover cost the actor $ 25 million. In the period, while there was a divorce process, the paparazzi discussed the romantic relationship that originated between Ted Danson and Whoopi Goldberg. But the actor inadvertently mentioned it on one of the TV shows; it undermined the reputation of the artist and caused anger of the public.

The third wife of Danson was Mary Steenburgen. The marriage was in 1995. The artist was the stepfather of Mary' two children, born in the marriage with her ex-husband Malcolm McDowell.

Danson repeatedly mentioned that he adheres to a vegetarian diet but sometimes eats fish. It does not affect his figure: Ted's height is 189 cm and the weight fluctuates slightly. The worldview of the actor is formed due to the awareness of the importance of environmental care.

Ted and his current wife are actively engaged in educational activities and actions against environmental pollution. Danson donated more than $500 thousand for the protection of nature. The actor is also a member of the American Oceans Campaigns and is passionate about the security of the Oceans and the risk of global warming.

The actor regularly adds new projects to his filmography. In 2019, he continues to participate in the filming of the series The Good Place. Fans of the artist can follow his activities thanks to the account of the star on "Instagram." Ted regularly publishes new photos, accompanied by his curious comments. Ted Danson holds an estimated net worth of $60 Million.

He remains an incredibly energetic and ambitious man as in early life. The artist's passion is enough not only for activities within the framework of cinema but also for other areas of interest. Now Ted is engaged in the manufacture of environmentally friendly production of sellotape named Danson's Best.