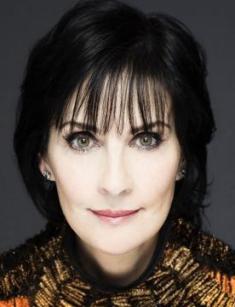 Her music is often called stress-relieving and mysterious, and fans view Enya as a fairy. The artist is famous for her Gaelic tunes presented on 20th-century CDs; millions of copies have been sold. Enya has never given a single concert, and music lovers all over the globe continue to follow the most enigmatic Irish star.

Enya Patricia Brennan was born on May 17, 1961, in Gweedore, Ireland. This place is known as the cradle of the country’s culture: folk songs, dances, and traditions. People deeply respect their past and speak Gaelic there.

There were nine kids in the family; the would-be singer was the sixth child of Máire and Leo. Her name in Gaelic was “Eithne” and sounded “Enya”: the combination “th” was silent. “Ní Bhraonáin” meant “the daughter of Brennan”. Later, the artist took the English version of the name to avoid problems with pronunciation.

The love of art was instilled in the family. When the father was a teenager, he was interested in church music; later, he created Celtic ballads. The mother taught music in a middle school. The parents also encouraged their children to develop their vocal abilities and play instruments. Enya started playing the piano and liked classics.

The Brennans were like the Irish version of the Jackson family. In 1968, the singer’s great uncles and elder brothers founded the group an Clann as Dobhair; its name was transformed into Clannad due to translation and pronunciation issues. The relatives performed at Leo Brennan’s tavern first and then earned their fame as Celtic folk, rock, and new-age musicians. Enya was only seven when the band was organized. As soon as the girl graduated from school, she joined the team; her sister Moya was the group leader and played the harp.

In 1980-1982, the woman participated in the family group: she played the keyboard and sang. Later, she decided to begin her solo career.

The young talent did not attend noisy parties, date guys, or get herself into nasty affairs like many teenagers; she met her friends occasionally and led a calm life. As the singer told journalists later, music appeared in her life early and grabbed 100% of her attention.

As a member of Clannad, Enya met its manager Nicky Ryan. After his mentee group had a European tour, he left, and the young woman followed him in Dublin to prepare for her solo career. Nicky was her agent, and his wife Roma wrote songs.

Enya often emphasized she owed 2/3 of her success to the Ryan spouses. In 1984, Nicky got the order to create music for the new full-length movie produced by David Puttnam. He liked to work with the Irish singer and helped her collaborate with BBC. The next project lasted for ten months. The audience loved the sound in the documentary series The Celts so much that the channel presented the disc with the music. Its title was short and simple: Enya.

Later, Warner Brothers released the remastered album with the new name, The Celts; the musician signed a contract with the company in 1987. The CEO Rob Dickins was inspired by the vocal that seemed to be out of the commercial mainstream. He decided to make the Gaelic girl a new international star.

The album Watermark brought Enya recognition all over the world. The supernatural, magic, and etheric vocal, elaborate parties, music instrument combination, and folk tunes blew charts in many countries. These tracks were so different from regular 1980s songs that some critics believed that the new age glitter and folk waves were created by drugs.

The artist said she took painkillers because of her leg injury when the final album was mastered. However, this fact had no influence on the creation process. The following masterpieces proved that; today, Enya’s manner is recognized worldwide.

20 months later, the album Shepherd Moons came out; it spent 199 weeks (almost four years) in Billboard. The singer recorded a dozen tracks for it. In 2000, the song “Only Time” topped charts all over the world, and the sales of A Day Without Rain increased dramatically after several TV channels used this single in its reports about the tragic events of September 11th.

Enya does not present new works often: in 1987-2015, only nine albums came out. The gap between And Winter Came and Dark Sky Island was seven years. Dark Sky Island appeared in two versions: the regular one and the deluxe edition with several music videos and bonus tracks.

The woman polishes every song and records vocal parties and complex arrangements. For this reason, she never gives concerts: some songs require choirs and dozens of musicians who play various instruments. Enya is thorough and sincere when it comes to work: her songs are the result of

Movie makers love Enya’s tracks. She has created the soundtracks for the comedy Green Card with Gérard Depardieu and Andie MacDowell, the melodrama L.A. Story starring Steve Martin, the drama Far and Away with Nicole Kidman and Tom Cruise, and Martin Scorsese’s The Age of Innocence.

The song “May It Be” is probably the most famous song of Enya; it was co-created with the Ryans and the Hollywood composer Howard Shore. The song appeared in the first part of the popular trilogy, The Lord of the Rings: The Fellowship of the Ring. Enya won the Golden Globe and several World Music Awards for it; she was nominated for the Academy Award, too.

There is little information about the artist’s private life. She is not a public person and avoids crowded social events. The woman often visits her home, Gweedore, and family. Enya is not married and has no children.

Just like any fairy, she lives in an old Dublin castle. The story of the building is exciting: it was erected in 1840 by the coronation of Queen Victoria. The castle burnt down in 1928, but it was restored to the last detail and transformed into a tourist attraction in 1995. Two years later, the singer bought it and gave it the name “Manderley”, like the imaginary house in Daphne du Maurier’s novel Rebecca, the artist’s favorite book.

Today, the musician continues to lead a reclusive life. There is no information about her artistic plans or personal relationships.