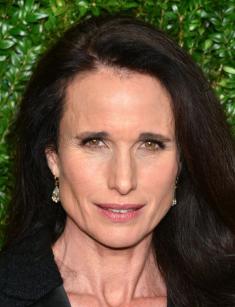 Andie MacDowell is an American model and actress who earned her fame for the movie Groundhog Day. She won the Independent Spirit Award for Best Female Lead.

The would-be actress was born on April 21, 1958, in Gaffney, South Carolina. She has a mixed origin: Scottish, Irish, Welsh, and French.

The girl had an elder sister, Beverly (born in 1954) and a younger brother, Willard (born in 1961). The father worked as a lumber executive, and the mother taught music. They divorced when Andie turned six; the kids stayed with the mother.

Andie enrolled at a college but had to quit two years later because of material hardships. The young woman got hired at a Stage Door restaurant; she also used to work part-time in a clothes store.

At 20, Andie left her town for New York and signed a contract with Elite Model Management. Pretty and slim (Andie’s height was 5.68 feet or 173 cm., and her weight was 145.5 lbs. or 66 kg.), the young woman found a place for herself in the industry. She participated in fashion shows in Paris and collaborated with Yves Saint Laurent, Vassarette, Armani perfume, Sabeth-Row, Mink International, Anne Klein, Bill Blass. Andie’s photos frequently appeared on covers of Vogue and Glamor. In 1986, MacDowell became a spokesperson for L'Oreal’s Revitalift series.

In 1984, Andie debuted with the lead role in the adventure movie Greystoke: The Legend of Tarzan, Lord of the Apes; Ralph Richardson and Christopher Lambert were her stage partners. The success inspired the woman, and she decided to study acting without leaving commercial shoots.

The mid-1980s were marked with three more projects: Spenser: For Hire, St. Elmo's Fire, and The Secret of the Sahara. Soon, the artist was invited to Steven Soderbergh’s Sex, Lies, and Videotape to play the main character, Ann. The drama about family relationships brought its creators several prestigious prizes. MacDowell was nominated for the Golden Globe and won the Los Angeles Film Critics Association Award for Best Actress and Independent Spirit Award for Best Female Lead.

In 1990, Andie had the lead part in Peter Weir’s Green Card starring Gérard Depardieu. As the story runs, the French man needs to marry an American citizen to receive the green card and a job; the young American woman wants an apartment in a luxurious New York skyscraper where only spouses are allowed. As the young people have a marriage of convenience, they have to behave like newlyweds for strict immigration officers.

The comedy brought the artist another Golden Globe nomination.

Soon, MacDowell participated in Hudson Hawk with Bruce Willis and Women & Men 2: In Love There Are No Rules. In 1991, she co-starred with John Malkovich in The Object of Beauty.

The iconic 1993 comedy Groundhog Day by Harold Ramis brought the actress international recognition. Andie MacDowell and Bill Murray played Phil and Rita who eventually fall in love with each other. The box office in the USA was $70 million.

In 1999, the comedy about the Hollywood life The Muse came out; Albert Brooks and Sharon Stone took part in the project. The next year, Andie was invited to the war adventure drama Harrison's Flowers about a journalist investigating a conflict in Yugoslavia. When the man suddenly disappears in Eastern Europe, his wife Sarah is going to find him.

2001 brought the love comedy Town & Country with Diane Keaton, Warren Beatty, Garry Shandling, and Nastassja Kinski. The same year, the drama Dinner with Friends was premiered; it was based on the Pulitzer-Prize-winning play under the same title.

In 2002, the artist participated in the Italian drama Ginostra about the Sicilian mafia she personified an FBI agent’s wife. In the German and British comedy Crush, Andie personified a school headmaster who found her happiness with a young lover.

The mid-2000s were marked with low-budget projects on TV: Beauty Shop, The Last Sign, Riding the Bus with My Sister, Tara Road, and V Graham Norton.

In 2009, MacDowell appeared in the comedy The Six Wives of Henry Lefay; the next year was marked with At Risk and The Front. In the thriller As Good as Dead, the woman personified the wife of a kidnapped priest who had to investigate the crime and find her husband independently.

In 2012, the series Jane by Design with Andie MacDowell began; soon, she was invited to Cedar Cove. In 2015, the actress participated in an episode of the comedy Magic Mike XXL about strippers’ lives.

In the early 1980s, Andie MacDowell met her first husband, Paul Qualley, thanks to modeling; they married in 1986. Three children were born in this family: the son Justin (1986) and the daughters Rainey (1989) and Margaret (1995). The spouses lived in a ranch in Montana. They broke up in 1999. Journalists believed it happened because of the actress’s old romance with Bruce Willis that was revealed ten years later.

Andie’s school friend, the entrepreneur Rhett Hartzog, became her second husband in 2001; they spent three years together. MacDowell’s friend Kevin Geagan could have become her next partner, but the artist decided not to marry again.

The actress’s life is full of harmony: she travels, does yoga, and goes climbing.

In 2017, Andie MacDowell had a secondary role in Joseph Kosinski’s social drama Only the Brave. The movie was made in memory of 19 firefighters who died during the summer fire in Arizona in 2013.