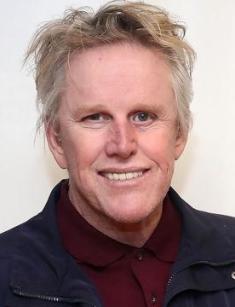 Gary Busey is known as a minor actor. His unusual appearance is the result of his careless attitude to safe riding a motorcycle. It turned a pretty young man into a hostage of militants and criminal dramas. The star of the movie Lethal Weapon and Gone continues to star, despite his advanced age.

William Gary Busey was born in the family of the housewife Sadie Virginia and the design engineer Delmer Lloyd Busey in Baytown, Texas on June 29, 1944.

He graduated from Nathan Hale High School, Tulsa, Oklahoma in 1962. He attended Coffeyville Community college, Kansas. Busey established himself as a hardy football player and he received a scholarship at Pittsburg State University in Pittsburg, Kansas.

He became interested in acting when he was a student. The young man attended acting classes, got acquainted with the works of the greatest actors in Hollywood of the 1920s: Harry Lewis, Ricardo Montalban, James Lanphier and others. He liked Westerns with the participation of Clint Eastwood. Busey transferred to Oklahoma State University but he studied only a year, he was involved in show business.

Gary's career began with The Rubber Band, where he was a drummer. He appears on several Leon Russell's recordings, credited as playing drums under the names "Teddy Jack Eddy."

He had his nickname Busey during the shoot in the Oklahoma comedy show The Uncanny Film Festival and Camp Meeting. The aspiring actor had to play a militant character, an American hero. He had to come up with the name on his own. Gary could not choose a suitable option. When he told Gailard Sartain his character needed a name, Sartain replied:

Busey got the role in the movie Wild in the Streets (1968), playing in the band Carp. In 1972, the young man starred in the Western The Magnificent Seven Ride!. The TV star fulfilled his childhood dream. He starred in a tape Thunderbolt and Lightfoot (1974) with Clint Eastwood two years later.

The TV star became very famous after the release of such tapes as Insignificance (1985), Eye of the Tiger (1986), Lethal Weapon (1987). In 1988, Gary almost died in a car crash. His disfigured appearance let him take part only in criminal movies.

Busey played in the action movie Point Break (1991) along with Keanu Reeves. He played in the Drop Zone (1994) with Wesley Snipes and he played in Man With A Gun (1995) together with Michael Madsen. Later, they appeared in leading roles in the tape Rough Draft (1998).

Busey`s filmography was implemented with the series. The most important project was Yesenin (2005) with Sergey Bezrukov in the title role of the Russian poet-bully. The actor played the ex-husband of Isadora Duncan, the American actress Sean Young played her.

The celebrity continues to act in tapes, although Gary Busey is over 70 years. In 2018, he can be seen in such tapes as Camp Manna and The Last Sharknado: It's About Time.

The couple divorced, they lived together for 22 years. He married the actress Tracy Hutchinson. In 1994, their daughter Alectra was born.

In 1996, Busey tied the knot with Tiani Warden. The actor was arrested for domestic violence a year after their wedding. Gary tried to break up an unhappy relationship and filed for divorce in 1998 but he took the document later. Finally, the marriage broke up in 2001.

Nowadays, Busey builds a family with Steffanie Sampson. On February 23, 2010, the couple had a son, Luke Sampson Busey. Steffanie and Gary are not married officially.

Gary Busey almost died several times not only in the movies but in real life. The celebrity's face is asymmetrical, one eye is larger than the other one and his mouth is in a twisted smile. It happened on December 4, 1988, when the performer rode a motorcycle without a helmet.

Busey said in an interview with The Ellen DeGeneres Show that he clamped the front brake firmly, flew over the steering wheel and hit his head on the curb. The man's skull "split like a watermelon" and the doctors spent long hours, trying to save the life of the famous patient. Some editions claim that Busey lost his eye in the accident and he has the implant there but the eye looks very "alive" on the photo.

His face is the source of income. Busey had several plastic surgeries. But it only worsened the situation. Different size eyes, asymmetrical mouth, high growth of 6 feet (184 cm) became Gary`s feature over time.

Gary took painkillers for a long time and became addicted after the crash. He used cocaine. On May 3, 1995, Busey overdosed and the actor promised not to touch the prohibited substances from that moment. Difficulties built the character of the celebrity and he was involved in religion. In 1996, Busey announced:

"Hollywood, I'm proud to be a Christian. Now I can be myself."

In 1997, Busey was undergoing surgery to remove tumors in the area of the nose.

Nowadays, the TV star is focused on Jake's success. In January, the male part of Busey`s family attended the premiere of the tape Dead Ant, in which Jake starred. Gary plans only one project, the drama Rabere. Gary Busey is an American tape and stage actor who has a net worth of $500,000.

Busey writes books. In January 2019, he presented his book "Buseyisms," it is an autobiographical story of the rules of life. The statement "BIBLE – Basic Instruction Before Leaving Earth" is written on the cover.