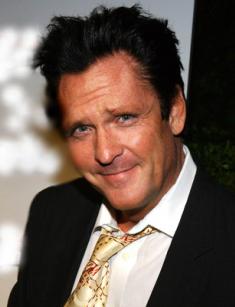 Michael Madsen has been an actor for more than 30 years; he participated in more than 170 movies including the blockbusters Kill Bill, Sin City, Reservoir Dogs, The Hateful Eight, and others. He is one of the favorite artists of the movie master Quentin Tarantino.

Michael Søren Madsen was born on September 25, 1958, in Chicago, Illinois. Michael’s grandparents from the father’s side came from Denmark; the mother had English, German, Irish, Indian, and Scottish roots.

The mother, Elaine, and the father, Calvin, divorced in the 1960s. The woman left her financial career to devote herself to art: she worked as a director and scriptwriter. Michael’s elder sister, Cheryl, owns a restaurant in Wisconsin. Virginia Madsen, an actress and the nominee of the Academy Award and the Golden Globe, is related to him: she is his younger sister.

Suddenly, Madsen discovered his interest in poetry; that hobby helped him amuse himself as he was serving his sentence. Later, when Michael was a famous actor, he confessed that every line was truthful, and each poem was based on a true story: the teen wrote only what he experienced personally, so his texts made a diary to be read between the lines.

When Michael was released, he did not quit to steal; however, he was a cautious thief who did not want to be caught by the police anymore. To earn his living, the young man worked as a firefighter, car mechanic, house painter, ambulance assistant, and night-watched in a zoo.

An article about Of Mice and Men based on John Steinbeck’s novel changed Madsen’s life dramatically. The play was staged at the Steppenwolf Theatre Company; John Malkovich personified Lennie who destroyed everything precious for him due to his stupidity.

Madsen saw himself in Lennie: tall, aggressive, and lonely. He saw the play five times and decided to make a confession to John Malkovich in a letter. As Michael guesstimated, he could be an actor and would leave his internal demons on the stage to surround himself by angels in real life.

Malkovich replied to the touching letter and supported the teenager; he confirmed that acting was a way to find a better self. Thus, Madsen was determined to appear in front of cameras.

In 1977, Madsen moved to Los Angeles, California. He attended acting classes and auditioned for various projects. However, the first decade of his career brought only secondary roles in the series Cagney & Lacey, The Hitchhiker, Miami Vice, and Crime Story.

In the 1990s, the improvement in the American’s career started. He played the lead role of a police officer, Cliff Burden, in the thriller To Kill For and a saxophonist, Morris Poole, in the drama Almost Blue. At the same period, Madsen met Quentin Tarantino who was looking for actors for his debuting movie Reservoir Dogs (1992). The artist received the role of Mr. Blonde / Vic Vega. The audience loved him, and Tarantino wanted this character to participate in his next large project, Pulp Fiction (1994). However, Madsen was busy with the western Wyatt Earp (1994) and had to decline the offer. Vic’s brother, Vincent (John Travolta), appeared in Quentin’s movie.

The role of Mr. Blonde in the iconic American movie opened the road to big cinematography for Madsen. He collaborated with Alec Baldwin, Kim Basinger, and Jennifer Tilly in The Gateway (1994) and Al Pacino and Johnny Depp in Donnie Brasco (1997). Besides, the actor had the lead part in the series Vengeance Unlimited.

2005 was marked with the screen adaptation of the graphic novel Sin City; Robert Rodriguez directed the movie. Michael appeared in the chapter “That Yellow Bastard” along with Bruce Willis and Jessica Alba.

At the same period, the idea of Vincent and Vic’s collaboration in a new movie was discussed.

In 2007, Tarantino said that the movie Double V Vega would never be filmed due to the actors’ age and both characters’ deaths.

Soon, the actor created a movie about himself: Being Michael Madsen (2007). The title refers to the 1999 movie Being John Malkovich. It is not a biographical chronicle: as the comedy runs, Madsen is inventing how to revenge a tabloid journalist. Although critics’ reviews were positive, the artist mentioned he regretted he had made this movie.

Characters with guns, fighters for justice, or notorious criminals are Madsen’s stage types. Michael participated in Hell Ride (2009), The Killing Jar (2010), and The Hateful Eight (2015); the latter was the third work with Quentin Tarantino.

Georganne LaPiere, the half-sister of the singer Cher, became Michael’s first wife. At that time, the man was not an actor. The marriage did not last long.

In 1991, Madsen married Jeannine Bisignano. Perhaps, the couple did that because of the woman’s pregnancy: in 1990, their first child, Christian, was born; the second son, Max, was born in 1994. However, the kids could not prevent the actor from leaving the family: Jeannine and Michael split up in 1995.

In 1996, the artist married DeAnna Morgan, the ex-wife of the musician Brian Setzer. The spouses have three children: Hudson Lee (born 1995), Calvin (born 1997), and Luke Ray (born 2005). Sometimes, tabloids claim the man has a daughter Jessica, but her mother’s name is unknown.

The children would like to follow in their father’s footsteps and devote their lives to cinematography. Christian has appeared in several movies; others create scripts. However, Madsen is strongly against those choices; he sees his kids as doctors or lawyers.

In 2012, Michael Madsen was arrested for cruel treatment of his son; it was not specified which son it was. The father’s aggressive behavior was accidental: the actor came home early and caught his son smoking marihuana. Madsen spent several hours in a police cell; he was released on a $100 000 bail.

Michael shares the details about his private life and movie achievements on Instagram. In August 2018, he informed his fans that “official” pages in other social networks should not be trusted.

The artist is a great fan of Marilyn Monroe and often posts her pictures on his Instagram page.

In his spare time, the actor runs his business (he produces hot-dog sauces American Badass), does charity work, tries himself as a photographer, and continues to create poetry. Madsen’s eighth poetry book, Expecting Rain, came out in 2012.

Today, Madsen continues to collaborate with Quentin Tarantino; the movie Once Upon a Time in Hollywood is their recent work. The story is set when Charles Manson and his cult are operating and the actress Sharon Tate, the wife of the director Roman Polanski, is murdered. The premiere will take place in 2019.

The action movie Trading Paint where Madsen collaborated with his movie “brother” John Travolta and the drama Papa are among the actor’s recent works.