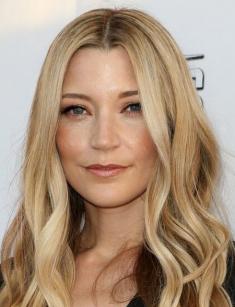 Sarah Roemer is an American actress who became famous for the films The Grudge 2, Fired Up, Hachi: A Dog's Tale. Sarah participates in projects of various genres, showing not only her beauty but also the dramatic talent. The actress is often confused with another celebrity, Blake Lively.

Sarah Roemer was born in San Diego, California, on August 28, 1984. She grew up in an ordinary family, and her biography was no different from the lives of thousands of American teenagers.

She lived such a quiet life until an accident changed everything. When Sarah was 15 years old, representatives of a modeling agency noticed the girl at a cafe and offered her a job. Then Sarah realized that she could achieve the American Dream.

Sarah began modeling for catalogs, and at the age of 17 moved to New York City. Her modeling career took off quickly. The beautiful lady appeared on the covers of popular fashion magazines, including Maxim, and also became the face of CCS catalogs.

The first successes inspired the girl. Like many American models, Sarah Roemer got an opportunity to film in series and full-length movies. Sarah Roemer did not miss her chance. Besides, it turned out that the model had excellent acting skills.

The aspiring actress made her debut in the film The Grudge 2. The horror film did not distinguish itself with an impressive plot or action, and critics gave mainly negative reviews, but the movie was a box office success. Sarah's debut was successful and provided an opportunity to develop her career. The girl got a bit part in the film Wristcutters: A Love Story and did not disappoint the producers again.

In 2007, she worked on the set of the film Disturbia, produced by Paramount Pictures. Critics appreciated Sarah’s acting, and the movie opened first at the box office. Sarah’s partner on the set was Shia LaBeouf. Their kiss was nominated for the MTV Movie Awards for Best Kiss in 2008.

The same year, Sarah Roemer starred in the short film Cutlass. 2008 was marked by her role in the film Asylum, which became significant in the filmography of the actress, made her famous, and attracted new fans.

In 2009, producers and directors already knew the name of Sarah Roemer, so the actress received several invitations to shoot in full-length top-grossing projects. They were the comedy Fired Up!, the melodrama Hachi: A Dog's Tale, and the drama Waking Madison.

Attractive Sarah did not also forget about her modeling career. She participated in the filming of the music video for "Come Back To Me" by David Cook, the famous American Idol winner.

The actress got a lot of new roles. In 2010 she appeared as the heroine of the thriller Locked In. It is interesting that in this project, Roemer portrayed one of the characters, and also worked as an assistant producer.

The next project with her participation was the film The Con Artist. At the same time, Sarah Roemer starred in the TV series The Event, which aired on NBC. The show was not successful, so a year later it was closed. The actress also participated in the project Hawaii Five-0.

In 2012, Sarah was invited to play in the series Daybreak. One year later, she accepted an offer to participate in the TV series Chosen. The action-thriller show aired from 2013 to 2014; then production was suspended.

In 2015, the actress got a role in the short film Girlfriend Game. At the same time, she was involved in the film TheApp', and one year later, Roemer appeared in the movie Manhattan Undying.

Sarah Roemer is happily married to Chad Michael Murray. He is also an actor, and as a creative person, Sarah easily found common ground with her boyfriend. The couple met in 2014. Murray had been married before. He made a marriage proposal to Sarah 5 months after they met, and the young people soon celebrated the wedding. In May 2015, the couple had their first son, and two years later, in 2017 a daughter was born.

Sarah lives with her husband and children in Los Angeles. She has pets: a spaniel named Dylan and a French bulldog, Clyde. The actress likes country music and the songs of David Bowie and Fiona Apple. Sarah keeps fit, doing sports. The woman is 5.61 ft. (171 cm) tall, and her weight is 119.05 lbs. (54 kg). The actress prefers windsurfing on vacation, and horse riding is also one of her hobbies.

The actress continues to film and often participants in TV projects. She is not so famous as other Hollywood stars, but Sarah managed to achieve her goal and has become a recognizable actress. In 2019, she will continue to work in the favorite sphere, but now Sarah Roemer pays a lot of attention to her family. The woman devotes much time to her kids and husband. Her Instagram page can prove it.

The actress posts photos of traveling, enjoying every moment in her life. She takes pleasure in being a mother. The pictures of their kids have replaced hot photos in a bikini and sexy covers of fashion magazines. The actress often posts pics that help fans to find out about her personal life, relatives, and pastime.

Sarah Roemer has a net worth of $2 million.