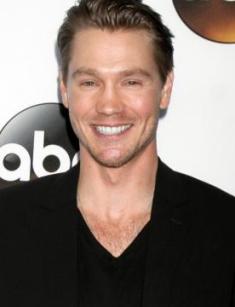 Chad Michael Murray is a famous American actor. The artist rose to fame after the release of the movies Freaky Friday, A Cinderella Story, and the TV series One Tree Hill. Nowadays, he regularly appears in new exciting projects, publishes a book, and brings up two children.

American actor Chad Michael Murray was born on August 24, 1981, in Buffalo. He grew up in a large family, which consisted of six children. He has brothers Rex, Nick, Brandon, Tyler, and sister Shannon. The boy's father worked as an air traffic controller, and his mother was a housewife.

Everything was fine for ten years, but then the mother left the family. She appeared in the life of her son many years later, when Murray had already become a famous actor. There was no warm meeting because Chad did not forgive his mother, and he slammed the door in her face.

As a child, he loved to arrange theatrical performances for his relatives. Pediophobia did not hamper him, although he had been afraid of dolls since childhood. Chad's grandmother Michael Murray collected porcelain dolls, and when the grandson visited her, he could not be in this room because the dead eyes of the toys frightened the child.

The second hobby of the guy was football. During the game, Chad injured his leg and was hospitalized. He had time to dream about the future. Life in the family was difficult as they were always short of money, so Chad Michael had to earn extra money. He worked as a delivery boy and dispatcher at a car company.

In the hospital, Murray met a nurse who worked as a part-time model. She convinced the guy to try his hand at the modeling business after recovering. Chad followed the advice. Two years later, he won a scholarship to a modeling convention from a modeling agency in Buffalo. Soon, agents paid attention to the young man, and in 1999 he went to conquer Hollywood. There, Chad Michael Murray advertised the products of brands, and in his free time, he improved his acting skills.

It is interesting that the future celebrity earned the first money, delivering newspapers. Then he got the post of a doorman in a bakery, and a little later, became a dispatcher at a car company. So the artist’s career developed gradually.

He made his screen debut, playing small roles in the TV series Diagnosis: Murder and CSI: Crime Scene Investigation.

Murray received his first prominent role in 2003. It was the film Freaky Friday, in which he starred with Lindsay Lohan. The movie was a success, and the aspiring actor got a role in the TV series One Tree Hill. The first season of the project attracted about 4.5 million viewers. Chad’s photos appeared on the covers of popular magazines.

The following year, Murray starred in the film A Cinderella Story, which critics ripped to shreds. But negative reviews only fueled the interest of viewers, and this project became the highest-grossing movie in the filmography of Chad Michael, grossing $70 million at the box office.

Chad later recalled that there was one awkward moment during filming. The comedy director demanded that he and the lead actress, Hilary Duff, participated in a kissing scene immediately after the first meeting. The director claimed that they would get used to each other faster. Then Chad asked to leave him and Hilary alone to allow the on-screen couple to get to know each other better. As a result, they talked and could work together. So the awkwardness was left behind.

After A Cinderella Story, the career of the actor rapidly took off. He was invited to star in the horror film House of Wax, and then there were shootings in the movies Home of the Brave, Christmas Cupid, The Carrier, and other projects. From 2013 to 2016, the actor played Jacob Orr in the TV series Chosen, and in 2014 he starred in the project Agent Carter, which was closed in May 2016 due to low ratings.

In 2015, Chad appeared in two TV shows: Texas Rising and Scream Queens. The same year, viewers saw the actor in the drama Other People's Children.

After a while, he played the leading role in the western Outlaws and Angels. Chad portrayed the leader of a criminal gang, who broke into the house of peaceful, righteous citizens, fleeing from the chase. This act caused the events that the criminals did not predict.

Chad met his first wife, actress Sophia Bush, on the set of One Tree Hill. In the spring of 2005, the lovers celebrated the wedding, but six months later, they announced the breakup. On December 29, 2006, the couple officially divorced. The newspapers wrote that the cause of the separation was Paris Hilton, who was Chad’s House of Wax co-star.

In 2006, Murray started a relationship with Kenzie Dalton, and a few months later, the couple announced their engagement. The love affair lasted several years, but in the summer of 2013, Chad and Kenzie broke up.

Then Murray had a love affair with actress Nicky Whelan, and in 2014 he met and fell in love with colleague Sarah Roemer. At the beginning of next year, the couple announced the upcoming wedding. Soon, reporters wrote that the lovers had secretly married. On May 31, 2015, Murray had a son. And in March 2017, Sarah gave birth to a daughter.

The celebrity’s best friend is the Supernatural star, Jared Padalecki. The actor also loves dogs and has six pets at home.

The actor has his initials “CMM” tattoo on his right shoulder. Therefore, in movies, they have to hide the letters, superimposing other images.

The actor leads a healthy lifestyle, goes to the gym, skates, plays basketball, participates in charity events. He also dreams of opening a restaurant.

In 2017, the actor tried his hand at a new field. He co-wrote with Heather Graham the thriller American Drifter, which was released in late 2017.

The same year, Murray's filmography included the leading role in the biographical series Sun Records. He portrayed the character of Sam Phillips, the creator of the label.

In 2018, Chad played a title role in the television movie The Beach House.

Murray has got one of the central roles again in the horror film Camp Cold Brook, which goes through the post-production stage.

As of 2019, Chad Michael Murray has an estimated net worth of $12 million.