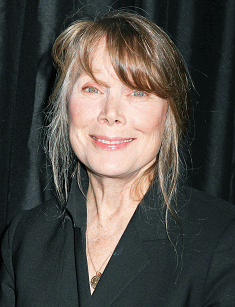 Sissy Spacek is an American actress, widely known for her roles on the 1970s and 1980s. She is the one who perfectly brought Stephen King’s Carrie to life, portrayed Loretta Lynn, who was still alive, in a way that the singer was satisfied, and got into various cinemaholics’ lists as actress re-markable numerous accolades. Moreover, the cinema allowed Sissy to meet her partner, Jack Fisk, with whom they live together for 45 years.

Although Spacek isn’t tall, she achieved great heights across various spheres of art and life.

Sissy Spacek was born on the 25th of December, 1949, at 12:03 AM. It happened in Quit-man, Texas, where she spent her childhood and attended school.

Her parents were Virginia Frances and Edwin Arnold Spacek Sr., who was an agricultural agent. Sissy was the only girl in a family with three children. She also had a cousin, Rip Torn, a fa-mous comedian, who influenced her a lot. For instance, she tried changing her name, but he insisted on going only with a short form. Eventually, she stayed with Sissy, since that was the name her brothers used.

Spacek is of very mixed ethnicity; she has some Moravian ancestry, German, English, and a little bit Irish.

As it was stated before, she graduated from a local school, Quitman High School, and was honored as a homecoming queen.

At the age of seventeen Spacek experienced a personal tragedy, since her elder brother died from leukemia. According to her words, this incident completely changed her view and values. Sis-sy decided not to go to college since she believed life was too short to spend it on education, so she went on with a career. So, she changed the location and tried living a new life in another city.

Spacek didn’t start as an actor, which is the fact that has to be stated.

Her first performance is dated back to the time when she was 6. After graduation, Sissy started as a singer. She found an appropriate label, took a stage name Rainbo, and in 1969 recorded a single "John You Went Too Far This Time», dedicated to John Lennon and his appearance in the nude. However, her songs turned out being commercially unsuccessful, so Spacek dropped music.

Sissy decided to try herself in acting and was cast as an extra in the film Trash (1970). This was made only with the help of her brother, who also assisted her in the next step.

She enrolled at the Lee Strasberg Theatre and Film Institute in New York, a school that had a massive list of notable alumni. The famous director in 1969 founded it.

Prime Cut (1972) was the first movie where Spacek was credited. She portrayed a troubled youth, involved in human trafficking. The next year she played a pretty much the same role in Badlands, where Sissy’s character was a girlfriend of a serial killer, portrayed by Martin Sheen. The filming was determining since she met her future husband there.

Jack Fisk was the one who lead Spacek to her first breakthrough performance. The art direc-tor introduced the woman he loved to Brian De Palma, and eventually, Spacek secured the role as Carrie (1976), the leading character of the same name movie. It is a classic supernatural horror based on Stephen King’s novel. Carrie told the story of a teenager with telekinetic powers; however, the one who was really bullied by her peers. According to the interview, the role was achieved at the cost of great effort, since Spacek tried to convince the crew who was against her. Subsequently, her acting was highly estimated and got exalted reviews.

Two more works preceded the next significant movie. In 1976 Spacek made a small appear-ance in Welcome to LA, which was an Alan Rudolph’s directorial debut. The following year she played one of the leading roles in an independent movie 3 Women (1977), which received wide-spread critical acclaim and the Cannes Best Actress Award (Shelley Duvall). Although Spacek was especially praised for her work in the avant-garde movie based on a director’s dream and then adapted, it wasn’t the time of her glory.

In 1980 Sissy Spacek was given the Oscar for the role of Loretta Lynn in the movie Coal Miner’s Daughter. Lynn was a real person, a trendy country music singer, and she chose the actress for the film by herself. Eventually, it was Spacek, who did a great job performing the soundtrack on her own and portraying the singer since she was 13 till the late 40s. A lot of critics noticed how in-visible her makeup was due to her exceptional acting. What is interesting, Sissy also learned how to do the Appalachian accent.

There was a little controversy in Spacek’s career connected with the part in Heart Beat (1980). The still young actress desperately wanted the role of Carolyn Cassady: she read more than four thousand pages, carrying out vast research. So, a «No» answer wasn’t an option for her. How-ever, the producer and the director decided to refuse her and took Spacek to the restaurant. After learning the unpleasant piece of information, she shattered a glass with bare hands and got the part as a result.

On the whole, the decade could be described as a successful one for Spacek, since she ap-peared in ten movies, receiving for Oscar nominations and other accolades. These were for her roles in Missing (1982), The River (1984), and Crimes of the Heart (1986).

In the 1990s Spacek’s movie list enlarged and was widened with some short movies and TV shows. However, again her most notable role was in a Hollywood movie The Grass Harp (1995), in which the famous actress portrayed the overbearing entrepreneur in a small town in Ala-bama.

In 1999 Spacek took part in a film that was also demonstrated during the Cannes Film Fes-tival, The Straight Story by David Lynch.

In the 21st century, Sissy Spacek became extensively discussed again since her performance in the movie In the Bedroom (2001) unanimously considered brilliant. The role of Ruth Fowler was the one that brought her the biggest amount of accolades.

Spacek’s significant and most recent appearances include a part in the Netflix TV series Bloodline, web series Castle Rock and Homecoming, and a supporting role in a drama film The Old Man & the Gun, where she plays a love interest of Robert Redford’s character.

Spacek is married to Jack Fisk, an art director, and producer. They met in the 1970s on the filming of Badlands, and legally united in 1974. They worked together a couple of times, for in-stance, in the films Raggedy Man (1981) and Violets Are Blue (1986), since Fisk himself was the director.

The couple has two children: Schuyler and Madison Fisk, which are also connected with the artistic sphere.

The family resides in Charlottesville, Virginia, on 300-acre farmland named «Beau Val». Sissy moved there with her husband and daughter after Schuyler was born in 1982.

Spacek has an estimated net worth of $15 million.

In 2011 she was honored with a personal star on Hollywood's Walk of Fame.

Besides acting, Spacek published an autobiography entitled My Extraordinary Ordinary Life. In the book she told her story in details, focusing on the childhood in Texas and inviting the reader to feel everything she was surrounded with. However, the novel might not be an exciting one for those who are not interested in the actress’s life. She also narrated a couple of audiobooks.

Another amusing fact about Spacek in that she made a nose job at the beginning of her ca-reer; however, there was nothing wrong even before the rhinoplasty.

Sissy Spacek is one of the eight famous actresses that have been nominated for the Acade-my Award six times! Although it is a very big honor, she garnered the Oscar only once, as the Best Actress in Coal Miner’s Daughter (1980). Moreover, Spacek received a Grammy nomination since she performed two songs which were included in the soundtrack of the same movie; she ran for the Best Country Vocal Performance, Female.

Overall, Spacek also holds three Golden Globe awards with seven nominations, three Emmy ones, and four BAFTA and Screen Actors Guild nominations, co-holding the one for the Outstand-ing Cast in a Motion Picture for The Help (2011).