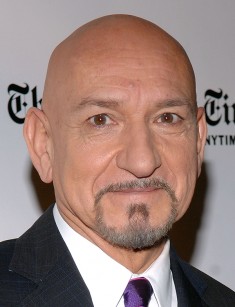 Ben Kingsley in 1987The personal star on the Walk of Fame in Hollywood, the Order of the British Empire, the Knight Bachelor’s title. And also many various awards among which Academic Awards, BAFTA, Golden Globe, Grammy, and Saturn Awards. His colleagues can only dream about such "collection" of honors and awards. But Ben Kingsley hasn’t dreamt about it though he has been working hard for it. Due to his efforts, labor, and talent, he has turned into the Hollywood star, and at present, the actor has millions of admirers.

Ben Kingsley is half Hindu and half Jewish. The actor’s grandfather was engaged in the trade of spices in Zanzibar, and his father – Rahimtulla Harji Bhanji – was born in Kenya where his father arrived for trade issues. Rahimtulla became the doctor, and in 1940 he went to Britain where he met the beautiful Jewish woman Anna Lyna Mary Gudman, the model and the actress.

Their son Krishna Pandit Bhanji was born on the eve of 1944 in the County of Yorkshire in the town of Scarborough which is situated on the coast of the North Sea. Krishna has shown his creative skills in childhood. For the first time, the boy appeared on the stage when he was studying at humanitarian school. When studying at Pendleton College and University of Salford the boy has grounded in his desire to perform on the theatrical stage.

In 1967, the actor took the pseudonym of Ben Kingsley following the advice of his parents. The 23-year Krishna has become the member of Royal Shakespeare Company’s troupe. Ben Kingsley began his creative career with the debut in the performance Volpone staged by the play of Ben Jonson. In Shakespearean play Midsummer Night's Dream, the young actor was entrusted with one of the leading roles with which he managed to cope brilliantly.

What about cinematography, in 1966 Ben Kingsley appeared in the series Coronation Street in which he played the role of Ron Jenkins. After this first role in the series there followed other parts in the following series: Orlando, Jackanory, Play for Today, The Adventurer, Crown Court. Kingsley had his debut in the full-length feature movie in 1972, when he played the role of Royale in the drama Fear Is the Key. Ten years later, after many episodic roles, Ben Kingsley was entrusted with the star role of Mahatma Gandhi.

The biographic drama Gandhi which was released in 1982 has brought world popularity to the actor and many remarkable awards. For the embodiment of the character of Mahatma, Ben Kingsley received Academic Awards, BAFTA and the Golden Globe Awards. The movie critics called the actor Breakthrough of the Year, and the audience keeps an eye on the actor since that time. It’s noteworthy that the director considered Dustin Hoffman and Anthony Hopkins for Gandhi's role, but Richard Attenborough preferred to choose the little-known actor.

By his appearance, Ben Kingsley resembled the character, and the actor's ancestors were born in the Indian state of Gujarat in which Mahatma was born as well. The scene of the funeral of the Indian ideologist has been included to Guinness Book of Records. There were 300 thousand people involved in this scene, from which the third part consisted of the volunteers who paid tribute to the memory of their great compatriot. The picture received eight Academic Awards and became the Film of the Year, and Ben Kingsley became famous overnight. The transformation in Mahatma Gandhi turned out to be difficult: the actor had to embody the character in the interval from his 37 years till the murder at the age of 78.

After the role in the drama Gandhi in 1980, the actor took part in ten different movies though he received his next star role only in 1989. It was his work in the picture under the title Murderers Among Us: The Simon Wiesenthal Story which brought Emmy Awards to Ben Kingsley. The actor got three more Grammy Awards for his roles in the movies Joseph, Anne Frank: The Whole Story and Mrs. Harris. In the early nineties, there was premiered the gangster biopic under the title Bugsy in which Ben Kingsley performed "mafia accountant" Meyer Lansky. For this role, the actor got the nominations for Academic Awards and Golden Globe Awards.

In 1993 there came out the drama Schindler's List directed by Steven Spielberg which told about the German businessman who managed to save one thousand Jews from Poland at the times of the Holocaust. Spielberg entrusted Ben Kingsley with the role of Itzhak Stern, a Jewish accountant saved by Shindler.

Ben Kingsley was nominated for Academic Awards, Golden Globe and SAG Awards for Best Supporting Actor in the thriller Sexy Beast where he appeared in the role of Don Logan. The actor received the same nominations for his role of Colonel Bernie in the drama House of Sand and Fog directed by Vadim Perelman which came out on the screen in 2003. After the release of the movie House of Sand and Fog, the movie critics and admirers of Ben Kingsley were again convinced how easily the actor coped with difficult profound psychological roles.

The Hollywood actor received one more similar role of the chief physician of the mental hospital for the criminals in Martin Scorsese's horror movie Shutter Island where Ben worked on the same film set together with Leonardo DiCaprio. The plot of the thriller Stonehearst Asylum tells about the tragic events in the mental hospital. In this picture, Ben Kingsley worked together with Kate Beckinsale. This movie is a screen-adaptation of Edgar Poe’s story under the title The System of Doctor Tarr and Professor Fether. Beckinsale performed the role of Eliza Graves, the patient of the clinic and Kingsley transformed into the character of the director of the clinic Dr. Silas Lamb, who appears to be a cruel murderer and maniac.

In 2007 there was held the premiere of the melodrama Elegy directed by Isabel Coixet. In this movie, he embodied the character of the teacher and literature critic David, who left his family and screws around and cutting off the spigot. Penélope Cruz has played the role of one of his mistresses - Consuela Castillo. The second actor's cooperation with the director Martin Scorsese has been realized in the adventure project Hugo which was released in 2011. Chloë Grace Moretz and Asa Butterfield have become Kingsley’s partners on the movie set. For his role in this movie, the actor was nominated for Saturn Awards.

The actor was lucky to be invited to the fantastic action movie Iron Man Three shot by the Marvel comics. For the role of Trevor Slattery, the actor received Saturn Awards. In this movie, the leading role was performed by Robert Downey Jr. The picture earned $1 billion in the world hire. In 2015 Ben Kingsley's admirers saw five new projects with the participation of their favorite actor, the brightest one of them – is the biopic The Walk directed by Robert Zemeckis and the thriller Self/Less.

In a year Ben Kingsley voiced over the personage of Bagheera in the animated series The Jungle Book, and in 2016 the actor got Screen Actors Guild Award for his role in the series Tut.

The British-German project Collide became one more remarkable premiere of 2016. For the first time, the fighter with the participation of Ben Kingsley and Anthony Hopkins was displayed in Japan. The actor has in his filmography which covers half-century, 130 full-length movies, and series, but he enriches his list every year with 5-7 new projects.

The star has four children. In his first marriage, his wife Angela Morant gave birth to his firstborn Thomas and daughter Jasmin. They have the surname Bhanji. Ben Kingsley’s second spouse – the director Alison Sutcliffe – gave birth to two boys called Edmund and Ferdinand. Their surname is Kingsley.

The actor’s third marriage with his colleague Alexandra Christmann came to an end with the scandal: on the web, there appeared frank pictures of Alexandra after what Ben Kingsley filed for the divorce. Two years later the British actor married once again: Brazilian Daniela Lavender who is 31 years younger than Ben became his fourth spouse. They got married in autumn of 2007 and had settled in Britain.

In 2017 the actor presented to spectators the new picture under the title Watership Down. It’s a joint project of three countries – the USA, Britain, and Ireland. This mini-series is based on the same-name novel of Richard Adams. Ben Kingsley played the role of General Woundwort in this series.

The working capacity of the Hollywood star is striking as the series Watership Down is just one of his five projects of 2017. The same year Kingsley took part in the following movies - The Ottoman Lieutenant, War Machine, Mary Mother of Christ and Backstabbing for Beginners. The premieres of the movies Nomis and A Doll’s House are set for 2018. 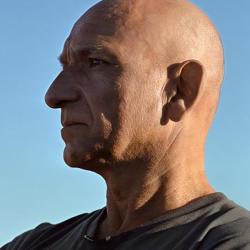