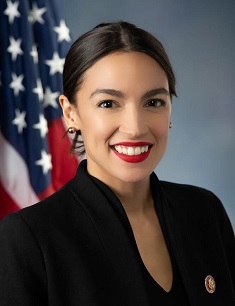 She is a promising politician and activist whose victory on the 2018 campaign became a total shock for political commentators. Giving a perfect example that a personality can achieve heights in politics without significant social influence, power, and wealth, Alexandra became a favorite of people and one of the most reliable politicians.

A third-generation Bronxite, Alexandra, raised in the conditions of increasing income inequality. She experienced the reality in the Bronx and inspired to organize her community, which could live without stark contrast in opportunities.

She was born on the 30th of October in 1989. Her father was from the Bronx. While her mother was from Puerto Rico. Since childhood, the girl displayed an acute and inquiring mind and had several significant accomplishments. Thus she did microbiology research, which was highly appreciated. In 2008 she entered the university in Boston, where she studied Economics and International Relations. When her father passed away, she met difficulties in settling his estate.

She worked as an intern for the senator, but after graduating, she had to pull extra shifts to support her family. Alexandra worked as a bartender and waitress.

At the very beginning of the career, the young and promising politician took part in the presidential campaign of Bernie Sanders. She worked as a volunteer organizer and got significant experience in electoral organizing and activism. She came across the country, stood with indigenous communities. She visited various communities affected by the Flint water crisis, which impressed her. Later in one interview, Alexandra confessed that people of North Dakota inspired her to work for her community even though she hadn’t social influence, power, and wealth.

One day after her trip to Dakota, she got a phone from the organization which recruited prospective candidates. Then she decided to launch a campaign in Congress, people-funded and grassroots.

During this campaign, the young politician had to meet financial disadvantages. She decided to build her strategy in a “different way” without significant financial investments. The design of her logo was connected with revolutionary posters.

The young candidate was the only figure who challenged the American politician and lobbyist Joe Crowley who hadn’t any significant opponents since 2014. The candidates were invited to the political show on the 18th of June, but Crowley sent his aide. As to endorsement, she was financially supported by the progressive organization and the actress Cynthia Nixon.

On the 26th of June, the young candidate had won with 15 percentage points on the primary election. This news became a total shock for politicians and political commentators. In general election, her primary opponent was Anthony Pappas.

Steadily the young politician became a star of elections for one person and the unpleasant surprise for others. She was endorsed by progressive organizations, including Barack Obama and Bernie Sanders. She won the election with a big breakaway and attracted nationwide attention to her personality.

Some people tried to embarrass a successful politician. Anonymous user posted a video dating to Alexandra’s college years, where she danced. Media stood for her defense, and Alexandra posted a “lighthearted video” where she was dancing to Edwin Stars.

In 2019 she entered Congress with a significant media presence. She had more than 4 million subscribers on Twitter and more than 2 million on Instagram. But in one interview, the politician confessed that she didn’t use her private account on Facebook and tried to minimize her presence on Twitter and Instagram, and called social networks “public health risk.” Her public speeches on the congress platform were posted on Twitter and set a record as the most-watched videos among the members of the House of Representatives. She asked the constant president specific questions thanks to which she got the other accolades.

As a Democrat, she represents the progressive platform. Alexandra supports Green New Deal, Medicare for all, 70% tax rate for income above $10 million. She stands for a federal jobs guarantee and abolishing Immigration and Customs Enforcement. The politician also supports the LGBT community. She appeared on the video to help raise money for trans children. In January 2019, she performed with a full speech about measures to ensure minority equality.

She campaigned in favor of establishing tuition-free public colleges and trade schools. Alexandra said that she continued to pay off her student loans, and she wished to cancel all student's debts. On the 28th of July, she stated that she supported the idea of Trump’s impeachment. The politician has got her website which tells about her main political issues.

In October 2019 Alexandra as a member of “Squad” endorsed and supported Bernie Sanders on Twitter. Joe Biden dismissively responds this endorsement.

She is not married, but Alexandra is dating the web-developer and resides with her boyfriend in the Bronx. Alexandra is Catholic. Her net worth is about $100,000. She made $26,000 annually, but the politician pays off her college debts and has got a high cost apartment. Her monthly salary is about $14,500. Her height is 5 feet 4 inches. The congresswoman prefers to wear glasses and as it is reported she does it in order to look more intelligent. The list of facts about her heads such detail as she is the youngest congresswoman in the history. Besides she vowed not to take money from corporate political organizations.