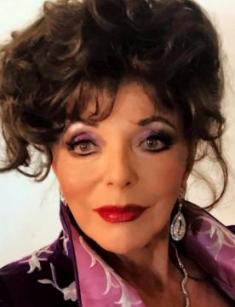 In the mid-1950, Joan Collins was no less popular than Elizabeth Taylor or Marilyn Monroe. In the 1980s, the actress’s achievements were awarded the star at The Hollywood Walk of Fame and prestigious Golden Globe. Unlike Elizabeth and Marilyn, Joan earned her fame for other than acting activities: Collins is a successful producer, writer, and columnist.

The role of bitchy and brilliant socialite Alexis in the iconic series Dynasty made the British actress a top star all over the world. The soap opera became even more popular than the series Dallas.

Joan Henrietta Collins was born in spring 1933 in the capital of Great Britain. The girl grew up in a bohemian family: the parents were involved in art and show business. The mother, Elsa Bessant, was a dance teacher and owned a night club. The father, Joseph William Collins, was a theater agent.

Joan was the eldest among the three children; she had a sister Jackie and a brother Bill. Later, Jackie became a popular writer of novels for women.

Collins had to spend her childhood during the Second World War; however, the terrible events did not touch her family. The girl attended a French-Dutch school; her acting talent manifested itself soon. The nine-year-old child debuted on the theater stage and fell in love with acting for good.

After graduation, the young woman enrolled at the Royal Academy of Dramatic Art, the most prestigious acting school in the country. She also signed a contract with the J. Arthur Rank Film Company.

The British audience got acquainted with the actress in 1951 when she appeared in the melodrama Lady Godiva Rides Again. The debut was successful, and Joan’s career began to develop rapidly. In 1952-1953, she played the main characters in I Believe In You and Decameron Nights; her appearance in fashionable tabloids also contributed to the popularity. Soon, she was named the most beautiful British woman.

Following the wave of success, Collins decided to move further and conquer Hollywood. Twentieth Century Fox Film Corporation offered her a contract. The first works gave the actress the chance to find her place in cinematography. Elizabeth Taylor who collaborated with Metro-Goldwyn-Mayer was her primary rival.

In 1955, three Hollywood projects starring Joan Collins were premiered: Land of the Pharaohs, The Girl in the Red Velvet Swing, and The Virgin Queen. Sometimes, the artist was named the rival of Marilyn Monroe: young brunette was as pretty as the famous blonde.

The new star was showered with offers. She participated in the melodrama The Opposite Sex, The Wayward Bus, and Island in the Sun. Collins’s collaboration with Gregory Peck and Paul Newman in the late 1950s-early 1960s added her even more fame.

In 1963, when Joan gave birth to her first child, there was a decline in the actress’s career. Although the movies with the artist failed, she did not get depressed and switched to television; it was the right choice. At the same time, she did not ignore cinematography and had several guest roles in Star Trek, Batman, Mission: Impossible, and Starsky and Hutch.

The old fame returned in the late 1970s: The Stud and The Bitch grossed pretty much. Both movies were the screen adaptation of Jackie Collins’s novels. While people liked them immensely, nothing can be compared to the popularity that the melodrama Dynasty brought.

The British and Hollywood celebrity personified the vamp woman Alexis Colby. This character appeared when producers were close to finishing the project because of its low ratings. Joan saved the series and attracted the old and new fans. Dynasty was broadcast until 1989; millions of soap opera lovers watched it. Collins received her star at the Hollywood Walk of Fame and the Golden Globe Award for this work.

In 1986, Joan tried herself in producing in Sins and Monte Carlo where she also played the main characters.

In the 1990s, the actress continued to be actively involved in various projects; In the Bleak Midwinter and Annie: A Royal Adventure! were the most notable among them. In 1997, Aaron Spelling invited the star to “save” his Pacific Palisades and benefited.

The actress continued to appear on the screen in the new century. In 2000, she was nominated for the Golden Raspberry Awards: Worst Supporting actress for The Flintstones in Viva Rock Vegas, but the next year was marked with the significant improvement. Collins collaborated with Shirley MacLaine, Elizabeth Taylor, and Debbie Reynolds in These Old Broads.

In 2015, the artist received the Order of the British Empire.

Brilliant Joan reminds of her glamorous and bitchy characters. She has been married five times; all her husbands belonged to the bohemian circles.

In the early 1950s, Collins married the actor Maxwell Reed. Ten years later, she fell in love with the actor and singer Anthony Newley; they had a son and a daughter. The next decade, the woman left him for the recording studio owner Ronald S. Kass; a daughter was born in this union.

Children have never been a reason to keep marriages. In the mid-1980s, Joan married the singer Peter Holm, but the fourth marriage ended with divorce again.

In 2018, the legendary actress celebrated her 85th birthday. The senior age does not prevent the woman from wearing bright makeup and looking splendid. Joan remains a fashion icon, and Instagram pictures prove that. Collins’s height is 5.51 feet (168 cm.), and her weight is 125.66 lbs. (57 kg.).

In 2018, the artist expanded her filmography with the series American Horror Story: Apocalypse.

People know Joan as a writer, too: she created several bestselling books.