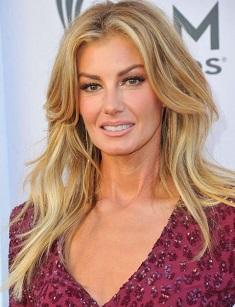 Audrey Faith McGraw (née Perry), generally known as Faith Hill, is an American singer and record producer. She is named one of the most successful country artists of all time, having sold more than 40 million albums worldwide. In her career, Hill has collaborated with many outstanding musicians, such as Taylor Swift, Tim McGraw etc.

But what is the secret of Faith Hill’s fame?

Faith Hill's life started sadly – she was neglected by her birth parents and left in an orphanage. She was born in Ridgeland, Mississippi on September 21, 1967. Ted and Edna Perry adopted her and named Audrey Faith Perry. Besides her, the spouses had two more children – two sons of their own. Faith was raised according to Christianity.

From the very infancy, Faith Hill became interested in music. When she was 7, she made her first public performance at a youth program. As a child, Hill had an idol – Elvis Presley.

Being a teenager, Faith Hill became a member of a local church choir. At the age of 17, she decided to create her own band. She found other young outstanding musicians, together they performed at local events. She was invited to sing in a number of churches and even sang for the prisoners at the county jail.

Speaking about Faith Hill's education, she studied at McLaurin Attendance Center from which she graduated in 1986. Later she entered Hinds Junior College in Raymond, Mississippi. Shortly after she understood she didn't want to waste her time attending college and dropped out of it to focus on music.

At the beginning of her career, the girl took part in an audition for the job of singer Reba McEntire's backing vocalist but failed. To earn a living, she took up odd jobs. She worked as a salesgirl and a server, too.

Faith's marriage with music publisher Daniel Hill marked a crucial point in her life. Due to him, she became a backing vocalist for Gary Burr and soon worked her way to her debut album, 'Take Me as I Am,' which was released in 1993.

Faith Hill’s track 'Wild One,' from her debut album, got to the Billboard charts, holding on to the first position for four consecutive weeks and creating a record at that time. The song 'Piece of My Heart' also advanced to the county charts in 1994. Generally, the collection brought her tremendous commercial success - she sold over three million copies.

In 1995 the musician pleased her fans by the second album entitled 'It Matters to Me' which also happened to be successful. As a result, Hill was invited to the 'Public Broadcasting Service' (PBS) music show 'Austin City Limits.' The next year, she embarked on a tour with country singer Tim McGraw.

That time they released their song 'It's Your Love,' – it stayed at the first position of the country charts for six weeks and was honored by the 'Academy of Country Music' and the 'Country Music Association.'

Hill called her third album 'Faith'. Generally, it consisted of mainstream pop. In 1999 she added the album 'Breathe' to the list of her collections. Remarkably, it brought her two 'Grammy' awards.

Because of the album, Faith Hill's fans thought the musician would change her style from country to regular pop. However, the musician managed to maintain a balance between two styles. Then she published new songs 'Come Home,' 'Somewhere Down the Road,' 'Where Are You Christmas.' The latter was co-written by R&B artist Mariah Carey. It won the 'Country Music Association' award for the 'Female Vocalist of the Year' in 2000.

2005 was marked by Hill's new country album entitled 'Fireflies.' Its track, 'Mississippi Girl,' told the tale of her life and marked her return to her country roots. The next year, she started a successful world tour, the 'Soul2Soul II Tour,' with her husband. It was named the highest-grossing country music tour ever, touching $90 million.

Faith Hill also took part in the recording of her husband's album 'Let It Go' and his music video in 2007. Her most noteworthy songs include 'Country Roads,' 'I Will Always Love You,' 'There You’ll Be (In My Dreams/Soar Above the Sky), 'Just Around the Eyes,' 'On The Road Again.'

The musician signed a contract with 'Sony Music' for a duet album with her husband, Tim. The release of the album coincided with the exhibit of 'Mississippi Woman, Louisiana Man' at the 'Country Music Hall of Fame and Museum.' The exhibit is a tribute to the couple.

In 2000, Faith Hill succeeded to appear on many TV channels and in several magazines. She visited the 'VH1' show 'Behind the Music.' Besides, Hill sang the American national anthem at the 'Super Bowl' of the 'National Football League' and was named one of the 10 best-dressed women by fashion critic Richard Blackwell.

Faith Hill’s net worth is evaluated at $80 million.

In 1999 Faith Hill embarked on a tour to support a national children's book drive, The Faith Hill Family Literacy Project. The charity was inspired by Faith's father, who had problems with literacy. Fans who donated books at one of her concerts were entered into a draw to meet her personally after the show. Totally, the musician got 35,000 children's book - they were distributed to hospitals, schools, libraries, and daycare centers.

In the days immediately following Hurricane Katrina, Hill and her husband joined groups taking supplies to Gulfport, Mississippi. Besides, they arranged several charity concerts. The two established the Neighbor's Keeper Foundation, aimed to provide funding for community charities to assist with basic humanitarian services in the event of a natural disaster or for desperate personal circumstances.

In June 2010, Hill, along with her husband Tim McGraw, organized Nashville Rising, a benefit concert aimed to raise $2 million for The Community Foundation of Middle Tennessee in response to the flood in early May which killed 22 people.

In 1988 Faith Hill tied the knot with music publisher Daniel Hill. Their relationship ended in divorce in 1994.

Later, the woman engaged with Scott Hendricks. However, their story did not progress further, as she had an affair with singer Tim McGraw and got pregnant.

Faith and Tim got married in October 1996. Before marriage, they had known each other for several years. They have three daughters named Maggie, Gracie, and Audrey. Behind music, Faith Hill dedicates herself to her family.

In 2013, Faith Hill was spotted on the Grammy red carpet Sunday night with a smile that showed off her braces. According to her, she had problems with teeth from the very infancy.

Besides, she received the ‘Grammy Award’ for the ‘Best Female Country Vocal Performance’ and the ‘Best Country Album’ for ‘Breathe’ in 2001. She also won the ‘Best Country Collaboration with Vocals’ award for ‘Let’s Make Love’ at the same award ceremony.