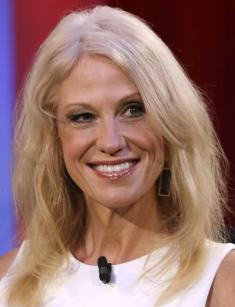 Kellyanne Elizabeth Conway is an American pollster, political consultant, and pundit who serves as counselor to the president in the administration of U.S. president Donald Trump. Conway is regarded as a conservative gender gap expert who has worked for years on women's trends in polling but has had her own controversies relating to comments about women's issues, once calling for femininity instead of feminism in a speech. She also once advised that Republicans stop talking about rape during campaigns.

Do you want to know more about Kellyanne’s life and career? Read her biography below!

Kellyanne Elizabeth Fitzpatrick's birthdate is January 20, 1967. She was born in Atco, New Jersey, to the family of Diane and John Fitzpatrick. Her father was of Irish ancestry, while her mother had Italian roots. Her dad was an owner of a small trucking company, and mother worked at a bank. At an early age, Kellyanne had to get through her parents' divorce – she was only three years old at the time. So, the girl was raised by her mother, grandmother and two unmarried aunts in the AtcoWaterford Township, New Jersey. The family was Roman Catholic.

As a kid, Conway studied at St. Joseph High School from which she graduated in 1985. Studying there, Kellyanne dedicated herself to singing in the choir, playing field hockey, working on floats for parades, and cheerleading. Conway's grandfather, Jimmy "The Brute" DiNatale, was a mob associate of the Philadelphia crime family; DiNatale did not reside with Conway's grandmother, Conway, and the rest of her family.

To earn money, Kellyanne Conway worked on a blueberry farm in Hammonton, New Jersey – according to her words, the woman learned a strong work ethic due to serving there. At the age of 20, she won the World Champion Blueberry Packing competition.

In 1992 Conway graduated from the George Washington University Law School and started working as a judicial clerk for Judge Richard A. Levie of the Superior Court of the District of Columbia.

Kellyanne Conway's political career started when she studied in law school – she served as a research assistant for Wirthlin Group, a Republican polling firm.

Having left the university, Conway was hired by Luntz Research Company.

1995 was marked by launching of Kellyanne's own firm, the Polling Company. The firm has consulted on consumer trends, often trends regarding women. Among Conway's clients, there were Vaseline, American Express and Hasbro.

Kellyanne’s net worth is evaluated at about $4 million. However, due to her husband’s high-flying job and her own public exposure, the real sum could be higher.

In 2016 the Trump campaign said Ms. Conway, a highly sought-after pollster, would work on messaging and frequently travel with Mr. Trump. Shortly after Trump named Conway third campaign manager. She helped him in his political program, chaperoned him in trip to the UK and other countries, arranged his inauguration and also became a subject of Mueller’s investigations. She was invited to an interview with New Day anchor Chris Cuomo to discuss her probable links with Russia.

In 2019 Nancy Pelosi accused her and Donald Trump in a cover-up.

Remarkably, Conway previously supported Trump's primary rival, Ted Cruz. She worked as a strategist for Keep the Promise I, a pro-Cruz super-PAC bankrolled by hedge fund billionaire Robert Mercer that ran attack ads against Trump during the primary campaign, including one blasting the real estate mogul for supposedly supporting government-run healthcare.

In her career, Conway has been criticized for comments she made about women. People criticized her for telling women to embrace femininity, not feminism, in a 2011 speech at the Conservative Women's Network, and for advising a group of House Republicans to stop talking about rape in 2013.

In the latter incident, Former Rep. Todd Akin (R-Mo.) said a woman could terminate a pregnancy resulting from "legitimate rape". After it, Conway "dispensed the stern advice" that Republicans should avoid talking about rape in campaigns, should call it a "four-letter word."

Conway has also criticized Hillary Clinton over Bill Clinton's extramarital relationships. So, she said her opinion in public:

«The fact is that Hillary Clinton could not stand up to a cheating husband, so how in the world would she stand up to North Korea and some of our other enemies around the globe?»

Once Kellyanne was mixed up with a conflict – she was criticized for the pictures where she was sitting on an Oval Office couch with her legs folded beneath her — shoes pressed against the upholstery — during President Trump's meeting with leaders from historically black colleges and universities. There were several opinions about her pose – people supposed it meant the lack of respect or showing her superiority.She blamed the news for the ensuing furor.

Kellyanne Conway has a husband George Conway, a wealthy New York lawyer who was involved in Paula Jones' lawsuit against Bill Clinton and belonged to a conservative legal society. George T. Conway III has taken part in other well-known lawsuits, including tobacco industry cases.

George Conway has been a partner in the Litigation Department of Wachtell, Lipton, Rosen & Katz since January 1994. He joined the firm in September 1988.

Kellyanne Conway has four children. The woman once asked her 11-year-old daughter, Claudia, to change out of a turquoise shirt on Memorial Day and into a blue one because "it wasn't a shade available to Betsy Ross when she stayed up through the night sewing the damn flag.»

Before settling down with George Conway, Kellyanne had been romantically linked with Fred Thompson.

Remarkably, once Conway shared with CNN "State of the Union" anchor Jake Tapper she had been a victim of sexual assault.

As a bright representative of the US politics’, Conway has been shown in Saturday Night Live parody – Kate McKinnon showed her as Pennywise The Dancing Clown in 2017.

In 2019 Kellyanne Conway was invited to the Fox channel’s show with journalist Chris Wallace. After discussing the Mueller report, Wallace started asking her about her family and marriage. Her response was a criticism of such an inappropriate question.

This year the woman also embarrassed CNN’s Jim Acosta – she referred to him as a "smarta--" unliked by other reporters.