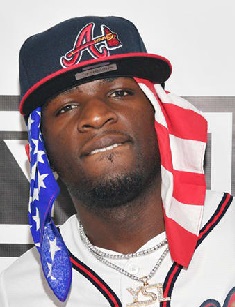 The popular American rapper is widely known for his powerful lyrics, rhythmic tunes and tuneful hooks. The rapper is always on the news due to his pretty lengthy criminal history and sometimes hilarious and weird behavior.

He started thinking of a rap career when he was released from prison for the first time. Because "none of the rappers were talking about this shit." Ralo said that most rappers hadn't ever been prisoned that's why they made it seem exciting. But nobody has told about the hell what starts behind bars. Here he goes, he decided to rap about real difficulties, obstacles and something meaningful. His lyrics tell about Ralo's experience and revelations, as the rapper says in his song, "Music became my personal diary."

In 2015 the rapper recorded his first single "Can't Lie." The official video blew up YouTube, where it got more than five million views.

In April 2015 he dropped his first mixtape "Famerican Gangster" which was released under Ralo's label. The immediately becoming favorite songs were recorded with Gucci Mane, 21 Savage, and Young Thug.

His second tape was released in November 2015. That year the rapper also took part in a project The Dream Team with Young Scooter.

In 2016 he released The Diary of Streets II, the tape was hosted by Birdman and featured with Young Thug and 21 Savage. Here Ralo paid much attention to both verses and tuneful hooks. Ralo said that he was most proud of the song "My Diary" where he expressed his experience of losing the friend and lovely woman.

The rapper believes that music can change people for the better. In one interview he said:

"I'm hoping to feed the streets and be heard everywhere. My goal is to inspire more people to get in better situations. Going forward, I hope more people will tune into my music and my life through music. Stay tuned for my artists I'm pulling on my label, Famerica Records."

There was a verbal altercation between him and Moneybagg Yo. It is unclear where it actually stems from, but Ralo claimed that Moneybagg Yo paid promoters $7,500 to not let him in the club. Since then, they had been firing shots back and forth, mainly on social media. Ralo brought to the essence of hip hop and put his thoughts on wax with "Trending."

Ralo's real name is Terrell Davis, and he was born in Atlanta in 1995. He has a younger sister; their single mother raised the children. Ralo also has a brother who also became the recording artist.

Terrell had a tough childhood as he grew in a dangerous neighborhood. He dreamed of electrician's career before he emerged in the world of music.

He received much experience and influence during his multiple stints. Thus, he became a devout Muslim in prison. He got in the whole drug game and music helped him to find way out.

The rapper was incarcerated more than 30 times, lost a countless amount of friends and relatives, but haven't thought that he had a tough childhood:

"I didn't know other people lived better than I did. I thought everyone's mom and dad sold dope."

The rapper is of Afro-American descent and Muslim. His stage name pays homage to his mother's former boyfriend, who died.

His net worth is about $3 million; the rapper also has a pretty pricey immovable property – apartment complex known as Little Pakistan. It is estimated more than $2 million. Ralo has several luxury cars, yellow Lamborghini among them. It rumors that he made more than $12 million from selling drugs but pay off everything to stay free.

His current aims are not for money or fame; he has got enough money and more interested in expressing himself through his music.

"I really don't care if I'm rich or broke. Just don't put me in jail."

The rapper was repeatedly arrested, last time in April 2018 when he smuggled hundreds of pounds of marijuana. He was claimed in theft, forgery, armed robbery, drug possession, assault with a deadly weapon.

Though the rapper has a pretty lengthy criminal history, Ralo underlines that he has never used drugs. He doesn't eat meat and thinks his main vice is music. During a hearing on Tuesday, prosecutors claimed that undercover police officers had previously purchased drugs and weapons from one of Ralo's apartment complexes, and alleged that he's the leader of a "Famerica" street gang, who commit crimes under Ralo's direction.

In 2017, October, all famous artist from the rap world gathered in-all-white at Gucci Mane wedding. Have never been on marriage, Ralo distinguished himself on the short interview on the red carpet, as a result, was on the news. When Ralo was asked how he felt about Gucci and Keyshia's wedding, he stated,

"Well, I didn't cry at my grandma funeral, but I want to cry right now." When asked what he would like to say to the married couple, he shared that he hopes Keyshia buys Guwop a private jet because "I have to see them in one."

Ralo is active on Instagram where sometimes was caught on some occasions, for example, body shaming. Thus he commented Chris Brown's ex-girlfriend Karrueche Tran's photo in a bikini. Ralo wrote that Karrueche Tran looked better with clothes on.