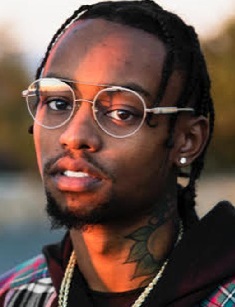 Rob Stone (original name is Jaylen Robinson) is a famous American rap singer from San Diego, California. The musician came to prominence recently. Mostly Stone is known for his single called «Chill Bill» from the mixtape «Straight Bummin.» Besides, his top songs «The Whole Thang», «Too Faded» (feat. P-Lo), «Back in the Field» also became real hits.

Rob Stone's birthplace is San Diego, California, a city what had never earlier produced a rapper who's achieved any real mainstream popularity. He was born there on January 25, 1995. His father gave him a love for music when he was a child. Little Rob was influenced by his dad's vintage music collection and expanded his listening to reggae, hip hop, rap, rock, and R&B.

Stone left San Diego for a college stint in Atlanta but soon realized college life wasn't for him. As soon as he returned to San Diego, he joined the «1207» crew his longtime friends had begun, and they immediately began recording. At first, it was Hustle & Flow by the beach, recording in bedrooms with mics hanging from the ceiling fan.

Rob Stone's professional career started on June 10, 2014, when he dropped his first single «Chill Bill» on SoundCloud. Remarkably, the lyrics were written in the back of a police car. $tone insists there was no marketing tricks, no secret powerful co-signs. They simply put «Chill Bill» on SoundCloud one day, it took off, they released the video, it took off further, and then he began to get calls from labels eager to ensure that they didn't miss out on the next Desiigner and «Panda.»

His «Chill Bill» song has become a viral hit, with video of a recent fight that expertly uses «Chill Bill» as its soundtrack providing a second wave of attention. That buzz has led to a deal with RCA that has the city of San Diego energized, hoping one of its own will finally make it to national rap stage.

The next Stone's work was mixtape «Straight Bammin'» which he released on February 8, 2015. On June 25, 2015, the musician published a video clip of the song «Chill Bill» – he dropped it on his friend's YouTube channel called «Twelve O'Seven.» Stone then released the song as his debut single on June 17, 2016. Initially, the track peaked at number 99 on the Billboard Hot 100 and shortly after got to the number 29 on the chart. It has got lots of positive reviews. The official remix of the song features American rappers DRAM, Denzel Curry, and Cousin Stizz. In September 2016, Stone released his second mixtape «I'm Almost Ready.»

2017 was marked by musician's new album entitled «Don't Wait For It.» The 15-track project, which has guest appearances from Gucci Mane, Zaytoven and Meechy Darko among others was highly checked out by fans.

$tone was signed to RCA in April 2018, and while a major label signing certainly has to feel like a powerful victory for someone from a city what had seen almost none of its own sign to a major, now the hard work begins. Music's history is paved with artists full or promise who signed early and then were unable to find longevity, but history also has its Nellys, its Drakes, its Bryson Tillers and Fetty Waps, artists from cities with no industry machines, no established highway to stardom, who have gone on to platinum album success.

Rob Stone's net worth is estimated at $300 thousand.

Interestingly, there are several men named Rob Stone – he is a host on several shows and a sports commentator for Fox Sports who has covered various sports including Major League Soccer, NCAA and NFL football, and both ESPN and currently Fox's coverage of PBA Tournament Bowling. Another Robe Stone is an entrepreneur, owner of the magazine The Fader - a magazine based in New York City. One more Stone is a famous actor who is known for playing the character Kevin Owens on the sitcom Mr. Belvedere, which was originally aired on ABC from 1985-1990.

In 2017 Rob Stone was messed up with a scandal linked with XXXTentacion. XXXTentacion was punched on stage in the middle of his set! The video has gone viral and everyone rushed on stage after the Florida rapper was knocked out cold at his own event! According to reports, the attacker was stabbed and everyone was wondering if Rob Stone was stabbed, as well. The crowd was chanting “f**k Rob Stone” after the attack occurred and rumors have been circulating ever since. Rob Stone’s beef with XXXTentacion is no secret and in the past, they weren’t even allowed at the same events.

To understand how XXXTentacion and Rob Stone started beefing, you have to understand Stone's beef with Ski Mask the Slump God, another Florida-based rapper who is down with XXXTentacion. According to reports, Ski Mask was escorted off the stage at a show at The Observatory on a San Diego date for Desiigner's Outlet Tour.

As the story goes, Ski Mask tried getting on the mic as Rob Stone was getting on stage to start his performance. Ski Mask got frustrated over the ordeal and decided to not leave the stage. Footage shows that he ended up getting walked off the stage by a number of unidentified men.

When word got to XXXTentacion about what happened at the show to Ski Mask, he took to Twitter to vent. The tweet, which has since been deleted, said,

"Let them know whoever the fuck that is getting fucked in they mouth when I go on tour for putting their peasant hands on my brother."

Rob Stone wasn't here for it, and let it be known in his own tweet.

To which Ski Mask sent his own tweet, insinuating that there was more to the growing friction between himself and Rob Stone.

The very next night on Desiigner's Outlet Tour found Ski Mask and Rob Stone getting into it at the Fonda Theatre in Los Angeles. At the start of Ski Mask the Slump God's set, a pair of individuals are jumped him from behind, causing the three of them to fall into the crowd. Ski Mask is said to have then jumped back on stage, and was chased by a whole squad of people.

After their very public scuffles on the Outlet Tour, Ski Mask and Rob Stone would spend time clapping back and forth at each other, but the next real issue was Stone's claims that he was removed from the Rolling Loud Festival in Miami.

Talking about his body measurement, Stone has a height of 1.77 m. Additionally, his hair color is black and eye color is dark brown.

As for his probable girlfriend, Rob Stone prefers to keep his personal life in secret.