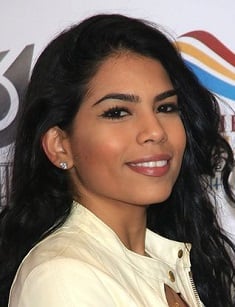 Elizabeth Ruiz received wide acclaim thanks to her elizabethruizxo Instagram account. She is considered to be a model, Internet personality, and Instagram sensation. The Sagua la Grande native has more than 600,000 followers. She became famous, making her funny videos. The most popular were "How Girls Jump to Conclusions" and "Dreams vs. Reality." She started to develop her Instagram in January 2012 when she was a waitress at a Hooters restaurant.

Since then Elizabeth has appeared in video clips of such celebrities as Nicki Minaj, Snoop Dogg, and Trey Songz. The pick of her fame was in 2016 when her sex tape with Denver Broncos football outside linebacker Von Miller was released. Elizabeth Ruiz also had some movie roles. Her net worth is estimated to be roughly $100,000, but it is unproven information.

Elizabeth was born in Sagua la Grande, a small city with the population of about 50,000 people, which located on the north coast of the province of Villa Clara in central Cuba, on the Sagua la Grande River. She was born there on November 21, 1991. Soon after Lizzy’s birth, her family moved to Miami, the state of Florida, US. For unknown reasons, Elizabeth keeps the facts about her childhood in secret, although her dream to get on a big screen. She never told about her relatives.

There is no information if she has siblings or not. Also, Elizabeth doesn’t speak about her education. The only is known she worked in a Hooters restaurant, where she was a waitress. Right, that time, she began interested in modeling.

The development of social networks has opened many opportunities for people. Elizabeth was not an exception. Knowing about her beautiful appearance, she created an Instagram account and began posting the photos of herself. She quickly understood that people liked her. Her fan-base grew, making Elizabeth the owner of the account with 100,000 subscribers. Then she decided to quit her job and to concentrate on her Instagram modeling career.

Another popular mobile application, “Vine” appeared in 2013. Elizabeth was among the first active users of it. She started uploading short comedy videos on her Vine account, which increased her popularity on the Internet. She collaborated with a famous Vine group named Viner DeStorm Power. The vine that she made with this group was titled “How to Hate on Vine”. The members of this team other than Elizabeth were Melvin Gregg, Hannah Stocking, Alex James, and Official JANINA. Elizabeth has also made her career stride in the right path by making a video titled as “Vixen”.

In 2011 she took a small movie role in Lotoman. Apart from small movie appearances, Elizabeth started working with Hollywood celebrities. She was the part of Snoop Dogg’s music video. Later she worked with Trey Songz and Nicki Minaj. However, Ruiz achieved her current popularity thanks to the sex tape scandal, but not thanks to her hot bikini photos and twerk videos.

In June 2016, Elizabeth visited Cancun, the state of Mexico. At the same time, there was Von Miller, famous American football player, Denver Broncos outside linebacker, the owner of Super Bowl 50 and Super Bowl 50 MVP. The couple met each other, spent a good evening, which continued in the model’s hotel room. So they spent a night together.

Of course, Elizabeth taped everything that happened in the room between them as any Internet personality. Miller knew about Elizabeth’s taping and didn’t mind it, asking a model not to show that video to anybody. Elizabeth agreed, but her desire to become the next Kim Kardashian won her promise.

The Cuban contacted with several tabloids and businessmen, trying to sell sex tape. Von Miller found out about it and tried to stop the model. She offered him to buy a record for $2.5 million. After that, the football player went to court without telling his real name. After a tough legal fight, he managed to secure himself, as the court forbade Elizabeth from selling or uploading their sex tape.

However, in November 2016, in an interview with TMZ, Elizabeth claimed that she has never attempted to extort the Von Miller. She said Miller was the one who pressured her into recording the act. She had begun having sex with Miller when he suggested: “we should probably record this”. Elizabeth said to the reporter:

“When I finally gave in I was like; I agreed to record it. So I pulled out my phone, and we started recording. The whole time, everything was consensual. After the trip, Von did call me, and we talked briefly. He was like, “Do you still have the tape?” I was like, “Yes, I do.” He was like “OK, cool, send it to me.” I was like, “No, I don’t want it to get out”. He never asked me to delete it. I never went up to Von to ask him for $2.5 million or $1. My attorney told them what the situation was, and they threw out the first offer, and my attorney counter-offered with the $2.5 million”.

In 2017 in a radio interview with Hollywood Unlocked, Elizabeth, discussing with the host her trying to sell a tape, was asked if Miller had a “big weenie”. The model told the host who had a small one, and she named DeSean Jackson. She said: “Man, he's built like an Asian”. Later the girlfriend of DeSean came into conflict with Elizabeth. Later the model apologized for her words.

In the interview to Haute Velvet, Elizabeth said that her biggest achievement in life was not all the work that she had one but the graduation that she has completed. She also has revealed that her biggest derma then was to be a famous actress. Elizabeth is very proud of her model career. Also, she loves to listen to music. In 2013 her favorite piece of lingerie was Teddy's.

Elizabeth keeps the facts about her life in secret. According to authoritative sources, it has been estimated that Ruiz’ net worth is as high as $100,000, which would seem very likely to increase in the upcoming years, assuming that she successfully continues her career. Elizabeth said that she was making enough to pay her bills, to stay wealthy and take care of her mother.

Nowadays Elizabeth is filmed in some movies, trying to make her dream come true and to become a popular actress. That’s why she is fully-focused on her career, doesn’t have children, and remains single. Elizabeth is also active on Twitter. She has only 8,000 subscribers there, but the model can raise their amount fast.