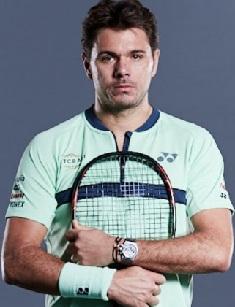 Stanislav Wawrinka is a famous professional tennis player from Switzerland. He has a 15-year career experience in this kind of sport. The sportsman has succeeded to gain recognition worldwide.

Its high time for us to know more about Wawrinka!

Stanislav Wawrinka was born on March 28, 1985, in Lausanne, Switzerland to the family of Wolfram Wawrinka, a farmer, and social worker, and Isabelle, an educator. His family moved to the country during World War II, leaving Czechoslovakia after Germany had invaded.

Stan became interested in tennis at the age of 8. Initially, he played rarely – one time a week. However, when he turned 11, Wawrinka started playing it three times a week. When he was 15, Stan dropped out of school to dedicate himself fully to tennis. But he didn’t want to stop getting an education at all – he continued his schooling by distance education with the French organization CNED, which offered him greater flexibility.

In 2002 Wawrinka was named a professional player – he was only 17 years old. His coach was Dimitri Zavialoff – he developed his abilities, taught him to warm up, to use secret «weapons».

Wawrinka has represented Switzerland in many competitions – he is a three-time tournament winner, Olympic champion and champion for his country. 2008 gave him one more achievement – he got to a Top 10 ranking by the ATP for the first time on 12 May 2008, and first reached a career peak of world No. 3 on 27 January 2014, at the same time as he became the Swiss No. 1.

July 11, 2004, is an unforgettable date for Wawrinka – he got to the final for the first time in his career alongside a colleague. Unfortunately, the duo was defeated by Leander Paes and David Rikl. The year was closed with Stan’s 162nd place in the world rankings.

Stanislav was lucky to take part in the French Open. He won against 22nd seed and Olympic Gold Medalist Nicolás Massú in the first round, in four sets. However, he was beaten by the eventual runner-up Mariano Puerta in the third round.

The next Wawrinka’s big event was the US Open. His opponents there were Rajeev Ram and Mariano Puerta – he won them in five sets. Nevertheless, he lost to Nicolás Massú in the third round.

In October Stanislav Wawrinka got to the 29th place in the world rankings.

After getting to the final of the Masters Series event in Rome in 2008, the sportsman got to the top-10.

That year Stan took part in the Olympics and brought his team the gold medal. At the Monte-Carlo Masters, Wawrinka defeated No. 2 Roger Federer in straight sets, an upset which halted the chance of a fourth straight Nadal-Federer final in Monte Carlo.

At the French Open Wawrinka defeated Nicolas Devilder in five sets and Nicolás Massú in straight sets. He lost to Nikolay Davydenko in the third round in four sets.

The 2010 season was opened by reaching the final of the Chennai Open, losing to Marin Čilić in two tie-breaks. In 2011 he won No. 6 Tomáš Berdych along the way to claiming the Chennai Open crown. Besides, he defeated Xavier Malisse in the final in three sets. At the end of the year, Stan shared he had parted ways with his coach Lundgren.

2015 was successful for the sportsman – he defeated Novak Djokovic in the French Open final in June. While some analysts and spectators may have predicted that the Swiss national anthem would be playing at the end of the French Open, only a few people could predict he would become its winner.

But it happened. Wawrinka took down Novak Djokovic in four sets, becoming, at 30 years old, the oldest champion since Andrés Gómez 25 years ago. Wawrinka called the moment «the match of my life.» The upset was particularly unexpected after many thought Djokovic was on the fast track to a Grand Slam in Grand Slams.

In 2017 Wawrinka started playing in Brisbane. He succeeded to get to the semifinal where was defeated by No. 5 Kei Nishikori in straight sets. Besides, he took part in the Australia Open again – he reached the semifinal where he faced Roger Federer. Wawrinka lost the all-Swiss clash, recovering from two sets to love deficit and holding numerous breaking points in the opening games of the 5th set only to ultimately lose 3–6. Federer eventually became the winner of the tournament. Despite Wawrinka lost, he got the 3rd place in the world rankings.

While playing in Wimbledon, Wawrinka injured his knee. As a result, he stopped performing and retired. In August he announced he would undergo surgery.

The sportsman got back to playing in 2018 – he entered the 2018 Australian Open. There he was beaten by Tennys Sandgren in straight sets. Shortly after he took part in the Sofia Open, where he lost in the semifinals to Mirza Bašić. The player got injured again and missed three months of playing. His first Tournament after the recovering was the 2018 Italian Open where he lost to Steve Johnson in straight sets.

The 2019 season was opened by Wawrinka’s participation in the Qatar Open. He got to the semifinals but lost to eventual champion Roberto Bautista Agut. That time he also took part in the French Open. He won his first two matches against Jozef Kovalík and Cristian Garín before beating Grigor Dimitrov for the third time in the last four majors. He firstly got to the Grand Slam quarterfinal in two years but was defeated by Roger Federer.

Wawrinka’s net worth is evaluated at $16 million.

When it comes to Wawrinka’s playing style, he is described as a powerful offensive baseliner capable of playing well on most surfaces, especially on clay and hard courts. Remarkably, his fast serve has reached as high as 232 kilometers per hour (144 mph).

Wawrinka and Novak Djokovic have faced each other in 24 matches. Both are thought to be severe players.

Wawrinka outwon Djokovic at all three Grand Slam tournaments which he won. Besides, Wawrinka and Djokovic competed in three consecutive Australian Opens.

Totally, Djokovic has 19–5 overall record against Wawrinka. However, the latter leads Djokovic 2–0 in Grand Slam finals and 3–2 in all finals.

Another Stan’s famous opposer is Roger Federer with whom he competed 25 times head to head. Federer leads 6–1 in Grand Slam tournaments, 17–0 on hard courts, 1–0 on grass courts and 4–3 on clay courts. Generally, Federer has always been stronger than Wawrinka. Interestingly, in spite of their court rivalry, the two are good friends outside the games.

Remarkably, in 2014 a scandal between Wawrinka and Roger’s wife Mirka Federer occurred. So, she called Stan Wawrinka a 'crybaby' on court. Subsequently, Wawrinka became so angry after the match - which Federer won on a third-set tie-break - that the two men began arguing and had to be ushered into a makeshift gym at the side of the court to sort out their differences.

The two played against each other 19 times. Andy Murray leads 7–4 on hard courts and 3–0 on grass courts while Wawrinka leads 4–1 on clay courts. They have also met 6 times in Grand Slam tournaments, and the result is tied 3–3.

And again – Wawrinka’s opposer Murray leads the majority of their rivalry.

A famous tennis player Rafael Nadal has also competed with Stanislav – they have battled 20 times. They have faced each other in several prestigious tournaments. Nadal has won the first 12 encounters.

Wawrinka married Ilham Vuilloud, a Swiss television personality, and former model, in December 2009. The pair welcomed their first child, a daughter, in 2010. The relationship, which was frequently plastered throughout the Swiss tabloids, was never easy though and, in 2011, the media began reporting that Wawrinka and Vuilloud separating.

Vuilloud had said that Wawrinka was leaving the relationship to focus more on tennis. Later Wawrinka released a statement on Facebook announcing, an official, separation.

In 2015 Wawrinka started dating a new girlfriend - Donna Vekic. Vekic, also a professional tennis player, a native of Osijek, Croatia. She played her first amateur match at the age of six in 2003. Vekic has won over $800,000 overall.

Vekic said she was initially «good friends with Stan Wawrinka and Fernando Verdasco.» She also often has playful exchanges with the Swiss superstar on Twitter.

However, the dating rumors didn’t really pick up until July, when Vekic was spotted in Wawrinka’s player’s box at Wimbledon. Just a couple months earlier, Wawrinka officially announced his divorce from Ilham Vuilloud.

Stanislav Wawrinka has some tattoos. One of Wawrinka’s ink, unsurprisingly, reflects his tennis weltanschaung. On the inside of his left arm are the words of poet Samuel Beckett:

He did the tattoo in 2013, but first saw the quote a long time ago. It always stayed in his mind, according to the player. It’s how he sees life and tennis. The meaning of the quote doesn’t change, no matter how well you do. There is always disappointment, heartache – Wawrinka shares his thoughts.

«You are losing almost every tournament. You need just to accept it and be positive because you are going to lose and fail.»

On the inside of his right arm is the name of his daughter: Alexia.

In his career, Wawrinka got three Grand Slam titles at the 2014 Australian Open, 2015 French Open and 2016 US Open, where he defeated the No. 1 player in the final on all three occasions, reaching the final of the 2017 French Open, winning an ATP World Tour Masters 1000 title at the Monte-Carlo Masters in 2014, and reaching three other finals at 2008 Rome, 2013 Madrid and 2017 Indian Wells.