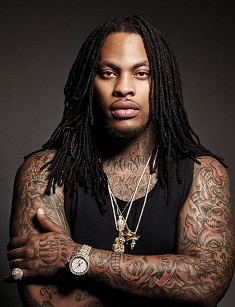 The native of South Jamaica, Waka Flocka Flame, is well-known as a rapper. He got wide acclaim in 2009, thanks to his first top songs “Hard in da Paint”, “O Let’s Do It”, and “No Hands” (featuring Roscoe Dash and Wale), which is his career’s highest-charting single. The rapper is currently signed with the label 1017 Brick Squad.

He owns his own brand of personal training named Alex Fine Performance. Juaquin is a cast member of the VH1 reality show Love & Hip Hop: Atlanta. He had a daughter, Charlie (born on July 1, 2005). His net worth is roughly estimated at $7 million.

Juaquin is from The Southside, located in the borough of Queens in New York City. He was born on May 31, 1986, in an upper-middle-class African-American family. Soon after his birth, they moved to Georgia. Debra Antney, Juaquin’s mother, was the CEO of a major artist management company. However, Waka was not interested in music for a long time. He liked playing basketball, spending all his free time in courts.

At the age of 14, Juaquin lost one of his older brothers, who got killed in a car accident. That event influenced him a lot. He started spending all day on Atlanta's streets and communicated with, hanging out with ruffians. Some years later, Juaquin found himself in music. At the same time, his mother became Gucci Mane’s manager, who was a novice in the rap field.

Waka watched Gucci’s performances and listened to his music. He was deeply affected. That was the last reason to start a professional career. So, Waka started making first beats and rap. Gucci Mane was their family’s friend, who named Waka as “Flocka Flame”. The name “Waka” came from Juaquin’s cousin and was given in honor to Fozzie Bear.

The debut mixtape of Waka appeared in 2009. It was called “Salute Me or Shoot Me”. His single “O Let’s Do it” had great success. It was among the best 100 singles in various music charts. A newcomer artist became well-known around the US thanks to his next mixtapes and singles. So, he signed with 1017 Brick Squad of Gucci Mane.

Waka was dissed badly for the pure lyrics of his music in 2010. Soon, Mane laid Waka’s mother off the work. In October 2010, Waka issued his first studio album called “Flockaveli”. It was highly estimated and got wide acclaim among the fans. It helped to debut at No.6 on the Billboard 200.

The same year Waka recorded a song “Head of State”. The music video was uploaded on YouTube. It was a rap parody, where Waka looked like a president Barack Obama. Baracka Flacka Flame, the song’s author, sang: “I'm the head of the motherfucking state nigga”. Waka said about the record: “It is a track for my president”.

There were gossips that the retirement of Waka’s mother could break down the agreement between Waka, who will go vs. Gucci. The head of the label denied them soon, appearing on the promotional event for the debut album of Flocka Flame. Soon it found out, that Waka will issue an album ft. Gucci.

Waka released several mixtapes and singles in 2011. He worked in collaboration with Slim Dunkin, Gucci Mane, and even released one track “Round of Applause” ft. Drake. In 2012 Waka recorded “Lights down low” and issued the second studio album, “Triple F Life-Friends” featuring many popular rappers. It was one of the reasons for the commercial success of the album. It became No.10 on the main US chart.

Announced in 2013, the third studio album of Waka hasn’t still appeared. The date of issue was delayed many times. And Waka worked on his mixtapes. They were released back to back. In 2013 Waka said some words vs. Eminem, who issued “Rap God” and briefly mentioned Waka. The Queens native revealed that he found the mention from Em to be more of a compliment than a diss.

By 2014 Waka issued 18 mixtapes. Also, the same year, the rapper released the first song of his promised album. However, the participant on the VH1 show “Love & Hip-Hop: Atlanta” didn’t allow him to finish the album. Next year he released a soundtrack to the movie “Pixels”, called “Game On”.

“This is not a game now, nobody can save you”.

In 2018 Waka released his single “Down Bad”. In 2019 Waka canceled his concert at UNC Charlotte following a deadly shooting on campus.

Juaquin has endured a lot of tragedy in his life. He lost one of his brothers in a car accident when he was 13. In 2011 a member of Waka’s Brick Squad Monopoly crew was murdered during an argument in a recording studio.

Two years later, his younger brother, Coades Scott (stage name KayO Redd), died. The cause of his death wasn’t released officially. Some reports said it had been a shooting in his old neighborhood, and others had mentioned suicide. In fact, an alleged tweet from Waka himself said that it was suicide, but that tweet was quickly removed and is no longer visible in the rapper’s feed.

In May 2014, the newbies of the 3rd season of the VH1show Love & Hip Hop: Atlanta, Waka Flocka, and Tammy Rivers tied the knot. She was a fashion designer, musician, and entrepreneur. They are both the parents to his daughter, born from the previous girlfriend in 2005. Their daughter’s name is Charlie.

Waka took his health in a positive direction the same year. He started eating organic. Flocka’s stunning transformation was noticed by his fans, going to start eating organic too. A lot of pictures appeared on the Internet with his body shames before and after.

Also, Waka Flocka is a soccer fan and supports Atlanta United. He often visits their home and away games. Waka is Atlanta’s ambassador. Charlie also likes playing soccer, chose that sport in 2015 after failing fourth-grade PE. Waka Flocka said about this:

"She is smart girl. I thought she was trying to finesse me, but that's the only sport she'll go see".

In 2010 the rapper was shot in the arm in what he said was an attempt on his life, not a random burglary as police initially said. The following morning, he intended to get an oil change for his car but wanted it washed first. The shooting took place at the Bubble Bath car wash.

Waka was arrested in January 2011. His arrest stemmed from a warrant issued after a raid on his home in Atlanta a month earlier, during which authorities were said to be investigating a prostitution organization but instead uncovered drugs and guns on the premises.

Waka's mother and manager, Deb Antney, who was home at the time of the raid, along with Waka's associate Gucci Mane, fiercely denied the prostitution allegations. Although Antney and Mane were detained while police searched the home, neither party was charged. Waka posted bail and was released in two days.

In 2014 Waka was arrested after a handgun was found in his carry-on bag during a security scan at Atlanta's airport. According to police, he didn't have a weapons permit and was charged with carrying a weapon in a prohibited place. He was released two hours later.

At present, Waka's net worth is estimated at $7 million.

There are two studio albums, 28 mixtapes, and 41 singles.