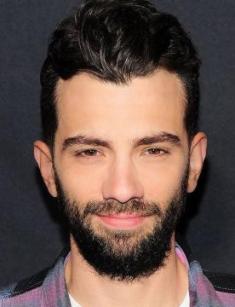 Viewers usually do not know who gives his or her voice to cartoon characters. After all, as it should be, the voice actors are behind the scenes and hidden from the attentive eyes of strangers. However, this is not about Jay Baruchel, who is known to the public as an actor in movies (for one of them he even received two awards), and as a voice actor. It is he who "speaks" for Hiccup in 3 parts of the cartoon How to Train Your Dragon.

Jonathan Adam Saunders, or Jay, was born on April 9, 1982, in Ottawa, to Robyne, a freelance writer, and Serge Baruchel, an antiques dealer, and was their first child. Five years later, Jay'd got a younger sister, Taylor, who decided to connect her life with the art of acting as her brother.

It is known that the father of the future celebrity comes from Paris, France, and his parent came from Egypt. As for the mother's close relatives, they are from Nova Scotia. An interesting fact: Jay memorialized his belonging to the country on his own body in the form of an impressive maple leaf on his chest, and also he tattooed the Celtic cross and his mother's surname (Ropell).

The boy demonstrated his interest in a truly male sport, hockey. He did not miss a single "ice battle" of the adored Montreal Canadiens. It was the city where Jay spent his early years, as his family moved to Montreal when he was six months old.

"The hockey I was raised on, the hockey I understand, the hockey that my dad taught me about when I was a boy was intrinsically connected with fighting. I grew up in a house where we revered tough guys." - told Baruchel about his life in one of the interviews.

His father also played softball with the son. But at the end of their training, the father always sent Jay at home to read comics. Talking about his childhood, Jay remembered that once the family was going through hard times when money was not always enough. But his mother, Robyne, still found money on books, and the son learned to read already at the age of 3 or 4. He even tried to write stories himself.

He especially liked the movie industry. At the age of 9, the child announced to his parents about his desire to become a film director. Parents favorably accepted his son's admission. They often put him next to them to watch the next movie and made pauses to give their own comments and explanations.

In primary school, the boy had a high enough height for the time (now the height of the actor is 6'0'' or 183 cm, and the weight is about 144 lbs or 65 kg), which prevented him from the traditional way of arguments with the use of power. However, thanks to Serge, Jay was ready for that. In high school, the teenager together with friends filmed the weekend videos that he always showed to his parents and discussed them.

The guy began his professional acting career with episodic roles in the television series My Hometown and Are You Afraid of the Dark? At the same time, he tried his hand as a host of one of the local TV shows for children. In one of the first full-length comedy films Almost Famous, Jay turned into a devoted fan of the cult Led Zeppelin.

One can hardly say that Baruchel was unemployed before starring in the sports drama Million Dollar Baby, which earned four Oscars and brought the actor the real fame. However, it was challenging to shade such brilliant actors as Morgan Freeman and Clint Eastwood.

In 2009, Jay played in the second part of the Night at the Museum: Battle of the Smithsonian and The Trotsky, where he got the role of Leon Bronstein. And a year later he began to voice Hiccup in the children's favorite story about the friendship of a boy and a dragon. Then Jay Baruchel appeared in This Is the End, where the young actor didn't need to try on someone else's image but needed to be himself in the most real sense of the word.

Jay has a successful acting career. He had a chance to collaborate with director David Cronenberg in Cosmopolis.

"Literally a dream come true. That man has been one of my heroes and idols since I was about 13. I adore his movies and his body of work is something that all Canadians can take proud ownership of. When I was asked if I'd be interested in doing two days on the new Cronenberg film I said "yes, yes and yes" without having read the script." - said the Canadian actor.

The personal life of Hollywood stars is the object of close attention of the public and journalists, especially such a charming man as Jay Baruchel.

It is known that in 2004, he had a short and close relationship with his colleague Sarah Lindh. The guy starred with her in the lead roles (drug dealer and his girlfriend) in the feature film Fetching Cody. But the filming ended as well as the relationship between the young people.

Later the actor had an affair with his compatriot and colleague from Goon, actress Alison Pill. The couple got engaged, but their relationship did not end with a marriage. According to one version, the lovers could not stand the test of feelings at a distance. However, after the breakup, they managed to preserve their friendship and even star together in the second part of the story about hockey player Doug Glatt.

According to his personal account on Instagram, Jay's heart is again occupied. His fiancee is model Rebecca-Jo Dunham, or, as the actor tenderly calls the woman, "the angel of glam rock, sent from heaven only to him" and "the love of his life." The couple willingly shares their happy photos with followers.

Jay has a net worth of $6 million.

On February 22, 2019, the animated film How to Train Your Dragon: The Hidden World was released in the United States. Jay Baruchel was a voice actor and again voiced Hiccup.

Earlier, in early February of the same year, the dramatic movie The Kindness of Strangers starring the Canadian actor was premiered at the Berlin International Film Festival. It is also known that Jay directed and starred in Random Acts of Violence and directed The Ten O'Clock People.